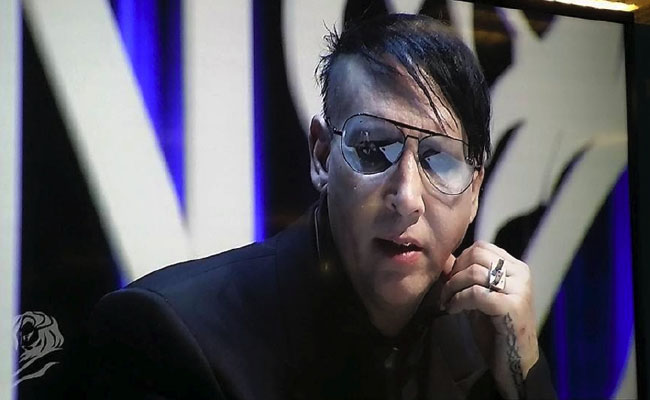 Two days into my first Cannes Lions International Festival of Creativity and I’m already bursting with inspiration. The highlight for me so far has to be the incredibly personal interview with one of my all-time favorite artists Marilyn Manson. Grey Group Worldwide Chief Creative Officer Tor Myhren sat down with Manson in front of a jam-packed house for what would turn out to be an hour long conversation around creativity, inspiration, and storytelling.

This was the perfect session for me as two of my favorite passions collided; music and marketing. And Marilyn Manson is the perfect candidate to speak on creativity: he has redefined what it means to be a rock star in this modern age. In fact, Spin Magazine recently named him as the last of the great rock stars. True rock stars are have an unexpected nature, they are unpredictable and they are constantly evolving. Manson’s latest masterpiece The Pale Emperor embodies each of these attributes and his onstage presence continues to personify them around the world. Read on for five insights from one of the most controversial artists of our time.

Five lessons marketers and creatives can learn from Marilyn Manson

Timing is everything when it comes to creativity.

Manson spoke in detail regarding the evolution of his creative process around writing music. He used to go into the studio at 3am to write, but then considered advice from his manager, who told Manson “Nothing good ever happens after 4:30am.”

Heeding that advice, Manson started working at 3pm with surprising results. “There’s chaos in my head at 3am from all the things that have been running through my mind all day long. When I started recording at 3pm that chaos wasn’t there. That’s the time when my mind could be an artist.”

The Importance of Branding.

Before Manson ever wrote a note of music he built his persona.

He had his stage name and show completely thought out before he ever wrote a song. It was then that he booked his first show without any music, which forced him to write songs. When asked if he was worried about his image overshadowing his music he replied “I’m not worried the my image will overshadow my music, I’m worried that my music will overshadow my image. You don't want to become a caricature of yourself.”

You can’t sell something that’s fake.

As one of the last real rock stars, Manson knows the importance of being real. “The only difference between me being on stage or off is that offstage I’m talking to people I know. When I’m singing it’s to people I’ve never met before.”

As a marketer, I found this concept really resonated with me, because I think that consumers can see right through marketing that tries to hard to be something it’s not. Messaging that is not authentic will be seen as irrelevant and lead to bad experiences with content. Manson stays consistent with his persona which adds to his credibility as an artist. He knows who he is and doesn’t stray from it.

The cream will always rise to the top.

Manson touched on how technology lowers the barrier for entry as an artist, but that’s not necessarily a bad thing. “There were a lot of people afraid of GarageBand. They were thinking that because anyone could now make music that the market would be flooded with bad artists. But there have always been pianos and guitars,” he pointed out. But that didn’t mean everyone became a musician.

I think the same could be said regarding content marketing. The barriers for entry have been lowered, but not everyone is creating great content – and not everyone is going after your target market.

Stay true to yourself but keep evolving.

Manson’s artistry has evolved quite dramatically since he first released his debut record back in 1993. He’s even branched out to painting and becoming and author with the release of his autobiography. “I want new fans. I don't just want to create for my existing fan base.”

As any great marketer knows, you can only create so much value from a static database. It’s important to continue to evolve your marketing to reach new prospects.