How to Drive Execution with Executive Compensation

I've argued that this is The Decade of the CMO, and it's important that the CMO, as an increasingly crucial executive in driving not only top-line growth but bottom-line performance, play a bigger role in company-wide leadership.

This is the second of a planned three-part series on how to more effectively lead. In my first post, I talked about the right way to put together an annual plan. Now that you’ve planned what to do, it’s time to do what you planned. And in this post, I’ll discuss one powerful lever for driving execution: bonuses.

If your company is very early (10 or fewer customers), then most likely, you’re thinking about hiring the first few sales and marketing folks and ramping up demand generation. If your startup has more than a couple of million in revenue and dozens of customers, you probably have a few executives managing a number of teams.

Regardless of what stage you’re at, driving execution always requires ensuring that the team—especially, the executive team—holds overarching company goals and specific individual performance in equipoise. These two results often conflict, and sometimes contradict each other. But your company cannot and will not succeed if you’re unable to nurture both of these possibilities simultaneously in the hearts and minds of your team.

There are a number of ways to skin this Schrödinger’s cat. Equity is the most obvious; culture is the most critical. But another shaft that CEOs have in their quiver is the bonus plan for their executives. When structured smartly, the executive bonus plan is a potent instrument for driving alignment around shared goals and incentivizing cross-company collaboration.

In my experience, the best executive compensation plans are designed around the following principles:

1. One metric to rule them all. Decide on a single metric as the team’s overriding goal. This is probably the most contentious recommendation. After all, different executives are accountable for different aspects of the business, and shouldn’t their compensation be linked to what they can control? Moreover, how do you decide on the most important metric for the company? And does that mean that other metrics don’t matter? My response is that a bonus plan is just one tool, which isn’t going to solve for all problems. But the more metrics you try to incorporate into the plan, the more sprawling it will be and the less likely it will be to affect behavior.

Once you do choose one metric to focus on, then of course the question is which one. Should you use revenues or bookings? Net Promoter Score or payback period? The answer depends on the nature of the business. For most enterprise companies with a SaaS business model, that one metric is net new Annual Recurring Revenue. Net new ARR factors in bookings, churn, and expansion/upsell. It’s also the best indicator of enterprise value created in any time period.

2. Surge protector. The obvious risk with linking compensation to any one metric is that becomes pursued blindly and at all costs, while other important goals for your startup are ignored. If net new ARR was robust and rising, but suddenly payback period increased by 50 percent; or net cash burn was 25 percent higher; or NPS dropped materially—your business would not be a healthy position on balance. It’s a valid concern. In my experience, most of the answer lies in the management processes that you put in place (more on that in my next blog post).

In the meantime, I find that its useful to take the second most important metric for the business and use it as a grounding mechanism: bonuses are only paid if the company meets its target on that second metric. This will establish safe thresholds for the company, by keeping executives from flying off the rails single-mindedly chasing after one goal. In many of my early stage portfolio companies, we have used net cash burn as the second metric, given the implications of running out of cash for most start-ups. At a later stage, NPS or gross margin may be more appropriate.

3. Stronger together. While each executive will likely have a different mix of fixed and variable compensation, you should design the masterplan such that the entire executive team is yoked to the same essential bonus schedule. In other words, their rewards are triggered by meeting/exceeding the same aims, in proportion to one another. So, if the company misses its net new ARR goal, then the VP of Engineering takes as much of a relative hit as the VP of Sales. This helps create an “esprit de corps,” feels equitable, and is simpler to manage.

4. Partial credit. Another key decision is how much of a “stretch goal” to set. This is a subjective choice, but it’s critical to set up the plan such that people feel that there’s a realistic chance of making money. An incentive plan that’s unlikely to offer me any benefit, will be equally unlikely to affect my behavior—at least that’s what my kids keep telling me.

I therefore advise CEOs I work with to set a target that has at least a 75 percent chance of being met. In addition, I recommend that you design the incentive structure so that executives get paid some bonus (half to two-thirds of their target bonus) if the company achieves 75-80 percent of the goal. This is really important to keep the team pushing hard even when it’s clear that you are not going to achieve the full goal.

5. Bonus points. Similarly, you should create some sort of “kickers” for exceeding the goals, to incent people to keep pushing for that last deal. My advice is to scale the payouts linearly up to 100 percent of the goal, but then ramp up payouts at 1.5x up to 120 percent of plan and 2x beyond that. These numbers are directional and a lot depends on how aggressive the plan is.

Below is an example of an exec comp plan from one of my portfolio companies (name removed) below to bring these principles to life. In my next post, I’ll get into how to use OKRs to drive both alignment and accountability. 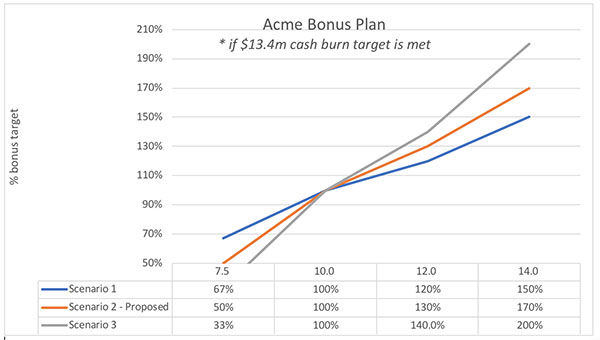 P.S. – If you’ve read this far and want a copy of the spreadsheet, email me (ashugarg at foundationcap dot com).

To keep pace with the latest in how digital is elevating the role of the marketing department, subscribe to the LinkedIn Marketing Blog today.