So Long, 2010s: Reflecting on a Decade in Marketing and What’s Next

Editor's Note: This post is part of an occasional LinkedIn Marketing Blog series, "Looking Back to See Forward," that kicks off the year by examining marketing's recent past to see the way forward in 2020 and beyond. Read the first post in the series.

The arrival of a new decade provides us with a timely opportunity to step back and take stock. How has marketing changed in the past 10 years? What were the clear improvements, and the shortcomings? Most importantly, what have we learned and how can we apply this knowledge in the decade ahead?

For the most part, one can cleanly connect an overarching narrative to each of the three decades preceding the 2010s:

There are a number of different storylines that could be presented as the prevailing theme for the previous decade. Let’s explore a few, and what they meant.

What Trends Defined Marketing in the 2010s?

From big data to customer-centricity to content strategy and beyond, these are the seismic shifts that ruled the 2010s for marketers.

The Decade of Big Data

As the “information superhighway” started coming into its own, companies and marketers tapped new ways to harness the immense volume of data being democratized by the web. This enabled new levels of segmenting, personalization, and customer insight. By decade’s end, brands were widely pointing to customer data as their most important consideration. It's the theme of many books, including The Big Data-Driven Business, written by Russell Glass and Yours Truly.

The increased focus on data also paved way for technologies such as automation, machine learning, and AI to play significant roles in marketing’s evolution.

On the flip side, the continuing emergence of big data brought along new data privacy laws and regulations, designed to provide consumers with protection and ownership over their personal information.

The Decade of Customer Empowerment

With everyday people finding new platforms via social media, blogging, online reviews, and the like, customers became empowered like never before in the 2010s. No longer were brands controlling the conversation. No longer could frustrated voices be silenced.

Meanwhile, customer advocacy and word-of-mouth elevated as coveted ideals for marketers everywhere. Along with the rise of big data and the new digital norm came a thinning of patience toward irrelevant and spammy promotions, contributing to greater distrust in brand messaging generally. As such, the influence of peer recommendations became magnified.

Customers also grew more autonomous in the way they go about making purchases. The increasing ease of accessing information via the internet led to people researching on their own, rather than relying on advertisers or salespeople to guide them. As ecommerce and on-demand services took hold, customers gained further independence. These trends have fundamentally shifted the marketing landscape, completing the transition from push to pull.

Content marketing had already taken a seat at the table by the start of the decade. But back then, the main priority was simply to create more. When Content Marketing Institute (CMI) released its first B2B Content Marketing Benchmarks, Budgets and Trends report in 2010, the top challenges cited by marketers were all tied to production and volume 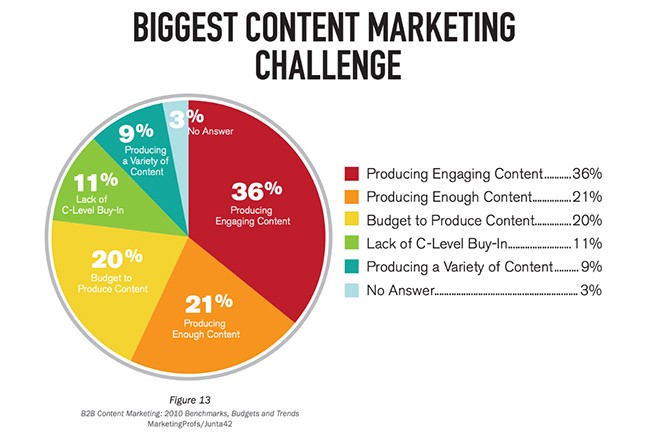 In the nine years since, rampant content production without the proper strategic backing has led to oversaturation, and an imbalance between quantity and quality. As such, practitioners are now simply trying to wrangle it all in, find clear and consistent direction, and get more out of their content. 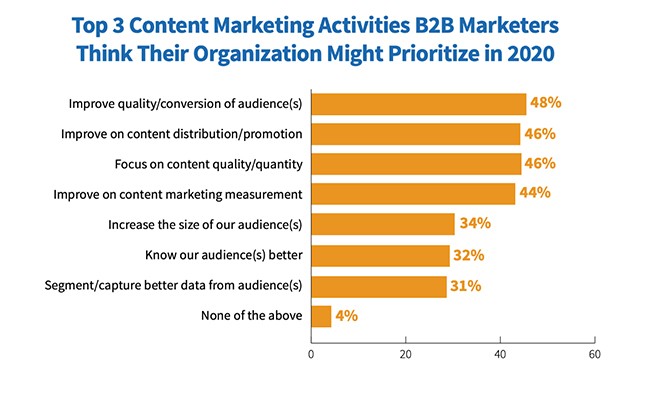 The Decade of Social Media Maturation

Yes, many of today’s most popular social media platforms first appeared in the 2000s, but in this past decade we’ve really seen them grow up, and skyrocket in popularity. From 2010 to 2019, the number of global social media users rose from less than 1 billion to nearly 3 billion. At the start of the decade, 42% of U.S. adults were on at least one social media site; by early 2019, that figure was up to 72%. 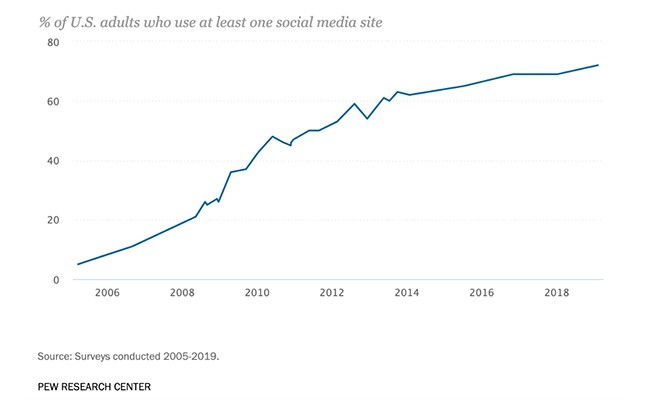 We’ve certainly witnessed this dramatic growth in our corner of the social sphere. In 2010, LinkedIn had 70 million members. Today, we host more than 660 million professionals around the world.

While adoption has steadily increased, social media networks have grown more robust, functional, and feature-packed. Surveys show that the average person spends around 2.5 hours per day on social networking and messaging platforms, making this channel impossible for digital marketers to ignore.

The Decade of Mobile Marketing

From 2011 to 2019, mobile internet saw a 504% increase in daily media consumption. What once was a relative niche has now become the standard. Whereas mobile optimization and responsiveness were nice-to-haves 10 years ago, they are now essential. Search algorithms and actual users alike punish pages that don’t display and perform properly on the small screen.

The Decade of Video and Live-streaming

As internet speeds have gotten faster and faster, video streaming has become more accessible and commonplace. The appetite for video is undeniable and all the more prominent with mobile’s aforementioned rise.

Live broadcasting, in particular, has found its footing. The tremendous growth of Twitch, a live-streaming service that launched in 2011 and now boasts more than 15 million daily users, has made the format’s allure blindingly clear to content creators everywhere. As such it is no surprise that live video has gained considerable traction for marketers, though it feels like the peak is still yet to come for this tactic.

Which Trends Will Define the 2020s?

At this point, we can only speculate. But in following the trends that have led us up to this point, here are some educated guesses on the major marketing movements we’ll be looking back and reflecting upon come 2030.

Whatever should come along in these next 10 years, we look forward to sharing the ride with all of you. We may be biased, but we think advertising on LinkedIn is a trend that will continue to grow in the coming decade. Get started on LinkedIn Campaign Manager today.