The Rise of Mobile Messaging Apps, and Why Marketers Need to Take Notice

The way human beings communicate is evolving before our eyes. If marketers haven’t gotten the message yet, then it’s high time.

The purpose of our profession can be sliced and diced in many different ways, but comes down to two core necessities: meeting our audiences where they’re at, and getting through to them with a compelling message. If we fail to achieve these basic objectives, we fail. Period. It’s why brands focus relentlessly on gaining visibility in search engines, and on social media.

The bottom line is that as marketers, we need to be turning our attention to the same places customers (aka people) are turning theirs. And a look at the trends makes clear one of those places is mobile devices – specifically, the messaging apps that continue to gain popularity at a staggering pace.

The Rise of Mobile Messaging Apps

Back around the turn of the century, cell phones were still new to the consumer public. Text messaging was an unfamiliar convention, and back in those early days, many provider plans charged users a fee for each SMS (short message service) transmission sent or received. If you were the parent to a teenager in those days, you might recall receiving at least one obscene monthly bill by surprise. (And if you were a teenager, you might recall getting an earful about it.)

Thankfully, most plans soon transitioned into unlimited free texting, and from there, all bets were off. According to Rebtel, Americans sent an average of 0.4 texts per month in 1995, but by 2011 that figure had exploded to 357. More recent estimates land in the range of 3,000 messages per month (!).

The appeal of this communication style is easy enough to understand: it’s quick, easy, convenient, and on-the-go. But text messaging itself doesn’t offer many bells and whistles. So the rise of SMS messaging has been shadowed by the rise of mobile messaging apps and increased social media chat functionality.

Chances are, you’ve interacted with someone on at least one of these apps: Facebook Messenger, WhatsApp, WeChat, Snapchat, LINE, and of course LinkedIn’s messaging feature.

Data from eMarketer shows that in 2020 there are around 2.7 billion mobile phone messaging app users worldwide, and that number’s expected to grow to 3.1 billion by 2023. That’s nearly 40% of the global population. 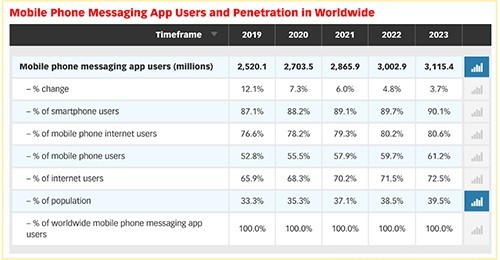 This is the new norm. And for marketers, it presents many intriguing possibilities and opportunities.

The proliferation of mobile messaging apps aligns nicely with one of the most prominent trends in digital customer engagement: direct and conversational marketing.

This piece from Harvard Business Review lays out the advantages of an approach merging these two frontiers in a purchase follow-up, for example: “Messaging provides a continuous thread between customer and brand, unlike the disjointed experience of email. An order confirmation email, even one prompting further action, often dies in an inbox, but conversation on messaging apps is more like an ongoing dialog. This difference makes follow-up conversation easier and more natural, increasing the opportunities to cross-sell, encourage sharing, solicit input, and flow seamlessly between commerce and support.”

Simply put, a marketing strategy that places messaging and conversations at the forefront enables brands to be more:

It comes as no surprise that, per AdWeek, 68% percent of consumers prefer communicating with businesses via messaging.

Talking To Customers, Rather than At Customers

The age of pushy, broadly distributed, one-sided brand messaging is reaching its end, if it hasn’t already. Going forward, savvy marketers will be devising every campaign and program with opportunities for customer interaction and engagement in mind. And these efforts will focus on channels that people are naturally gravitating toward, such as mobile messaging apps and social media chat.

If we as marketers get that message, and operationalize it, prospects and customers will be far more likely to get our messages.

At LinkedIn, we’ve got big plans for this year when it comes to messaging and conversational marketing. Stay on top of the latest updates by subscribing to the LinkedIn Marketing Blog.