One Marketing Metric to Rule Them All

Editor's Note: This post was contributed by Joe Pulizzi, best-selling author and founder of the Content Marketing Institute. His fourth book, Content Inc.: How Entrepreneurs Use Content to Build Massive Audiences and Create Radically Successful Businesses, is now available on Amazon and Barnes & Noble.  Download a free chapter here.

After Facebook’s IPO in 2012, the stock dipped by over 50 percent, down to less than $20 per share. Since then, Facebook’s value has more than quadrupled. The major reason, according to a Fast Company article, is a revision Facebook made to its management and performance structure.

During the time Facebook’s stock was struggling, Facebook’s ad team had been responsible for revenue, while the product team was focused on user engagement. After months of lackluster results, and a clear lack of a unified team effort, Facebook decided to reward all its employees on their performance against a single metric: revenue. It was argued that, “the enterprise would get a whole lot more ideas, and they would be better, more creative, more diverse.”

And, boy, did this change work. In November of that year, App Ads came out, representing a true collaboration between the ad team and the product team. It was a game-changer and added over $1 billion in revenue.

Finding your one metric

As Andrew Davis states, “focusing on creating a subscriber database is developing a customer database before you actually have customers to sell to.”

As with a subscription to Netflix or (in days past) a newspaper, your goal is to deliver such amazing value through content that your audience is willing to give some piece of personal information up as a value exchange (email address, home address, etc.). The only difference in your situation from the Netflix example is that you are giving your content away for free, so you can monetize that relationship at a later point.

John Jantsch, founder of Duct Tape Marketing, followed a Content Inc. strategy, including a community blog effort and book series, to grow a multimillion-dollar consulting practice. But John’s lightbulb moment came when he added a “sign my guestbook” area to his website in the early 2000s. Instead of just looking at website traffic analytics, John was beginning to build a subscriber database.  And that made all the difference.

A breakdown of subscriber types

Not all subscribers are the same. Your goal is to build content assets where you have the maximum amount of control. This is especially true for the types of subscribers you attract. While I believe that any fan, follower, or subscriber can be a good thing, they are not equal in value.

For example, let’s say that you build your platform on Facebook. Over time, you’ve been able to attract 50,000 “fans” on that platform.

In November of 2014, Facebook made some drastic changes to its platform to hide posts from pages such as:

While this makes sense for Facebook’s business model to work, at the same time it means that Facebook has the right to not show certain posts. Facebook expert Mari Smith recently stated:

Bottom line, most pages can no longer rely on organic reach to gain solid business results on Facebook. You need to have a consistent content strategy … to drive traffic to your website and build your email list via ads.

I know some businesses that have seen organic reach on Facebook fall to 1% or less. At the same time, Scott Linabarger, former content marketing director at Cleveland Clinic, stated that some posts from the hospital saw up to 60% organic reach on Facebook. It really doesn’t matter though. You should leverage Facebook however you can, but you need to know that Facebook controls the ultimate reach, not you.

As you analyze your digital footprint and begin to build your audience, your focus needs to be at the top of this hierarchy. 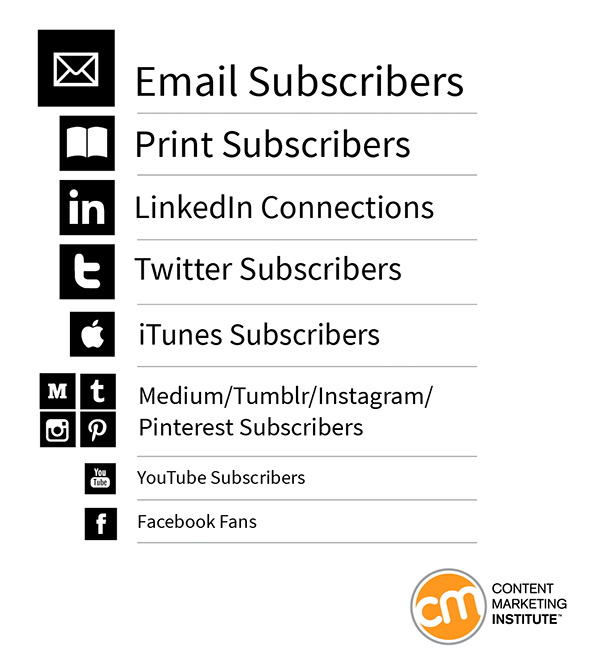 While you have more control with certain subscription options, Jeff Rohrs, CMO of Yext, and author of Audience, is adamant that no company “owns” its audience.

The reason that the audience is in different places is that no audience is owned. Regardless of whether you’re a major television network, pop star, or professional sports team with rabid fans, you simply do not own your audience. They can get up and leave — mentally or physically — at any time.

This is exactly the reason that offering amazingly helpful and relevant content is the only way to keep our audience connected to us, regardless of which subscription options you choose to leverage.

Now, sometimes it makes sense to focus on channels such as YouTube and Pinterest first to start a Content Inc. strategy simply because the audience is already there. But once you do build that audience, start to convert those people over to email subscribers as soon as possible.

So please, share content on social media, build up your followers on digital platforms, but do it to build your audience of email subscribers. Start looking at your content and instead of driving people to your product, drive them to content so good that they want to sign up for it, and subscribe to a content offering such as an e-newsletter.

Take the time to build a relationship with them first. Once you do that, your readers will be very willing to purchase, well, whatever you have that you are selling.

To get daily advice on getting the most out of your content marketing efforts, subscribe to the LinkedIn Marketing Solutions blog today!