Editor's Note: A version of this post originally appeared on Social Media Examiner.

Do you want to improve your LinkedIn ads?

Have you thought about running split tests (A/B tests) to see what your audience responds to?

Optimizing your LinkedIn Sponsored Content campaigns can help you better reach the people who matter most to your business.

Split testing is like putting together a puzzle: you need to test and iterate until you optimize every component of your campaign, including captions, images, calls to action (CTAs), and so on. And this should be the process for every campaign you run.

Tests often reveal that the smallest tweaks in your ads can make the greatest performance impact. Plus, your gut might not always be right. While you may be confident in your hypothesis, testing may prove you wrong. The following guidelines apply to all split testing on the LinkedIn ads platform. They’ll help you make sure you generate meaningful data for optimization.

For your test results to be truly meaningful (that is, good indicators of how to improve performance in the future), it’s important to get a large sample set; two weeks is the minimum amount of time recommended.

With that much data in hand, you won’t be misled by outliers. For example, if your three-day campaign includes a national holiday, that atypical data won’t skew your results. A longer runtime smoothes out those bumps.

Test One Variable at a Time

It was good advice in your high school chemistry class and it’s good advice in marketing. Your test campaigns should be identical save one single aspect you’re testing. For example, if you changed the headline and tried a different visual, it would be impossible to tell which change made a difference. 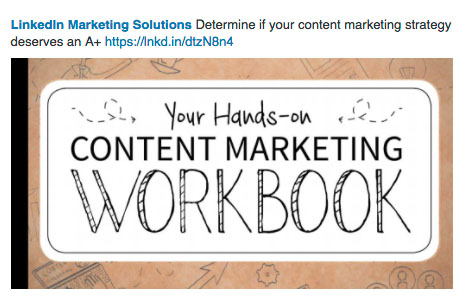 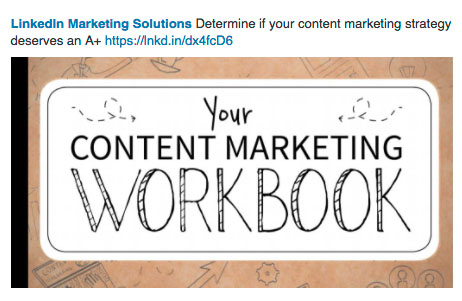 When trying to determine which audience is most responsive, you can split test targeting different groups. Just make sure to keep all other aspects of the campaign the same, save for the change in targeting. That includes the bid rate. There may be variations in bid prices due to audience and region, but try to find a middle ground for your bid.

When running a Sponsored Content campaign, you can gain more exposure and more optimization opportunities if you test multiple variations on your creative at once. Consider running at least four for any major campaign.

After some lead time, you’ll be able to optimize based on performance. Shift spending to the best performers, turn off the lowest performers, and replace them with new challengers.

While the automated option can be an excellent time saver, select the second option to get more meaningful data.

There are dozens of variables you can test, even in the simplest LinkedIn text ad campaign. Here are a few ideas to get you started.

You’ve heard it before: visual is the new headline. When you add more visual interest to your content, you get more attention.

Accompany every LinkedIn sponsored content post with a photo. A resolution of 1200 x 627 pixels will render best on the platform. Try creating some eye-catching visuals featuring short stats and quotes lifted from larger pieces of content, for example. 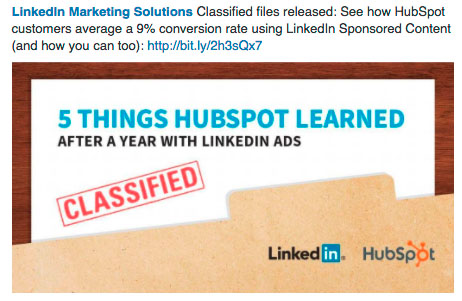 You can run a variety of tests on your images. For example, test whether rich media images perform better than linkshare updates with thumbnail image previews. 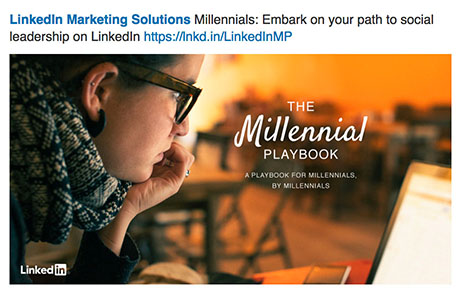 You can also test to see if an image of a person (or people) performs better than one of an object (such as the interior of a car).

Another image test to consider is to look at the performance of images with light backgrounds versus images with dark backgrounds. Does a darker background see more clicks than a plain white one? 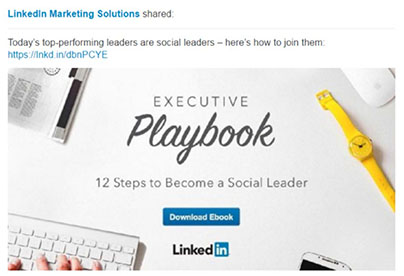 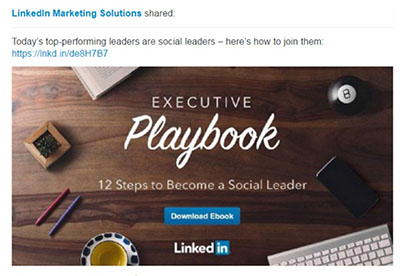 Finally, see if using an image to draw the reader’s eye to the CTA improves ad performance. 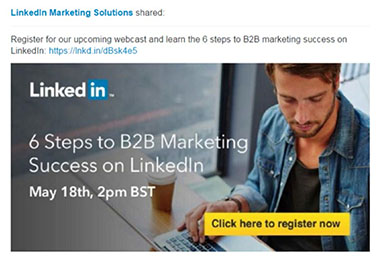 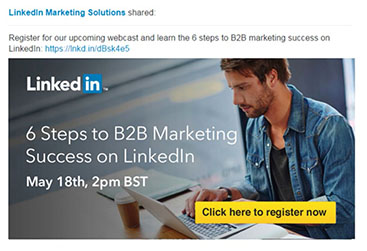 In the first image above, the model is looking directly at the CTA button, subtly drawing readers’ attention to it.

What a difference a word can make! Experiment with different copy in your LinkedIn ads to see if changing the wording makes a difference in performance. 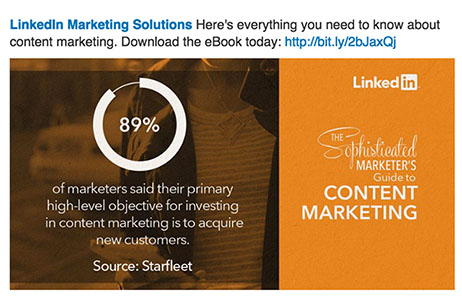 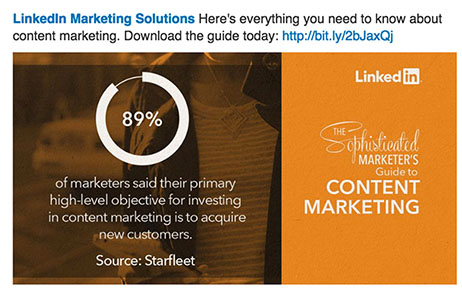 #3: Try Adding a Stat in Your Update

Test an update with a statistic and one without, and see which resonates best with your audience. 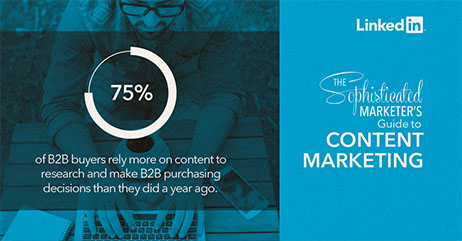 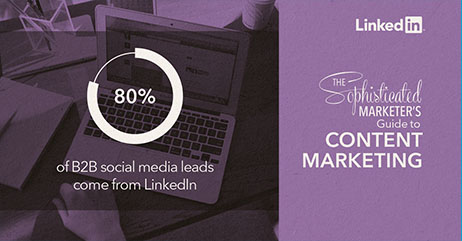 Your captions should be 150 characters or fewer. Does character count matter when the text is this short? Surely an audience can read 140 characters as easily as 70? Find out if you get a boost in engagement by getting to the point more quickly.

You can also test the headline, subheadline, and the CTA verbiage within an image.

For example, see if an ad with the CTA “get the ebook” receives more clicks and impressions than one that reads “download this research.” Also try varying the headline and subheadline, as in the examples below.

Tip: Typically you want to keep text on sponsored content to a minimum, but it’s important to test and iterate until you know exactly what audiences in different regions prefer. 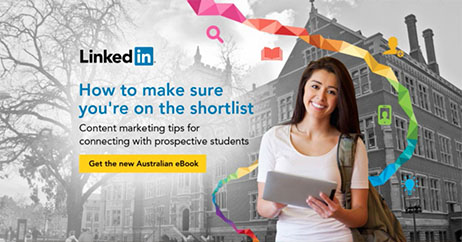 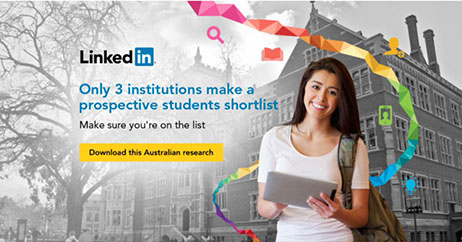 Remember: Keep testing and iterating until you find what copy and imagery resonate most with your audience.

The delightful challenge in marketing is that every audience is different. What works for one group may leave another group cold.

Take these tips back to your own marketing lab and use them as inspiration for your own experiments. Commit to ongoing testing and improvement because each piece of data you get from these tests will help you understand your audience a little better, and in turn improve your results.

For more LinkedIn marketing tips straight from our team to yours, download Spotlight on Best Practices: An Insider’s Guide to Effective LinkedIn Campaigns.