Though the term “content marketing” is a fairly recent invention, marketers have been using useful, informative content to drive brand loyalty for decades—even centuries. For this installment of Astonishing Tales of Content Marketing, we’re going all the way back to 1900. Read on to see how Michelin promoted their brand with innovative content for road trippers worldwide.

In 1900, Michelin was known for its innovative work with replaceable bicycle tires. They were just starting to produce tires for automobiles, and needed a way to promote their brand and increase demand for their product.

There were only 3,000 cars in France when the first Michelin Guide was published. Michelin had a chance to shape car culture while it was in its infancy. The Michelin Guide’s purpose was to create demand for cars—and thus tires—by providing a useful resource for French car owners to use on their journeys.

Michelin printed 35,000 copies of the guide and gave them away for free. The first guide had listings for restaurants, maps, and advice for trip planning. Over the next two decades, Michelin gave away a new guide every year, only interrupting their publishing efforts during World War I. They expanded their initial French offering, adding guides to Italy, Sweden, Northern Africa, and more. 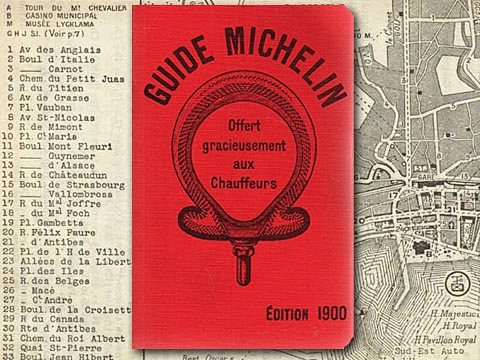 1920: Building a Reputation for Quality Advice

In 1920, Michelin made major changes in the guide that would make it a marketplace force to be reckoned with for decades to come. First, they eliminated advertisements within the guide and began charging for it, reasoning that “man only respects that which he pays for.” Then, they expanded their restaurant listings, which were the most popular part of the guide. Michelin employed a team of inspectors to dine incognito throughout France and rate their experience.

Michelin quickly established a reputation for reliable information on restaurants, and the guide’s reviews were more detailed with each edition. In 1926 they introduced a single star next to restaurants who provided an exceptional experience. By 1936, they had expanded to a three-star system.

These star ratings, reviewed and revised with each yearly edition, became a sought-after status symbol for restaurants throughout France. To this day, a restaurant’s fortune can rise or fall depending on Michelin’s trusted recommendation.

Fast forward to today, and Michelin has capitalized on their sterling reputation by taking the guide online, adding hotel and travel booking functionality. But even in the age of Yelp and Hotels.com, the printed versions of the guide remain popular. Michelin publishes 14 guides each year, covering 23 countries, and sells them in 90 countries.

So if you’ve ever wondered why the tire company with the inflatable mascot shares a name with a prestigious restaurant guide, now you know. Though they started with the simple goal of selling more tires, Michelin established themselves as a knowledgeable advisor for travelers worldwide. That’s a truly astonishing tale of content marketing.

Get the tips, advice, and strategies you need to inspire your own astonishing content marketing when you subscribe to the LinkedIn Marketing Solutions Blog.