In Defense of the Listicle

The listicle has gotten a bad rap in content marketing circles. Look around the web and you’ll find a litany of complaints registered against this trendy format. I’ve compiled a few here (presented in list form, of course):

Here’s the thing: these criticisms are not invalid. But that has more to do with the way listicles are generally done these days than the approach itself. (Note that I've been of a fan of lists since at least 1999).

So let’s take a step back and try to figure out where it all went amiss. We’ll drill down to the fundamentals of what makes listicles appealing and useful, with an eye on maximizing their almost unrivaled potential for clicks and shares.

What is a Listicle?

Defined as “a piece of writing or other content presented wholly or partly in the form of a list,” the listicle is an extremely popular and prevalent method of organizing and delivering written content. When you look at almost any list of popular or top-performing formats, the listicle will be there. Traffic-dependent sites like BuzzFeed churn listicles out like crazy because they reliably attract visitors.

Why is that? It really comes down to human psychology. We thrive on structure and simplicity. We tend to create shopping lists and jot down our ideas in list form for a reason.

In a piece for The New Yorker titled A List of Reasons Why Our Brain Loves Lists, Maria Konnikova explains why these types of articles are so effective at drawing us in. It starts with a headline that promises a specific number of items (often ranked) pertaining to a specific topic. These two components “create an easy reading experience, in which the mental heavy lifting of conceptualization, categorization, and analysis is completed well in advance of actual consumption,” Konnikova writes.

She adds that once we’ve clicked through, “Lists tap into our preferred way of receiving and organizing information at a subconscious level; from an information-processing standpoint, they often hit our attentional sweet spot.”

Think about every best practice you’ve come across for creating resonant and engaging content in a cluttered and ultra-busy digital environment. It should be focused, scannable, relatable, and compelling. Listicles give us an opportunity to check each of those boxes.

So why are they in the doghouse?

The Problem with Listicles Today

Last year, Kevin Alexander wrote a fascinating feature for Thrillist exploring the problematic aspects of listicle culture. In it, he lays out the dilemma: as the magnetic aura of lists became apparent to everyone in the content biz, quantity rose and quality sank.

Good, sturdy, reliable lists requiring on the ground knowledge and reporting were actually hard/expensive to make, and few places wanted to pay for that sort of reporting, so most lists just ended up plagiarizing off of the few good ones. And, as these lists increased in frequency while simultaneously decreasing in quality, you watched the collective trust in any one list diminish. — Kevin Alexander

Too often, the ideation and execution of a listicle goes like this: “We need a post that’ll bring in organic traffic so we can show some results. Listicles always work! Let’s do one on [Topic X], which we know our audience cares about. Just go cobble together some info from other lists out there and rearrange it.”

In many cases, this has accomplished its ostensible purpose of getting clicks (I’m telling you, those headlines are irresistible!), but what are they really achieving? Certainly not providing value to the reader, who has probably already seen all of its entries before, and isn’t learning anything new. Worse yet, these lists often become outdated and inaccurate because no one bothers to vet the details.

For these reasons, the listicle has largely earned its bad rap. But it is not beyond saving. We don’t need to retire this format, we just need to rethink it.

The hunger for list articles still exists, but as content marketers we should be aiming to be part of the solution, not the problem. Here are tips for returning substance and value to the listicle format:

Create fewer listicles that include more insight and original research. And within those listicles, don’t feel obliged to shoot for some ridiculously high number. BuzzSumo analyzed more than 50,000 list articles and concluded that “for B2B content, shorter lists perform better than longer.” 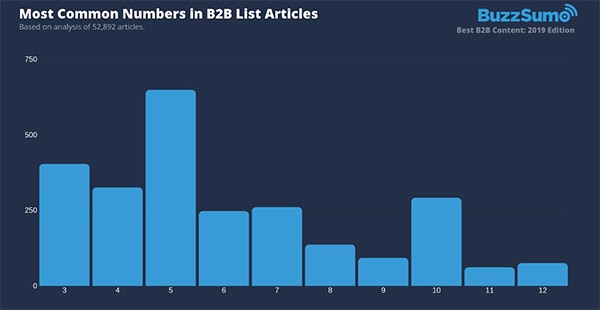 2. Stay in Your Lane

As the Thrillist article noted, time and resources can be major barriers when it comes to creating unique list content based on original research. In this regard, it might help to stick with topics you know best. Rely on your internal expertise when building these lists as much as possible, while adding in enough outside context for credibility.

For example, one series of posts that has performed really well on our blog is top books for marketers. We don’t need to run around researching these collections online too much because we have so many knowledge-hungry marketers on staff who’ve read a bunch of them, and formed genuine opinions that are likely to align with our audience. (But we’ll also check Amazon ratings and such to make sure we have a decent case.)

3. Add Your Own Twist

Listicles are everywhere. How can you make yours stand out? Think about ways you can spice up and differentiate your concepts. Knowing that audiences feed off the element of surprise, a counterintuitive angle might be just the ticket.

We attempted this here on the LMS blog recently. When Valentine’s Day rolled around, we initially planned a “What marketers love about their jobs” article. But then we thought, that kind of thing has already been done before. So instead, we assembled a list of GIFs that reflect the most heartbreaking parts of the profession.

Anatomy of a High-Performing (and High-Quality) Listicle

Looking for some inspiration to guide you toward listicle greatness? I recommend checking out the this post from our friends at LinkedIn Talent Solutions: 5 Clever Interview Questions to Uncover Candidates' Hidden Strengths.

It was called out by BuzzSumo as one of the top-performing B2B list articles of 2018, accumulating more than 12,000 shares. As you go through it, you’ll see all of the above traits on display. The list is short but sweet, covering a topic of direct expertise for LTS, and adds a fun twist by going beyond the standard “best interview questions” convention.

It also includes some of those calling-card staples of clickable and shareable content, like GIFs and pop culture allusions (Batman is in the feature image). 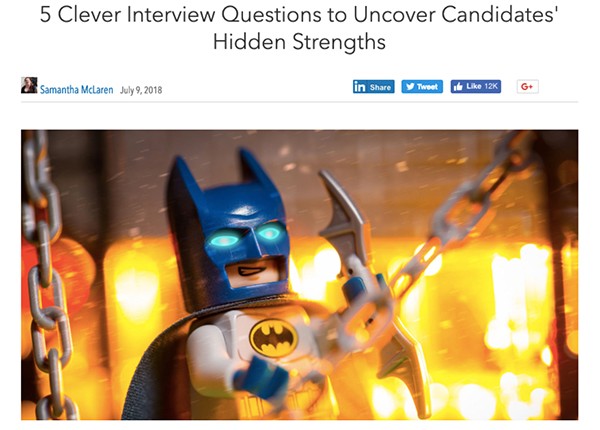 So, this is my plea to content marketers: let’s restore the diminished prestige of listicles. Let’s make them something our audience can click on with confidence and anticipation, rather than reflections of the worst in clickbait gimmickry.

For more thoughtful coverage of B2B content, and the occasional high quality listicle, subscribe to the LinkedIn Marketing Blog.