When a Cannes Lions International Festival of Creativity session is titled “Cracking the Code of Creativity,” you’re skeptical at best, right? Isn’t creativity unquantifiable and undefined?

But scroll down and you see the speaker Daniel Bonner, Global Chief Creative Officer at Razorfish and Will Sansom, Director of Contagious Insider at Contagious Communications. Curiosity officially piqued. If there’s any chance of cracking the code on creativity, it’s going to be the combined forces of one of the most creative agencies on the planet and the intelligence platform that helps brands achieve the top 1 percent of creative ideas.

Bonner and Sansom ask the audience, what do we really know about creativity? Fair question. We know creativity is often imaginative and bold. But it is often a subtle version of reality. What does that really tell us how creativity is achieved? 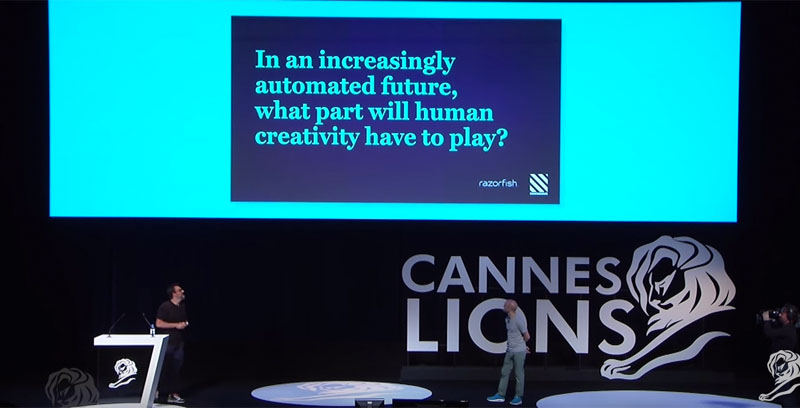 Razorfish and Contagious embarked on an experiment channeling the one thing that challenges creativity — data science. Can data science really help us to understand creativity?

The two were allowed to dive into the Cannes Lions archive and write their own API to extract over 100 million lines of meta data from over 15 years of submissions. That’s 400,000 submissions from 40,000 agencies in 123 countries. And to magnify the scope of this experiment, they pulled even micro data such as words, names, titles, categories — literally billions of data points to analyze. With an algorithmic army, the hope was to identify patterns, trends and ultimately meaning behind what makes amazing creative work.

What better way to get a better understanding of creativity than to look at the winners of Lions. After all, only 4 percent of submissions receive a Lion —  an extremely high standard of creativity. With that said, they looked at the data under the lens of a metric they called win-rate, aka the percentage of submissions that actually result in said accolade.

Here’s just a peek at some of data they unveiled around cost, relationships and teams as it corresponds to winning submissions. So here are the creative principles proven by data science:

Takeaway: “It doesn’t matter about budget, location, company or client -- great creativity is within reach of us all.”

Takeaway: “Great creativity may not cost money, but it does require an investment of time, bravery and trust.”

Takeaway: “Creativity is a reflection of company culture — make yours open, inclusive and free from ego.”

Play Nicely with Others

Takeaway: “Modern creativity demands collaboration — internally and externally — so make sure you know your strengths.”

Takeaway: “Crunch your data to discover the important truths.”

With these principles in hand you’re empowered to embark on your own journey to creative excellence. But if you’re a Veronica from New Zealand you’re chances at retrieving your very own Lion just skyrocketed. To be on the inside on that inside joke of Bonner’s and Sansom’s and to see all the data for yourself, check out the recording of Cracking the code of creativity.