How to Deliver Great Creative on Social Media

LinkedIn’s CEO Jeff Weiner took to the Debussy stage at Cannes Lions this week, with a high-profile panel focused on getting to the bottom of what makes for great creativity on social media – and where such creativity could be going next.

Elyssa Gray, Director, Head of Creative and Media at Citi, and Bob Lord, Global CEO of Razorfish, both worked closely with LinkedIn on the development of Citi’s Connect: Professional Women’s Network, which boasts the highest per capita engagement of any LinkedIn Group.  Weiner described the close relationships formed by members of this group as “networks on top of our network” and moderator Stacy Martinet, CMO of Mashable, saw the collaboration between client, agency and platform that led to the Connect concept, as evidence of what true social media creativity is all about. 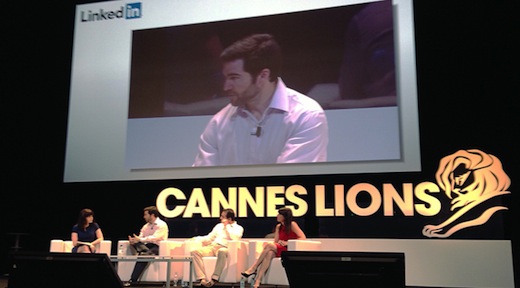 All agreed that the creative process today has to be iterative and that active collaboration between technologists and creative departments is essential for success. The courage to experiment and be prepared to launch concepts, then react to data and quickly back effective initiatives was seen as particularly important. Elyssa Gray talked of the evolution within Citi’s culture that enables her team to “put things out there, see if they take off, and be nimble enough to react,” and of a “200 year-old bank taking intelligent risks.”

What brands put out there has been the hottest topic of conversation at this year’s Cannes Lions, with “content” the undisputed buzzword of the festival. As Jeff Weiner explained, LinkedIn itself aspires to be the definitive professional publishing platform. Innovations like Sponsored Updates (currently in limited release) mean companies can reach LinkedIn’s 225 million members, right in the LinkedIn feed, no matter what device they’re using – desktop, mobile or tablet. This, plus Influencers and personalized trade publication LinkedIn Today increasingly puts the world’s largest professional network at the center of content marketing.

The panel spoke about broadening perceptions around the form factors that value adding content can take. Bob Lord referred to companies being able to tap huge repositories of content, whose existence and value might be unsuspected, but which provide evidence of their culture and values. Jeff Weiner pointed out that many of LinkedIn’s most popular updates involve companies sharing content not directly related to them – but which show their priorities as brands and businesses.

All agreed relevance is vital – and that the ability to use data effectively to deliver that relevance is one of the hallmarks of successful social media creativity. “Any ability to create relevance comes from the ability to mine the data – and to iterate and improve from that,” said Weiner. “That ability is now more important than ever.”

The Connect story provides a clear view of what the results of such relevance can be, with the LinkedIn group connecting members to a rich source of high-quality content and conversation developed in partnership with Citi’s Women & Co. As Citi’s Elyssa Gray explained, the group’s members are not passive observers: “these women get actively involved in conversations because the subjects that are being discussed are close to their hearts; they genuinely matter to them.”

While the initiative has “exponentially” driven brand uplift, Gray stressed that it was not just about telling the company’s story: “It’s also about being respectful of professional women and their stories. Listening to them and then providing content to help them with their professional lives.”

The power of content – and of social media creativity more generally – comes from its potential to change lives at the click of a share button. Jeff Weiner summed-up with an example of how his colleague, Mike Gamson, SVP Global Solutions at LinkedIn, shared a finance brand’s Sponsored Update about helping parents manage retirement that had personally resonated with him. He heard back from a friend boarding a flight back to the US who explained that he would be sharing this with his parents as soon as he touched down, and thanked him for helping to start a conversation on a very sensitive topic. Authentic, relevant and therefore hugely resonant – it was just one simple example of the power of social media creativity.

Editor’s Note: This blog post is syndicated from our EMEA Marketing Solutions blog.