Introducing the B2B Beat: How B2B Publishers Are Adapting to the Rise of Content Marketing 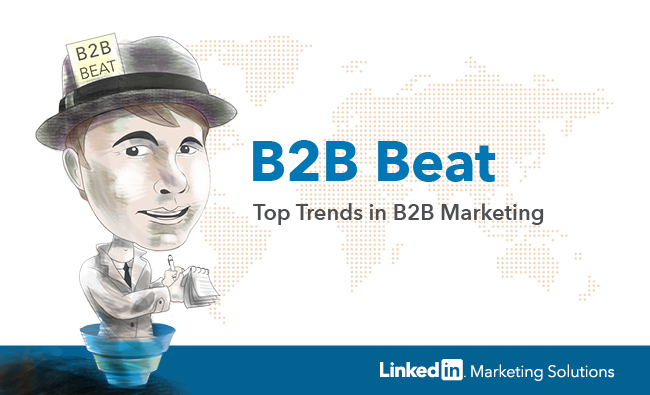 Welcome to B2B Beat, a new weekly series in which our resident B2B expert, Sean Callahan takes a close look at the most important trends and issues facing B2B marketers today.

A little bit about Sean, Senior Content Marketing Manager at LinkedIn (in his own words): I’ve spent most of my career in the B2B world, working for B2B advertising agencies beginning in the 1980s and as a reporter for BtoB magazine starting in 1998. I joined B2B ad technology company Bizo in 2012, and, after Bizo’s acquisition by LinkedIn last year, I was thrilled to become a part of the LinkedIn Marketing Solutions content team.

For our first B2B Beat story, we’re examining some trends in B2B publishing, an industry that has struggled in the past decade. Three waves of value destruction have battered the business publication business model, which had rarely faced competition. The first wave of value destruction was Internet advertising. The second wave was search. And now the third wave is social media and content marketing. All three of these digital marketing avenues pose competitive threats to trade publication in reaching business audiences.

Since about 2005, B2B print pages have been in a steady and sometimes precipitous decline, according to American Business Media data. Last year was no exception. Preliminary estimates from ABM indicate that spending on print ad pages declined about 3 percent between 2013 and 2014.

On the other hand, overall spending on B2B marketing – which includes print plus events, digital, and data – increased about 3 percent last year. By moving beyond print and embracing their heritage as content creators and database purveyors, B2B media companies have discovered new ways to thrive. “We’re seeing a lot of publishers moving into marketing services,” said Reed Phillips, Co-Founder of media investment bank, DeSilva & Phillips. “That’s a logical extension of their business.” Several moves by a cross-section of B2B media companies offer a window into the various ways these B2B publishing companies are reinventing themselves – and how closely they are beginning to resemble B2B marketers.

4 B2B Companies Reinventing Themselves in the Age of Content Marketing

Haymarket Media Group, publisher of titles ranging from The Clinical Advisor to PRWeek, announced on March 3 that is had acquired Group DCA, a digital marketing agency specializing in healthcare. The move is designed to help Haymarket provide its healthcare industry advertisers with marketing solutions. Lee Maniscalco, CEO of Haymarket Media, told Medical Marketing & Media magazine, “This is a pivotal time in professional media, as we continue to transform our medical communications company from a legacy print publisher to a medical digital communications firm.”

Last month, Arrow Electronics, an electronics distributor, announced it had acquired United Technical Publishing from Hearst Business Media. For Arrow, the move expanded its content marketing capabilities. Matt Anderson, Chief Digital Officer at Arrow, said the deal will boost his company’s ability to provide the content its customers crave. “We are providing the global electronics components community a comprehensive set of offerings to meet their strategic information needs,” he said.

PMMI is a packaging industry association, which produces the Pack Expo trade shows. PMMI acquired Summit Media Group, which publishes Packaging World magazine, last year. In February, the association announced the launch of PMMI Media Group, which integrated Summit’s editorial content with PMMI. “Having content 365 days a year was one of our key goals,” Katie Bergmann, Senior VP at PMMI, said of PMMI’s intention when acquiring Summit. She said the association had considered building its own editorial team, but eventually viewed acquiring Summit as the better option. This deal was ultimately about expanding PMMI’s engagement with both its trade show attendees and its exhibitors beyond the few days a year when the event is in full swing.

Two years ago, CFE Media, which publishes Plant Engineering and other titles, launched a software called ContentStream. The software enables marketers to pluck articles from CFE Media’s archives to use on their own websites to provide content valuable for engineers. For Steve Rourke, Co-founder of CFE Media, the success of the software shows that the goals of B2B marketers and the business press are so closely aligned. “We’ve always been great at creating content and building databases,” Rourke said.

B2B Career Move of the Week:

B2B Resource of the Week:

In this Forbes column, “Thought Leadership Speakers You Don’t Want to Miss in 2015,” Influencer & Co. CEO John Hall lists his top thought leaders on, well, thought leadership. This list is a starter kit for marketers who are looking for a group of virtual mentors to boost their own company’s thought leadership efforts.

Want more industry news & insider tips? Keep your finger on the pulse of B2B Beat by subscribing to the Marketing Solutions Blog: