This week I attended LinkedIn’s Future of B2B Trends event where an intimate crowd of 30 were exposed to seven trends ripe for marketers. Sounds like a pretty standard Thought Leadership event, right? Nope.

First of all, the event was held at Momofuku Ssäm Bar in Manhattan. But get this. James Beard award nominee chef Matthew Rudofker created a divine course inspired by each trend. Unlike many B2B events, this one was made for the senses.

Here are three highlights among the seven trends you can apply to your marketing and perhaps to dinner tonight, too.

The Economic Case for Cost Per Connection

Throw out your superficial KPIs like CTR (click-through-rate), CPC (cost-per-click) and even CPL (cost-per-lead). If you’re not measuring lead quality, those metrics don’t actually correlate with purchase intent. Instead, think of Cost-per-Connection as a leading indicator of ROI. Good businesses drive relationships and marketing has a huge hand in driving this metric.

For example, if a salesperson sends a LinkedIn InMail to a prospect, she might get a 16% response rate. But if that prospect is exposed to thought leadership or to content marketing, there is a 150% lift, and the response rate jumps to 40% -- about 14 times higher than the kind of response rates you see in email.

LinkedIn customers have found that when their sales force is more connected to their actual prospects they get more revenue. They’re seeing a direct correlation between connectivity and actual revenue, and our biggest clients are using our data to track this regularly. 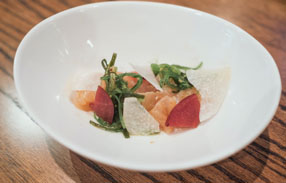 One of his most important vendors is his fishmonger, Louis Rozzo. Because Rudofker has nurtured that relationship, he’s able to maintain the highest quality of seafood on his menus for Momofuku. Rudofker brought this to life in a Fluke: yuzo kosho, umezuke, wakame. It was the freshest seafood delight I’ve experienced in some time.

Often brands are told their content machine should be modeled after the newsroom model — with armies of brand journalists creating real time, light weight content at hyperspeed. With this as the model, it’s no wonder one of the primary concerns marketers have is the feeling of not having enough content. I don’t know any brand that has the staff to support a newsroom model.

First, it’s all about focus. Disney is not spending $10,000 on a hundred different movies, hoping one works. The company recently had four movies bring in $6billion in revenue. Disney is making giant bets on fewer and fewer movies. The company is creating fewer pieces — but doing it better. For a brand, it’s hard to me known for anything. Instead, focus your efforts -- be known for one thing and really own it.

The next aspect is familiarity. Among those four movies — one of which was the latest Star Wars picture — that generated $6 billion, none of them were wholly original; they were either remakes or sequels or spin-offs. Disney, like many other Hollywood conglomerates, is doubling down on the content in their backlog that’s been successful, the content their audience already trusts.

The last aspect is extensibility. When I say Disney is doubling down on familiar asset, it’s not just about more remakes or spinoffs. They’re repackaging those narratives in new creative ways. For example, Star Wars is not just a movie. It’s also a video game,action figures, a lunch box, a Halloween costume. By repurposing the stories beyond their original format, Disney is not only extending their relevance,they’re extending their reach, too. 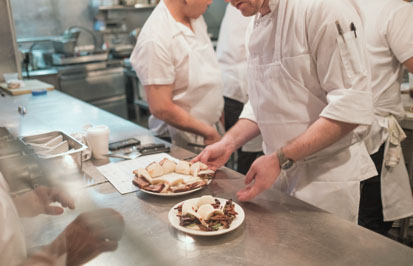 Rudofker mimics these three concepts with a family style plate of the most amazing pork buns I’ve ever tasted. The dish is focused, because it’s core to Momofuku’s cuisine. it’s what they’re known for -- they’re not trying to have a perspective on Spaghetti Bolognese. It’s familiar in the sense that it’s a take on a classic.

The Growing Need for Touchpoint Consistency

Touchpoint consistency, or shall I say lack thereof, is one of my biggest pet peeves as a marketer. And it’s been heightened of late due to the fact that one the unfortunate side effects of the content explosion is brand inconsistency.

Why is brand consistency important? Just 30 years ago, we as consumers were exposed to about 500 ads a day. Multiply that by 10, and today we see 5,000 ads. With the saturation of marketing messages, no one remembers anything anymore. In a recent study, 14% of internet users remembered the last ad they saw, only 8% recall the company or the product promoted, and less that 3% thought the ad was relevant (which is a whole other problem).

Turns out there’s a solution, however. It’s called repetition or pattern recognition. It’s about showing someone the same thing over and over until they remember it. When it comes to B2B brands, Content Franchises are the best conduit for maintaining consistency. Within your franchise, you’ll have SlideShares, blog posts, sponsored content, and social posts around a focus theme, and there should be a consistent visual identity and tone.

And think beyond your marketing. Do the sales decks have a similar identity and tone to your marketing? What about your product? Your events? Consistency goes beyond content and really shapes the customer experience, which is its own blog post on its own. 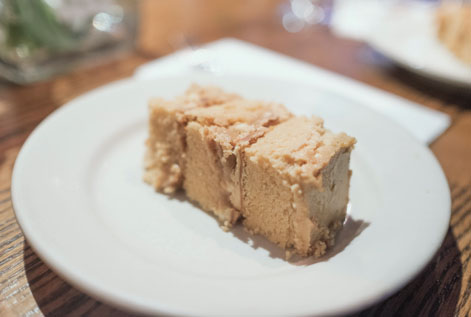 When you’re consistent, you’ll be remembered. And with that, you’ll be top of mind for your audience That’s a goal for all marketers but also a common one for restaurants. Rudofker presented dessert by Milk Bar as his metaphor for Touch Point Consistency. The touch point being their naked cakes -- playful but most importantly differentiated.

Once I was home and in my stretch pants, a necessary wardrobe change after seven courses, I realized how interconnected these trends were. It all returns to mastering the content franchise. We know connections are important, but how do we nurture them so that they evolve beyond the connection and into a meaningful relationship? The answer is your content franchise. As marketers we recognize brand consistency in B2C all the time. Think Coca-Cola or McDonalds. But how do we create that same level of consistency in B2B? The answer is your content franchise.