11 Tips to Rock Your Next Virtual Meeting

Around the year 2000, back when cell phones were just starting to become mainstream, the technology still needed its users to cut it some slack. Dropped calls, spotty coverage, missing every third word – these were part of the experience. (“Can you hear me now?!”)

One reason these bugs weren’t as big of a deal back then is because most cell phone users still had a landline to fall back on. But as mobile phone technology improved and the novelty wore off, people gradually abandoned their landlines and became less accepting of glitches.

It appears we’ve sped to a similar point with virtual meetings. For years, these online meet-ups have been cause to expect more awkwardness and less productivity. But now, with physical distancing restrictions, our in-person landline has been temporarily disconnected and the novelty of a virtual meeting has suddenly vanished. As such, expectations have quickly risen. We must all become virtual meeting rockstars.

“Virtual meetings are a fact of life for remote teams, and they can be successful and productive, if we know what to do,” says Kevin Eikenberry, author of The Long-Distance Leader and instructor of the Leading Virtual Meetings course on LinkedIn Learning (now available at no cost). Whether you’re virtually attending meetings, running the show, or both, here are 12 ways to bring real value to your next virtual meeting.

Use the following advice to stand out (in a good way) when attending your upcoming virtual meetings.

With virtual meetings, your on-camera likeness and background become part of your professional brand, so think like a photographer and frame your shot. Make sure your face is well-lit and the scene behind you doesn’t distract people from hearing what you’re saying. Understandably, not everyone has a home office or an ideal backdrop, but virtual backgrounds can help with this – here are a bunch you can upload in Zoom.

You’ll want to sound good, too, so be sure to check your microphone. If your home office space has an echo, consider adding softer features, like a thick rug or a lush window treatment. Also, get in the habit of defaulting to mute when you’re not speaking (and taking it off mute when you are).

Avoid Dialing In from Your Phone If You Can

A shaking background is a distracting background, and it’s almost impossible to hold a phone steady for any length of time. Granted, there are stands for that, but if it’s a work meeting, it’s generally advised to dial in from a laptop or desktop computer.

A bigger screen also makes it easier to see the full gallery view (as opposed to a single-person view), which is good for picking up on visual cues from other participants.

Take advantage of the “raise hand” feature if your meeting technology has it. After all, you’re much more likely to have the stage to yourself if the presenter calls upon you. Plus, trying to time your interjection at just the right moment can wrack one’s nerves. When you raise your hand, you don’t have to worry about talking over someone.

Have you ever been part of an in-person meeting where you had to address people’s multitasking during the last meeting? Multitasking doesn’t just distract you from listening intently to your teammates, it can come off as disrespectful.

True, sometimes it’s unavoidable, like when a customer needs an answer now. But going into any meeting with expectations of getting non-meeting work done is more uber distracting than uber productive. Your peers are counting on you to be present. That said, these are strange times, and people have a lot on their plate, so show compassion for others when their kids interrupt or they’re forced to take care of an urgent home matter.

Set Your Webcam at Eye-Level

Giving your peers a dog’s-eye-view of your nostrils isn’t recommended. Imagine a conversation where one party is kneeling – that’s the low-webcam equivalent.

If you don’t have a computer stand, keep a couple of books around and use them to prop up your computer before firing up your webcam.

It’s also important to look into your webcam when talking. To you, it might not seem that different from looking at your screen. But to the person on the other end, it feels like you’re looking them in the eyes. This simple change can go a long way toward helping you establish a more human connection when talking to someone via video.

6 Tips for Running a Virtual Meeting

Yes, it is possible to run supremely productive meetings online. The following advice will help. 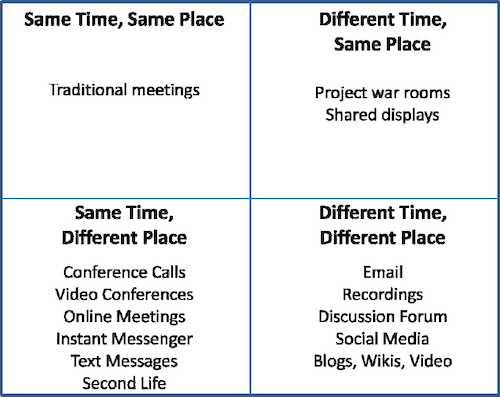 Penny recommends sharing your presentation on a different time, different place channel prior to your meeting. “Then you can use the virtual meeting to focus in on questions that people have raised and areas of interest,” she adds.

Test Technology Before Deploying It

Technical issues are going to happen from time to time. Still, starting your virtual meeting with a delay can color it with an unproductive undertone that lasts longer than you want. Luckily, there are steps you can take to minimize the chance of technical setbacks occuring.

Before going live, be sure to give whichever technology you’ll be using a trial run. Meeting applications often require you to download software, grant certain permissions, or restart your computer. Waiting around for setup to be performed is a painful experience for everyone. Even if you’ve used the technology before, if it’s been a while, a surprise update can easily lop five minutes off the front-end of your meeting. Consider blocking off fifteen minutes before important meetings to make sure everything’s working swimmingly. There will still be glitches, but they’ll be forgivable.

A common challenge with virtual meetings is people are more easily distracted. When you take away the watchful eyes, it’s simply easier for attendees to fade into their own world, reading this article or checking that social feed. The speaker’s voice all too easily becomes background noise.

It’s a good idea to make every meeting more interactive, but especially virtual meetings. The aforementioned different time, different place channels can help you achieve a more conversational setting because rather than asking attendees to sit back and listen, you’re asking them to actively discuss something everyone’s already seen. Consider providing the questions and talking points you plan to cover in advance of the meeting – people are especially eager to share thoughts they’ve had a chance to formulate. A prepared idea can be an excellent conversation stimulator.

We know that well-told stories elevate content marketing. Why shouldn’t they do the same for our meetings? The science translates: The brain activates just the same whether we’re reading a story or hearing one told during a meeting.

Think about the points you want to get across and then find a way to communicate them in story form. Attaching even a simple cause-and-effect scenario to a key point of yours can give it lasting impact.

Like stories, visuals command attention. If you’re rolling with just a speech, add a PowerPoint deck to accompany it. This doesn’t need a big to-do. A few poppy slides can do wonders when it comes to preventing eyes and brains from wandering.

Another idea, also courtesy of Penny Pullan, is to use “picture maps.” For this, you could superimpose a headshot of each attendee on an actual map, or you could create a sort of “who’s doing what,” project-management style breakdown, where attendees' photos are placed alongside their role. Either way, when you’re staring back at yourself from your computer screen, your attention is more likely to be locked in.

End with a Clear Action Plan

A meeting’s effectiveness is best measured by the actions and results it produces. As such, it’s paramount that your meeting clearly addresses what’s next. Or, who’s doing what, and when. Consider having the project manager enter tasks in real-time as this will help surface roadblocks that can be addressed as a team.

Another good way to make sure actions are likely to get done is to ask attendees to rate how likely they are to accomplish their tasks within the provided time frame. If you’re using a scale of 1 to 10, any answer less than a 10 should merit the team’s attention.

For more ideas on how marketers can work wonders in a work-from-home world, subscribe to the LinkedIn Marketing Solutions Blog.