Marketing Book Worth a Look: ‘What’s Your Problem?,’ by Steve Goldhaber

It’s a question that could elicit all sorts of different answers from practitioners, but a fairly succinct and universally agreeable one would be this: solving problems.

Content marketing itself exists as the solution to a problem (“How do we spread the word about our business and engage potential customers without relying entirely on paid advertising?”) but also works by solving problems. Nearly every piece of marketing content addresses some sort of challenge, conundrum, or sticking point for the audience; those marketers who are more advanced in their ability to understand, unpack, and guide people through these problems will forever be the most successful.

Marketing Book Worth a Look: What’s Your Problem? Become a Better B2B Marketer by Enhancing Your Problem-Solving Skills, by Steve Goldhaber 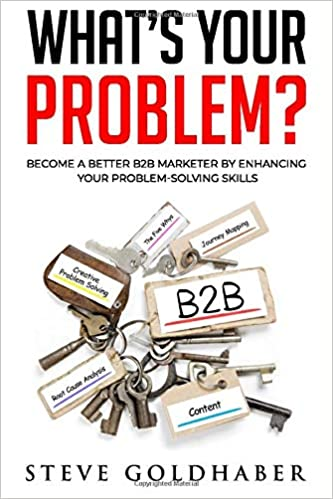 “What’s your problem?” It’s a question that tends to be associated with gruffness and impatience. But for Steve, the investigative inquiry has been a critical instrument for getting to the core of what someone truly needs or wants. At some point along the way, he started asking it in response to every seemingly baseless tactical request he’d receive from colleagues.

“This question forced people to think strategically about the problem they needed to solve,” he writes in the book’s introduction. “When I asked the question, most didn’t have an answer. Eventually, after they uncovered the answer, our conversations were more focused and productive.”

“I believed in the power of this question so much,” Steve adds, “I decided to write a book about it.”

Here’s what marketers will find within said book.

A Problem-Solving Guide for B2B Marketers

After getting past the preface, acknowledgements, and intro, Steve gets into the nitty-gritty with a methodical six-part blueprint for problem solving in a B2B marketing context:

Each part is broken up into several different short sections, exploring practical scenarios in which these principles and methodologies can be applied. Through a problem-solving lens, Steve discusses generating leads, converting prospects, onboarding new customers, improving retention, and more. He invokes recognizable theories and models such as root cause analysis, Hurson’s Productive Thinking Model, and Freytag’s Pyramid.

Many of the concepts and practices covered may not be new ground for seasoned marketers, but Steve does offer a valuable new perspective through which to view them. Here are a couple moments in What’s Your Problem? that stood out to me.

Putting a different spin on the classic five Ws of information gathering, Steve eschews the “who, what, when, where, why” formula in favor of a more repetitive version: Why? Why? Why? Why? Why?

It’s a method first developed by Taiichi Ohno of Toyota Motor Company back in the 1980s, encouraging people to ask variations of the question “why” five times in order to get to the bottom of any uncertain matter. As one example from his own experience, Steve references an instance where his team launched a new rebranded website for a Fortune 500 company, resulting in a 30% drop in user satisfaction.

Using the five whys, his team worked backward to get to the root of the issue:

In the following section, he explains how root cause analysis, which “breaks down a problem into its various parts, so that all the contributing factors to a problem can be understood.” It’s all about being more systematic and thoughtful about diagnosing what needs to be fixed, as opposed to working off hasty assumptions or conventional thinking (i.e., the reactive answer to the first “why” in the example above).

In the Content Planning portion of the book, Steve frames his discussion around narrative structures and storytelling. I love this angle for two reasons:

First, it’s conducive to treating customers as the protagonist at the center of a hero’s journey. Second, narrative formats are fundamentally about problem-solving. Almost every good story involves a problem that arose and was solved. Steve illustrates this through several different storytelling devices and paradigms: Freytag’s Pyramid, the Golden Circle, the V Formula, the Story Spine (aka the Pixar formula).

It all drives home a crucial point: You are not the hero in your customer’s story: “You’re the sword that your customer uses.”

One thing I really love about What’s Your Problem? is how fast-flowing and digestible it is. Although Steve covers a ton of ground, with 26 subsections in all, each one is succinct, never spanning more than a handful of pages.

Any marketer out there can find value in these pages, so if you’re in need of an enlightening, brisk read to help you get back in touch with the true purpose of what you do, that’s a good problem to have

Stay up on the latest essential reads for marketers by subscribing to the LinkedIn Marketing Blog.