U.S. HNWIs Worth Record $15.2 trillion, but How Much Is in Play for Robos?

For over 20 years (see earlier blog post), Capgemini has been tracking the growth of High Net Worth Individuals (HNWIs) across the globe with their World Wealth Report. Today, Capgemini released their 2nd Annual U.S. Wealth Report which identifies the U.S. metro areas with the highest HNWI population and assesses the impact automated advisory services (aka robo-advisors) is having on the U.S. Wealth Management industry.  Read on for highlights of this year’s research.

There is record HNWI Wealth in the U.S. with over $1 Trillion Added in 2014

As much as the buzz has been on emerging markets of China and India, Capgemini has found that the U.S. quietly saw over $1 trillion added to U.S. High New Worth Individual (HNWIs) wealth in 2014 to reach a total of $15.2 trillion.  The 4.4 million HNWIs in the U.S. by far still represents the largest HNWI market globally, with almost 2 million more than the second largest market of Japan.  In fact, 28% of new HNWI wealth added globally since 2008 was in the U.S.

To put it in perspective, the five largest HNWI metropolitan areas in the U.S. have wealth levels which would fall in the list of the top 10 countries globally, with New York only exceeded by the U.S., Japan, and Germany.  Los Angeles, Chicago, Washington D.C., and San Francisco all have HNWI populations larger than the 11th largest HNWI country, India. 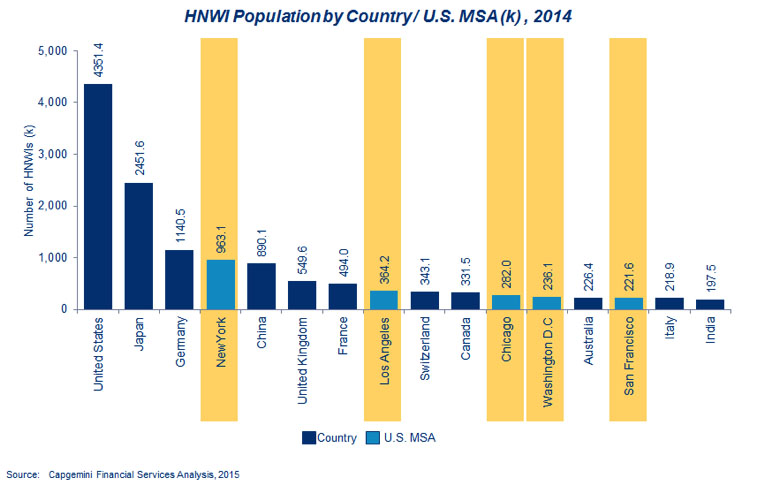 HNWIs’ growing digital demands are changing the game – 87% of U.S. HNWIs under age 40 already consider all or most of their wealth management relationship to be digital

There is clearly a large and growing HNWI market in the U.S.  However, the industry is facing a new wave of challenges, and technology is at the heart of the change.  Wealth Management has traditionally been slow to adapt to digital times.  For many years, firms held onto the conviction that Wealth Management was a face-to-face, relationship-based business.  In most ways, that remains true today.  However, the nature of the “relationship-based” business is evolving with technology advancements and demographic shifts.

The changing mindset is largely from an awakening of how important digital is to HNWIs, especially younger ones (but also older and the ultra-wealthy).  87% of HNWIs under 40 already consider most or all of their wealth management relationship to be digital.  But it goes beyond digital as 85% of younger HNWIs are likely to leave their current firm if their needs are not met.  In fact, younger HNWIs are five times as likely to work with more than five different wealth management firms (49%) than older HNWIs (9%).

These evolving HNWI expectations and increasing digital demands put incredible pressure on wealth managers. As important as digital is to HNWIs young and old, it is not a replacement for the wealth manager.  Digital is simply a tool that wealth managers can and should be leveraging to enhance their client relationships.  However, the emergence of automated advisory services (robo-advisors) is accelerating the evolution of wealth managers need to clearly define their value proposition.

Use of automated advisory services (or robo-advisors) is on the rise with U.S. HNWIs noting a willingness to invest an estimated $1.5tn by 2017

There has been a lot of hype around automated advisors.  AUM from the top U.S. automated advisors increased over 250% from March 2014 through September 2015.  None-the-less, the overall size to-date is rather insignificant with the top U.S. independent firms holding only about $8bn in assets (compared to $15.2tn total U.S. HNWI wealth).

It’s not today’s size which is most worrying, it is the potential for disruption.  34% of U.S. HNWIs would consider using automated advisors.  For HNWIs under 30, this rises to 87%.  U.S. HNWIs noted a willingness to allocate an estimated US$1.5 trillion of assets to automated advisors by 2017 (US$4.2 trillion when including mass affluent).  Of course that doesn’t mean they are actually all going to abandon their Wealth Managers. 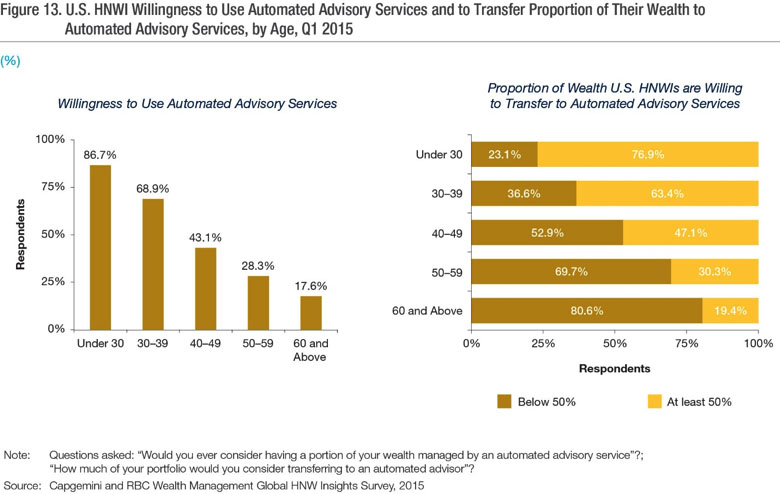 While robo-advisors have made inroads, they are still early in their maturity levels offering a very limited set of services.  High client demand and growing competition from non-traditional players has many wealth management firms making it a high priority to develop their own strategies for automated advice.  Traditional firms (and new ones) have a huge opportunity to claim a sizeable share of this market, but with these opportunities also come challenges. 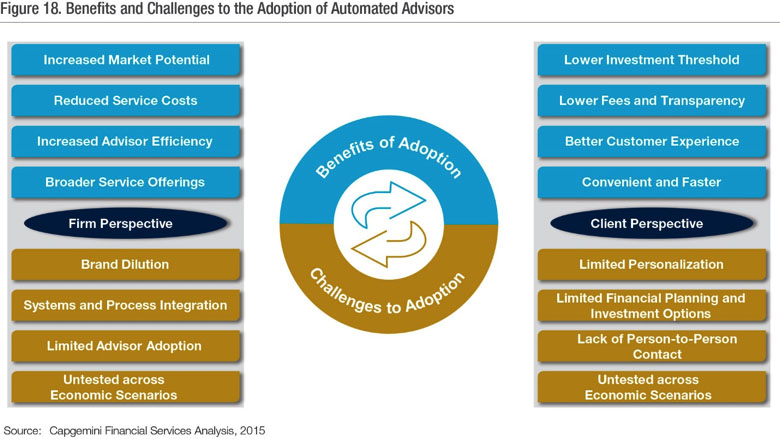 The advance of automated advisors is inevitable.  Automated advisory services offer great potential to help firms meet HNWIs’ demand for low cost and digital services.  With vendor consolidation expected, firms must choose their path:  build/acquire capabilities or partner with existing firms.  However, they need to move quickly as providing this capability to HNWI and mass affluent clients will quickly become table stakes for firms and the real value proposition of a wealth manager will be on holistic wealth advice.

You can download the full report and further investigate the findings from the U.S. Wealth Report 2015 at www.us-wealthreport.com or follow Bill Sullivan, @wfsullivan3, on Twitter using #USWR2015.