“Have you heard of Delta 4?” Kunal Shah asked the audience at LinkedIn's TECH Connect event in Bangalore, India, last week.

“It’s a space shuttle,” a brave voice pitched-in from the back of the packed auditorium.

“It’s a plane route,” suggested another.

Of course they were both right, but they weren’t the answers Kunal was looking for. He was attending LinkedIn’s tech convention to talk about his own theory that accurately predicts whether a start-up is going to be successful or not.

He explained it by asking the 200-strong crowd to suggest things that are less efficient now than they were 10 years ago.

“Indian traffic,” quipped one of us.

“That’s a symptom of population explosion, and cheaper vehicles, due to efficiencies in healthcare and engineering,” Kunal calmly replied.

“Conversation?” someone else shouted.

“Have you heard of WhatsApp!” came the smiling retort.

Seeing that we were struggling Kunal went on to explain that humans are the only animal on the planet that have hacked evolution. While lions wait for evolution to make them better hunters, humans use technology to make Darwinian improvements at the most incredible speed (comparatively). Which is why it’s hard to think of things today that were more efficient a decade ago.

What’s evolution got to do with start-ups?

Well successful start-ups work in a similar way. They make our lives drastically more efficient to a point that we don’t consider going back to the previous status quo. Take Uber, for example. Compare your experience of getting a taxi today with a time before ride sharing apps became part of your daily commute. You’d probably give standing on the side of the road in all weather conditions about three out of 10, while Uber might be a seven or eight out of 10. No one wants to go back to the unpredictability of hailing a cab.

The difference between these two experiences Kunal calls Delta 4 or Δ4. When the new experience is 4 points better than the one it is replacing, it’s very likely the start-up is going to be a hit.

“If the delta improvement score is greater than four, we won’t go back,” Kunal said.

So why am I writing about start-ups on the Linkedin Marketing blog?

Due to the exorbitant amount of data marketers track and record daily, we find ourselves backslapping for 0.01 percentage of improvements in programmatic campaigns or cheering one per cent increase in open rates. But Kunal got me thinking that perhaps we should be focusing on the bigger efficiencies, the delta 4 changes that will help to make our members and customers’ lives better.

I only heard Kunal’s theory, because he was speaking a LinkedIn event that focused on the alignment of sales and marketing. So is “smarketing” the Delta 4 of marketing?

Smarketing is the convergence of sales and marketing teams.

This could mean simply increasing communication between to the two departments to ensure they are working together on common business objectives. Its most extreme adoption is a radical reorganization of the company that sees marketing and sales roles combined into one function with mutual accountability.

For now, in India at least, we’re seeing smarketing most commonly manifested in the role of a Chief Revenue Officer who oversees both functions. There’s been a 75% increase in the number of LinkedIn members with a CRO title across the country.

And an aligned sales and marketing approach is producing impressive results on LinkedIn. 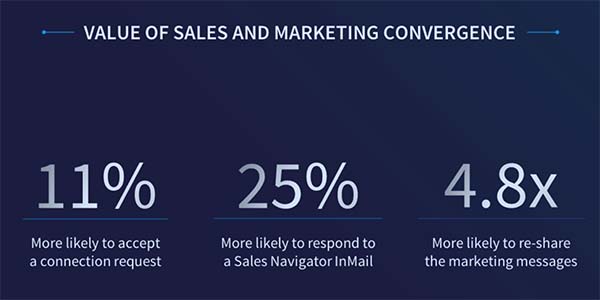 With a 25% increase in response rate and close to a five-point bump in potential reshares, smarketing is starting to look a lot more like a Delta 4 opportunity to us.

At this early stage, the magic formula for a fully integrated sales and marketing team is "work in progress," but it just needs the right CRO or a smart marketeer to hack this evolution. Then, we won’t go back either.

To discover how to ensure your sales and marketing teams are better aligned, download "The Power Couple: How Sales and Marketing Alignment Makes Your Company Unstoppable" today.