In an era of declining trust – within the political landscape, news, and overall reporting of facts – the credibility of thought leadership faces many challenges. In fact, two-thirds of countries surveyed in the recent release of Edelman’s 2017 Trust Barometer are now “distrusters.” Distrusters include those with less than 50 percent trust in mainstream institutions of business, government, media and NGOs — down from just over half in 2016.

Today B2B marketing paints a picture of equal uncertainty, although marketing thought leadership is generally perceived as an effective way to foster awareness with customers. However, the ROI of thought leadership has long been hard to evaluate. With complex sales cycles, multiple deal influencers and siloed measurement complicating attribution, we are heavily focused on channels rather than the psychological and emotional drivers of purchase behaviors.

Seeking to aid B2B leaders navigate this challenge, Edelman and LinkedIn surveyed 1,300 business decision makers (BDMs) and C-suite executives (CXOs) on how thought leadership influences their own purchase behavior. The results might surprise you.

What we discovered is that thought leadership has tremendous impact with customers and prospects — more than its creators believe.

Here are some of our key reveals:

9 in 10 business decision makers (BDMs), including almost an equal number of CXOs, believe that it’s important, very important or mission critical that organizations produce thought leadership. We found approximately 50% of business decision makers and C-suite-ers are spending an hour or more a week consuming thought leadership – often prompting them to share contact information or reach out.

63% of BDMs told us “Reading [a company’s] thought leadership is one of the best ways to get a sense of the type and caliber of thinking an organization is likely to deliver.” Often, it’s one of the top ways decision makers are vetting you before taking a step further.

A majority of thought leadership producers said it enhances their brand reputation (59%). But in the eyes of BDMs and the C-Suite, they’re selling themselves short—88% and 89% respectively said the same.

In fact, it is more than twice as effective at winning business, with 20% of creators citing it helped vs. 45% of BDMs. 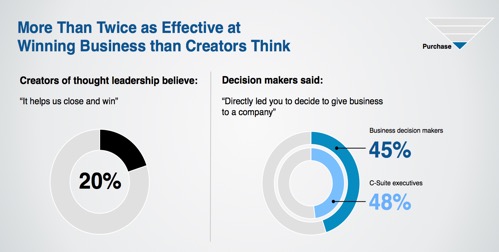 Thought Leadership is Much Stronger at Building Trust with Customers than Creators Believe.

A large majority – 82% of BDMs — say thought leadership increased their trust in an organization, even though only 49% of creators say the same.

Poor Thought Leadership Can Also Decrease the Respect and Admiration of Potential Buyers.

So what’s the biggest takeaway? Thought leadership works – but it could be working harder.

Nearly 1 in 2 respondents have been disappointed by thought leadership, so keep the following in mind to ensure your efforts are delivering what your audience needs.

Referral and relevance matter most. That means employee advocacy, utilizing influencers and developing a rock solid follower network are critical to garnering trust.

Keep me current, give me facts and insights. Is your idea of “thought leadership” too product-focused or company-centric? Re-evaluate to ensure your approach aligns to your buyers, with the knowledge that:

The reality is, creators of thought leadership are underestimating its actual impact on demand generation and revenue – including extending further into the purchase journey, playing a role in influencing RFP and revenue wins and even the ability to command a premium. Explore the greatest areas of opportunity and dive into more of the findings by downloading the full report, The Impact of Thought Leadership on Demand Generation.