The boys of summer are back.

So too are the fans, eager to discover how the story of their favorite ball club will unfold. And when it comes to telling the story of each ballgame, nobody does it like legendary Los Angeles Dodgers broadcaster Vin Scully. 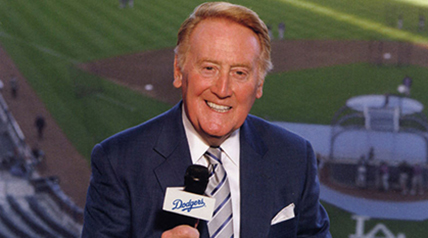 It seems every fan admires the way Scully calls a game. Even arch-rival San Francisco Giants fans tune into the enemy broadcast to hear his voice. Scully is a true ambassador for the sport of baseball, narrating the “soundtrack of summer” for Dodgers fans and all other admirers who tune in.

As a content marketer, your task is similar to Scully’s in that you need to convey the story of the home team (your company), while also keeping the fans (your audience) in tune with the rest of the league (your industry).

To help you get more fans of your industry engaged with the home team, here are three ways you can follow Scully's lead and provide your audience with the content marketing "highlight reel" of your industry.

1. Use preparation and the past to bring the present tense to life.

Perhaps there’s no better example of Scully’s devout preparation habits coming together with his appreciation for baseball’s past than the following example:

In 2007, when infielder Chin-lung Hu made it to the big leagues with the Dodgers, Scully waited patiently for the rookie to reach base, specifically, first base. And once Hu finally did, Scully announced over the airwaves, "OK everybody…All together...Hu's on first."

The current events of your industry – and your company, for that matter – do not occur in a vacuum. They’re intermingled with lessons from the past and prognostications of the future. And the best part is it’s all there for the taking, just waiting for someone like you to come along and weave it together into a story all fans of your industry – no matter which team they play for – can appreciate.

Don’t have a clue what that story might be?

That’s fine. If you did, you’d be working on it now. One tip is to combine a personally-curated archive of reports, statistics, stories and analogies with your content and event calendars. Ideating with friends like these can lead to catching lightning in a bottle consistently with your content marketing.

2. Always remember: your audience isn’t where you are.
It’s on you to connect your audience to the action. Scully takes it upon himself to make fans feel like they’ve got a seat next to him at the game. The back stories, the sights, the sounds, the smells – all the action on the field and in the stands is conveyed in vivid detail.

But the truth is, adding your own narrative and dramatizing your content is what often makes it worthy – it’s that whole chicken and egg thing. If you’re hesitant to throw yourself into the mix, you can always infuse personality by telling the story from your brand persona’s point of view.

What Scully does better than anyone else is he walks that fine line of delivering the sensational while being careful not to sensationalize. And sometimes, the events call for a theatrical performance – like when Ramon Martinez pitched a no-hitter in 1995.

“And now it has arrived. The sweet, precious moment in a ballgame that has seen one man almost against the world. And that man is Ramon Martinez. He is one out away from a no-hitter.”

3. Show everyone why you’re best to tell this story.

Back in the late ‘40s, Scully’s goal was to broadcast ballgames to the masses. If he wouldn’t have aspired to be a national broadcaster, only a handful of friends would have known him as the ‘best guy to catch a game with.’ He wouldn’t have cemented his baseball legacy, bringing us the stories of Jackie Robinson… and Kurt Gibson… and Clayton Kershaw.

Now this is true of all wannabe broadcasters but it bears telling because to break through in content marketing, you have to want it. You can’t expect your audience to seek out the URL of your company blog. You have to bring the action to them, which is why more marketers are reaching their professional audience with content marketing on LinkedIn.

Don’t be the best content marketer no one knows about. Use storytellers like Vin Scully as inspiration to hone your craft. Then break out by bringing your content to the masses that matter.