Master the Labors of Sales and become a stronger salesperson with this LinkedIn sales tactics guide inspired by the mythological hero Hercules. 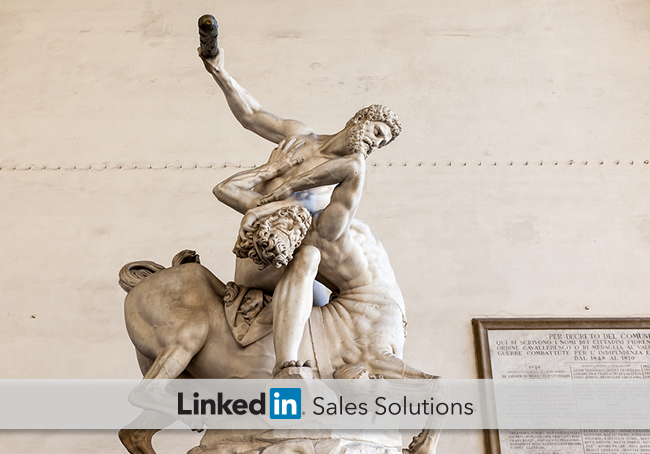 Last week, the live-action Hercules film debuted worldwide in theaters, modernizing the mythological tale and reintroducing the world to the hero’s godlike abilities. In the original Hercules legend, the hero mastered twelve labors that were thought impossible for man as penance for past crimes. Hercules’ tale has been recounted for centuries, representing complete triumph over the most challenging situations.

Still, Hercules probably wouldn’t be able to manage a sales portfolio without a little help.

Today, sales reps are constantly battling their own labors. Let’s take lessons from Hercules when aligning our sales tactics.

Here are a few of the Twelve Labors of Hercules, and how each labor can be tied to your sales strategy.

Slaying the Nemean Lion: Breaking the Armor of Ambivalence

Hercules’ first labor was to somehow slay the Nemean lion, whose fur was impenetrable. After trying to attack the lion directly with arrows, Hercules eventually succeeded by sneaking up on the beast and defeating it with his own hands. Where other heroes had fallen to the lion, Hercules was able to use his resources to defeat it.

It all depends on how much interest your prospect displays before the sale. If they are unsure about your solutions, the process becomes much more challenging. You’ll need to break that armor of ambivalence by finding a new direction to peak their interest and attack their concerns.

When you’re looking to engage a prospect, keep these thoughts in mind:

One of the most well-known of Hercules’ labors, this one saw him fight the nine-headed Hydra whose heads grew back once removed. Despite this, Hercules and his nephew used a firebrand to stop the Hydra’s heads from re-growing. The tale is often told to symbolize the triumph over hopelessness.

Managing multiple prospect communications at once can be challenging, especially if there is no automated system to organize and sort your leads. Closing one sale can open up several new connections, but you need to be prepared to act.

Luckily, you don’t need to do everything yourself – try utilizing these tools within Sales Navigator:

Capture the Golden Hind of Artemis: Managing the Speed of Social Selling

Each of Hercules’ labors becomes increasingly difficult – after slaying the Lion and the Hydra, he is now tasked to capture the speedy deer of the goddess Artemis. Hercules chased the deer for over a year, eventually capturing it with a trap net while the deer slept.

Managing the instantaneous nature of social based selling can seem like an endless chase, but there are ways to make the most of your time.

The greatest tip for any social seller is to organize for sustainable success:

The Erymanthian Boar was a towering figure, living on a mountain and attacking everything in its path. It was a long-standing plight for heroes to defeat, but Hercules was able to make quick work of the large animal.

After chasing the boar around the mountain, he drove it into deep snow and trapped it in a net. Fighting in snow was exhausting for the boar, as it quickly drained the beast’s energy.

There are still some towering, long-standing practices in sales that need to be moved out of their natural habitat. Cold calling is perhaps the most well-known – and it’s pretty much dead at this point.

Still, it continues to linger in some sales departments, waiting to be defeated. Here’s how to goad cold callers out of their comfort zone:

After traversing the land and slaying/capturing various mythical creatures, Hercules’ next task was to … clean a stable? Indeed, Hercules was tasked to clean the many herds of cattle, bulls, sheep and horses in King Augeas’ stable in a single day. Hercules created large trenches to drive river water into the stables, flushing out the mess within.

Think of the river metaphor as a simple solution to a complex problem. By making two simple trenches for the river water, Hercules solved the labor task instantly. If you’re sales strategy is too complex for the prospect decision-makers, try using acronyms like BEND-WIMP to simplify:

In the Greek legend, the Amazonian women were fierce warriors led by Queen Hippolyta. Hercules was tasked to take Hippolyta’s belt, a gift from the war god Ares that identified her as the best Amazonian warrior. Hercules initially convinced Hippolyta to relinquish the belt willingly, by sharing the tales of his previous exploits.

However, treachery by the goddess Hera forced Hercules to slay Hippolyta for the rights to her belt.

Let’s just skip that last part of the story, and focus on impressing prospects. Hercules was nearly able to acquire the belt by impressing Hippolyta – and leaving a good first impression is critical in social-driven sales.

Your presence on LinkedIn serves as that first social impression, so don’t be one of the 49.5 % of users who have an incomplete profile. Here’s how to make sure your presence charms prospects:

These are just some of the trials that Hercules overcame during his quests, ultimately helping to establish the legend that still exists today.

If you’re feeling like you have your own set of social selling labors to overcome, check out how LinkedIn can better automate the process.