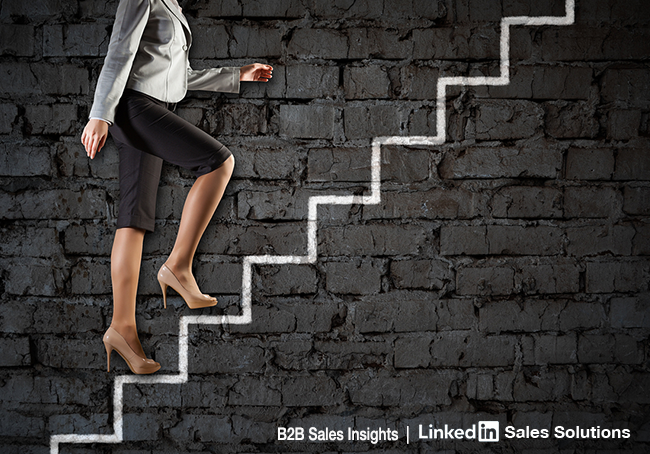 If you want to get promoted, start using social media to help you sell. We studied over 150,000 sales and client-facing professionals who were promoted in the past two years and found that those with a high Social Selling Index (SSI) were promoted up to 17 months faster than those with a low SSI.

Social Selling means faster promotion and the difference between having a high SSI and a low SSI matters more at higher levels.

If we assume this career trajectory for an individual, then theoretically, a high SSI individual contributor could reach VP level 41 months faster or 3.4 years ahead of someone with a low SSI. Hey, it’s only 3 years right?

Three years can make all the difference in terms of career achievement. Germany scored 5 goals in 18 minutes against Brazil in the World Cup semi-finals...imagine what you could achieve in three years.

SSI is a measure of your performance on 4 key activities: creating a professional brand, finding the right people, engaging with insights and building strong relationships. Those who are doing it are more likely to exceed their sales quota and based on this post, more likely to get promoted faster. The impact of social selling is even more important at higher seniority levels. For more information on how to leverage social selling, read our post here.

How did we do this analysis?

Starting with LinkedIn’s total user base of over 300 million, we first identified a pool of users who were in sales and/ or client-facing roles. We used keyword searches on job titles and headlines like “account executive”, “relationship manager”, “account director” listed on LinkedIn profiles.

Next, we identified the people that were promoted from Director to VP, from Manager to Director and from Individual contributor to Manager within a company from April 2012 to June 2014. We also used an algorithm based on job title to classify whether a member’s role level is Director or VP. To avoid complications with titles between companies, we limited the pool to people whose promotion was within a company (i.e. someone who left company A as Director to go to company B as VP was excluded). There were:

Step 3. What was their SSI when they were promoted?

After limiting the pool of people, we then calculated two things:

We analyzed the relationship between SSI scores and promotion time using regression. The relationship was statistically significant (F-test p-value <0.05) meaning that the trend that we were seeing was important. Each advancement (i.e. from individual contributor to manager) was studied as a cohort independent of other advancements (i.e. from manager to director). We looked at differences in promotion time among companies of different sizes but found no clear correlation between company size and promotion time.