Never Walk Alone: How to Leverage your LinkedIn Network for Maximum Success 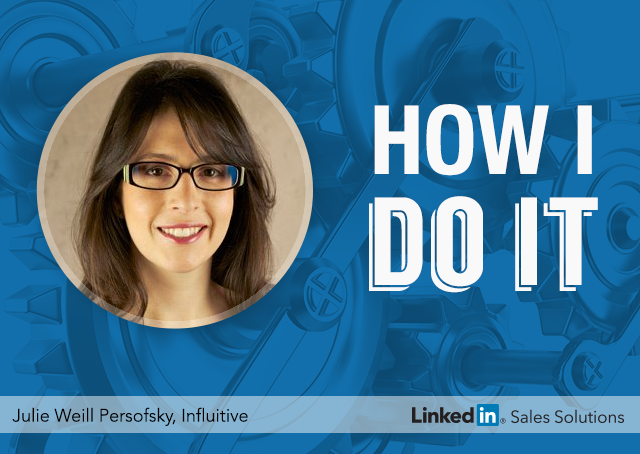 Here’s the scenario: It was an unlikely customer to begin with, but somehow, one of our sales reps had sold into this company through a “buddy” the year prior. They ended up never implementing our software and the person who made the original purchase was let go six months into the contract. We had lost our champion and the account was in real danger of being lost. I was charged with saving it, which really meant: re-sell this account and don’t let it churn.

With only 180 days to do this, I faced a number of challenges:

Who at this company would find what we do relevant?

Path to Success: I immediately turned to LinkedIn to see who I was connected to at this company. Using a series of searches, I found a couple of people who were a good place to start a discussion, at least. I reached out via InMail, requested introductions through mutual connections, and asked my co-workers who were part of TeamLink to reach out to their connections as well. My colleague and I each got in touch with two different people in adjacent roles, and we were able to set up our first call.

Social Selling Tip: The people in your network are more equipped and more credible than you. So use them.

These weren’t the right people to talk to and, unfortunately, the right team was just being formed.

Path to Success: While asking for introductions, I was also looking for common connections to the people in this new group on LinkedIn. Through a common LinkedIn group, I discovered someone at the company who had an adjacent role and had used our product before. I reached out to her via InMail and asked if she would give an impromptu reference on her own time. She agreed.

Fast forward a few months: We’d had plenty of discussions, demonstrated the value of our software, and had discovered our internal champions along with other supporters. I’d presented a package to the company and had a solid plan in place.

However, we still had a couple of challenges to overcome:

Path to Success: This is when the real power of networking, surround selling and advocates came into play. I found a customer who was a common connection with the executive sponsor on LinkedIn. I re-introduced the two of them and pre-emptively offered an unsolicited reference call before the executive sponsor asked for one.

There was no budget available in the group we were selling into for another six months and, in order to avoid losing them as a customer, the deal had to be closed by June 30th.

Path to Success: We reached out to another group who had budget and would also receive benefits from the implementation of this program. However, they wouldn’t just take our word for it. Again, I used social proof and the credibility of my network to convince them. I uncovered peers who have received loads of value from the use of our software. This time, since there was a mutual connection, we just asked our customer to reach out.

The Payoff: Within 24 hours, the executive sponsor and budget owner had spoken to our advocates. As a result, they were convinced that it was the right decision to move forward with our software.

The Lesson: I couldn’t have done this without the power of my network and the networks of our incredible customer advocates. Getting our advocates in front of future customers, and letting their experiences and credibility speak for themselves, meant the difference between losing a strategic account and saving it.

This approach has the added bonus of establishing a peer network for both new and existing customers, increasing the chances that they’ll become stronger users of our product. Eventually, if we do our jobs correctly, they’ll also become advocates who will help us acquire new customers through surround selling.

You never have to walk alone. Find the people in your network who are your prospects’ trusted peers and ask for help.