Why Going Solo Made me a Better Salesperson and Businessman 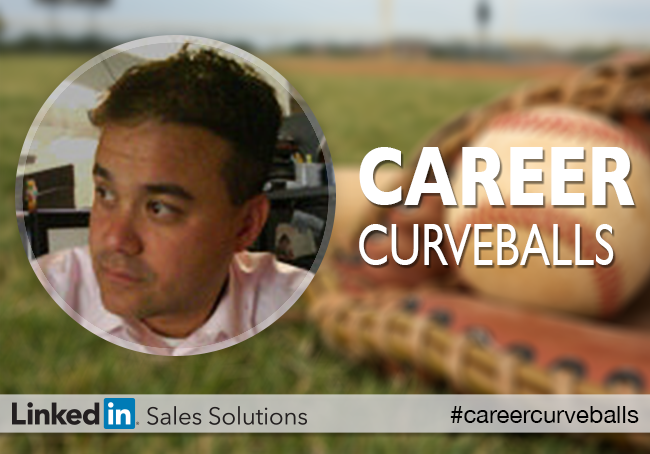 My biggest career curveball was October, 2012 when for the first time in my career, I had no job and no idea what I was going to do next. We spent months working to sell our company so I didn’t spend the time necessary to set myself up for my next step.

Now, I had to deal with a whole new set of circumstances. So I spent a month just enjoying my family and kids. That was awesome. I was tired from the previous year and spent the time hanging out. Well, not the whole time. I spent time talking to and meeting everyone in my network. I just wanted to know what was going on, what was happening in the market, and frankly, catch up with people.

I didn’t panic. Talking to people in my network was the best thing I could have done. I realized that the old adage that “people help people they like” was true. The willingness of people to help was inspiring. Also, in 70% of the conversations, people had great ideas for my next move. I didn’t freak out. I listened. When I was young and was faced with a decision, my dad always told me to make a list of people to talk to and ask for help. I never did. As a matter of fact, I was always embarrassed to reach out to people. He kept giving me that advice and I would roll my eyes and say: “Here we go again”. It turned out to be the best advice ever. I talked and talked to people. It helped me synthesize my thoughts on what to do next.

I decided to start consulting. When I decided on that route, I went back to a lot of people I spoke with previously to ask for more advice. My friends who were in consulting were incredibly helpful. And then reality set in, starting a business was hard. I went from everyone telling me: “I would hire you, you should do it!” to not getting business. My holding pattern began AFTER I decided on what I would do next. It took me months to figure out how to sell myself and actually get business.

When I went about starting my consulting practice, I was cocky. I had developed a brand for myself through years of blogging and speaking. Then I saw the amount of work necessary to get off the ground which was followed by my initial inability to get work. Now I was humbled and a little bit scared. I thought it would be easy and it wasn’t. I had mouths to feed. What I am going to do? Once it really hit, then I had the urgency. Remember, I asked for advice and got a lot of it. I knew what I had to do, I was just moving slow. I remember sitting in bed and my wife asking: “Can we take the boys on a vacation?” I got nervous. I had the time now…but I wasn’t settled into a revenue generating rhythm. I ran downstairs to my office and spent the entire night organizing myself. After staying up all night going through this catharsis, I made a plan and started going. My family inspired me.

As I have mentioned throughout this post, I had support but it wasn’t until I decided to take true personal responsibility did things change. I actually needed to feel desperate. As Dan Waldschmidt says: “Be desperate for success”. I couldn't’ have done it without support, yet at the same time, I couldn’t have done without myself. I had to own this challenge. I had helped build companies in the past but there was a team and there is comfort in that. When you realize that if you don’t build this business, your kids won’t eat. That is different. I am not advocating that people get stressed out. What I am saying is, desperation is good when you turn it into action.

This experience was the best thing that ever happened to me. I have been writing, speaking, and giving advice to people for years on their sales and marketing efforts. Now, I had to put everything to the test with no budget and no support. Start with sales. I couldn’t complain about the product, the leads, the messaging, etc. I was selling for food. For marketing, I had to market myself now. I had to create content, drive leads, and brand myself. Anything I did HAD to work. Now that is chicken soup for the soul.

I had to rethink my goals, responsibilities, and how I went about my day-to-day lifestyle. After years of managing people, I forgot what it’s like to be in the trenches which was an “eye-opener”. You have to keep yourself organized. I realized in the past a day full of meetings made it easier to stay organized. To get real work done, I had to impose organization on myself. I became rigorous about my schedule.

The time away allowed me to spend time with my family. I have twin boys who were 1 years old when the crisis hit. I made sure I worked during the day, but always shut off and spent 5pm to 7.30 with them. I want to keep that up. When I was talking to people during the crisis, people with kids always said “It goes fast so at least you have time to spend with your kids”. I realized that I don’t want any regrets as a father and a husband. As I set my goals and organize my day, I set it up so I can be a great family man. Would it have been different if I had continued on as I was? I hope not, but I credit the crisis with allowing me to solidify my resolve.

I learned enough to write a book. There are few important learnings that really stand out. First off, I learned to be agile. You don’t have time. After my month off, I started sprinting. I had a plan but I a made changes as I ran. If I had tossed and turned over what to do next, I am not sure what would have happened. Instead, I learned and adjusted on the fly.

I also learned the true power of my business network. People helped me through this and I am deeply grateful. I also realized that my role in my network is to give back as much as I can. I make it my priority to give.

The biggest learning was so important: You don't know if you can sell until you have to sell for your food. It’s you, you are alone, and you gotta sell to support the family. I had to cold-call, network, pitch etc it to get my business off the ground. No one to blame but myself. I had to put my ideas, tactics, and strategies to the test. The real test.

Looking back, if I had to do anything differently, I would have started humble. Cockiness set me back. I didn’t panic right away because I figured “I’m me”, When you are cocky, you aren’t desperate enough and won’t put in the work necessary to be successful.

As I mentioned, this career curveball was an incredible learning experience. Here are three tips that I live by:

Many sales people I talk to complain about the 2-3 factors that make their job harder (no training, no marketing, etc). Of course, the organization needs to know but they can’t be crutches. You need to plan to work like you are on your own. Anything you get from your organization is a bonus. This mindset will make you better.

2. Have a minimum of 10 conversations a week

After my initial experiences talking with people in my network, I set my own rule: 10 conversations a week. The value of talking to people was immeasurable. I learned something new every conversation – how I should sell, how I should market myself, what I was missing, messaging, etc. And of course, the network will provide you with your best leads. The people I talked to referred me to someone else. My first deals were all from referrals. Interestingly, these deals came from people I never would have dreamed would have made the right introduction. I have kept true to the “conversation rule” ever since and have been hitting my conversation number on a weekly basis. I have been getting deals from referrals ever since.

The famous sales expert Jill Konrath’s new book is about agile selling. That topic could not resonate more with me. To be successful today, you have to be willing to learn fast. You can’t just “go-to-market” set in your ways and hope to succeed. You have to be open to learn new things and you have to be willing and able to try to make these adjustments on the fly.  I got better every day not just from repetition but from being able to continue to add new tactics and adjust old ones. I took in lots of information and didn’t sit on it. I used it. Many experienced sales people are having a difficult time adjusting to the new buyer and it’s putting their careers in jeopardy. Set aside 30 minutes every day for self-learning. (More is better)

After the initial crisis, I rebuilt myself with my own consulting business. Since then, I have teamed up with Scott Albro to start another business. Everything I learned during the crisis is being applied as we speak. I am a better sales person and businessman as a result.