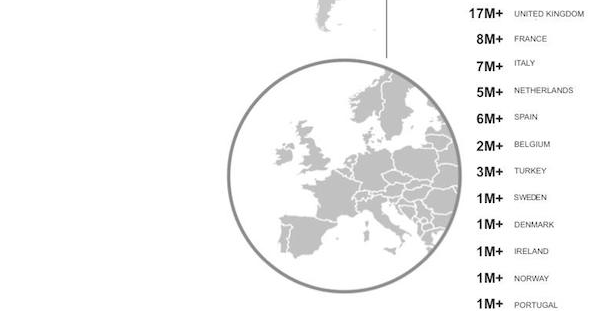 Let me start by saying that I am a Canadian, working for a U.S. company, living in London for the past year.  After working with the sales teams with our largest global clients -- some based in the U.S. and others located in Europe -- I have come to realize that social selling on LinkedIn is somewhat different in Europe than it is in North America.   These differences primarily relate to market readiness, cultural differences, and the general economic climate.

If you are a sales rep in North America and need to prospect into the European market, there are a few things you should know about the nuances of social selling in various countries in order to be as effective as possible.

First of all, why use LinkedIn?  With over 330 million members globally, over 80 million of those members are now in Europe.  In Q3 2014, 75% of new members from outside of the US.  In other words, your European prospects are ready and waiting for you on our platform.

To come up with these insights, I interviewed LinkedIn account managers and relationship managers working in these markets, since they  know these regions best.  What I gleaned from these discussions was a high-level overview of social selling approaches  in the three European countries with the highest numbers of LinkedIn members: the U.K., France and Italy.

Any sales rep who does business with the Brits has to recognize the importance of developing trust with them– and that will take some time. Unlike the more open and quick-to-make-friends culture found in the U.S., British people tend to be more guarded.  A typical Brit’s inner circle of relationships starts with family, followed by close friends, then less close friends and acquaintances.  Business relationships fall outside of that core group and are typically held at arm’s length.   Sales reps aren't necessarily trusted, and even when armed with the right statistics and details, they are treated with some skepticism.

In the U.K. business world, there is structure and hierarchy. As such,one must respect the fact that it’s not necessarily appropriate to approach the most senior decision maker directly by by-passing subordinates who may still be helpful. That’s why cold calling is not necessarily a successful sales tactic. You need to be introduced to a prospect by someone they  respect.  That’s why the art of the introduction is so important.

When you do reach out to a British businessperson for the first time, reference a neutral topic (like the weather) or something business-related, because leading with something personal is considered to be too intrusive.  Also be mindful of the fact that there is a very strong “old boys” network in the U.K. – especially for those who went to private schools. Leverage an alumni connection where you can.

Like the British, it will take time to develop a business relationship with French prospects..  French employees don’t necessarily connect with their bosses, especially not at the CEO level. As in the U.K., hierarchy is important there, so try to reach out to someone who is at the same level as you, or leverage someone in your network for a warm introduction.  The French respect professional hierarchies, and the influence of a manager is very strong, so when you are told to prospect a little further down in the organization and the directive comes from someone higher up, you can still make progress.

In France, the term “mise en relation” – literally “put in relation” – is the notion of the warm introduction.  Personal networks are important in France, and so is how you work them.  Much business is done via personal introduction.

In terms of outreach, there is a big difference between written and spoken French. So when you do reach out to a prospect via an InMail, make sure to err on the side of caution by being more formal than casual. When engaging with someone at a more senior level, it’s imperative to use a more formal tone and language.

The Italian market still thinks of LinkedIn as a social network, which is why sales reps and business leaders aren’t always using it, nor is it necessarily used to find a job. Those who do view LinkedIn as a professional network, see it as a place to create a profile and nothing more. It’s still seen as a “nice-to-have” and not a “must-have” for business.

Unsolicited email and cold calling are still business norms in Italy, even though Italian business people generally understand that it’s not especially effective. Business there is hierarchical, and relationships are important both for business and to find a job.  Therefore, it’s important to leverage your network to secure introductions or referrals from people trusted in your network.

InMail can also be effective in the Italian market, depending on the content. It is considered appropriate to reference a personal connection or a business insight – as long as both are relevant.  Whatever the case, be sure to use the proper business language and tone.

That covers my social selling tips for for the U.K., France and Italy. In my next post, I’ll address social selling best practices in the Netherlands, Spain and Germany.