What’s all the Fuss about Getting More Women into Sales? 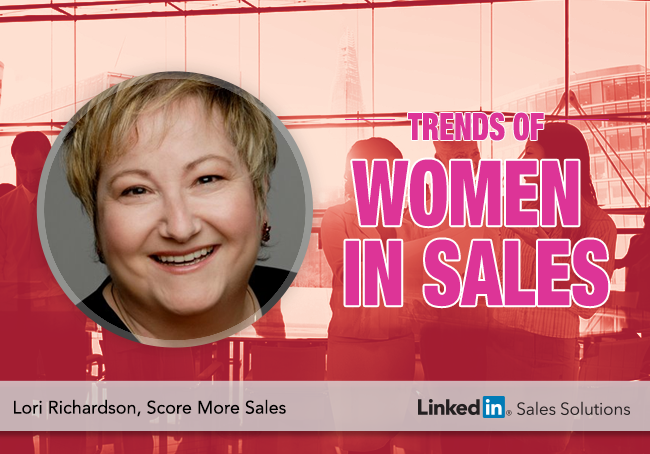 I knew it was a man’s world when I got into technology sales in 1983. I specifically sought it out, because I was a young single mom with a degree in Early Childhood Education who was making minimum wage working at a child care center.

At 19 years old, I left a physically abusive marriage with only my life, $50 and my 6-month old baby. I was smart, albeit I made some poor choices early on – and I knew one thing- I had to make the same money as any other head of household. My route to a sales career was indirect though.

While working my minimum wage job (working with two-year-olds, a skill that would later serve me well in selling), I enrolled in a 6 weekend program on non-traditional careers for women. If I had to become a flagger or pour concrete - I would so that I’d have the money to comfortably raise a family.

After hearing about jobs involving physical labor, I was most fascinated with a presentation on electronics technology.  So, I started going to night school and received a degree in Microcomputer Hardware.

Soon it hit me that people with this degree sit by themselves around circuit boards all day. I finally found out how isolating for me that was, and what a “people person” I am.  I really didn’t want to work on electronics, but I had grown up in a family run business where I learned how to sell, working for my first female role model, my grandmother we called Mimi. Somehow – I don’t know how – it came to me that maybe I could sell something electronic.

I searched for a job selling the first PC computers and accompanying software, accessories, and services. My first job was selling tech products for a small company with little revenue possibilities but it helped me learn the business.

Later, I looked for a bigger company where I could make a lot of money doing something I was comfortable doing – building relationships and selling. I got the chance at a computer store in downtown Seattle called the Byte Shop.  I learned how to sell even better because we had regular training from manufacturers like IBM, Apple, Compaq (now part of HP) and Hewlett-Packard. One of the salesmen that interviewed me kept asking me in my interview, “But do you like to sell?” I realize now how important that question is in any career. If you don’t like what you are doing you will never be successful.

I started in sales on straight commission, meaning NO salary -  so I only could pay bills by selling things. You can bet I learned how to be successful fast!  What I loved about my job was that I made as much or more than my male counterparts - on an equal playing field - based only on what I sold and the deals I created.

Fast forward through a sales career that lasted fifteen years. I bought my first house at age 29 and was a stable provider for my family. My son was able to play expensive, competitive youth sports and go on to boarding school and a top private university.  I did run into roadblocks and glass ceilings. For example, I never got promoted beyond sales manager and I was passed over for promotion in one case because I was a single mom. Yep, that was a potential lawsuit.  Rather than suing, I quit and went to an industry counterpart where my good customers were adamant about coming along, too.

Now working within the technology / SaaS / manufacturing sales fields in mid-sized and larger companies as an influencer and sales consultant, I still see the same thing I saw 30 years ago: not a lot of successful women sales professionals. Companies are often promoting from within, so fewer women in sales means few women sales leaders.

At one of the companies I worked for years ago I was the first woman hired in an outside sales position. Today I get in front of teams that are still 80-90% male. I cherish the interaction with some of the few women whose circles I’m in that are sales leaders at companies like LinkedIn, Salesforce.com, IBM, EMC, and NetSuite.

Sales execs want to hire sales reps with “killer” instincts and sales “animals” who perhaps were high school or college athletes. Those descriptions don’t always include smart, collaborative, innovative women. We like people like us, and what is not sought after is not found. My friend and mentor, Trish Bertuzzi, an overwhelming success in B2B inside sales wrote a great post about how technology companies can attract more women to enhance their sales teams.

Often, many young women want a career path where they can get a college degree, like a marketing degree, to help them feel more qualified for a position. There are far too few colleges and universities offering sales degrees.

My Tips for Longevity in Professional Selling

If you are a woman considering the profession of sales, or if it somehow chose you, here are my suggestions for success:

I’m so proud of the profession of sales and the career it offers young women that I became President of Sales Shebang®, a virtual community of the top women B2B sales experts. It was “gifted” to me by Jill Konrath with no expectations. The website has just re-launched and will be getting more and more content added to it.

Just like Sarah McLachlan launched Lilith Fair in the late ‘90s to help showcase female musicians on a tour, the goals of Sales Shebang® are to showcase the top women B2B sales experts as well as provide sales tips and strategies for sellers.

Now is a great time to get into a professional selling career. There are tremendous resources and more companies wanting diverse and successful sales teams. Don’t go it alone – many of us are here to offer a hand.