The Most InDemand Employers by Country Revealed

Last week we unveiled this year’s 100 Most InDemand Employers worldwide to great fanfare. Now, it’s time to reveal which employers are most InDemand at a regional level, based on the billions of interactions that are happening between companies and members on LinkedIn.

Without further ado, here are the lists of the 2013 Most InDemand Employers by country:

A few interesting patterns emerged as we dug deeper into the data:

Members appear to be more attracted to locally grown businesses - more than 60% of the ranked companies are headquartered locally. For example, Google, Vale, Suncor Energy, BMW, L'Oréal and Shell took the top spots in their respective HQ countries.

Bigger companies dominated our ranking of the 100 Most InDemand Employers worldwide. But at a regional level, smaller companies like ASOS.com, Twitter and Canal+ held their own against the big guys.

Tech & Telecom companies dominate across the regional rankings, making up 46% of all InDemand Employers. But the U.S. ranking features more Professional Services companies, Canada has more Oil & Energy and the UK boasts more retail because everyone knows Brits have the best shopping!

Two companies are featured on every single global and regional ranking: Microsoft & Accenture. Impressive to say the least.

Here are some more fun facts: 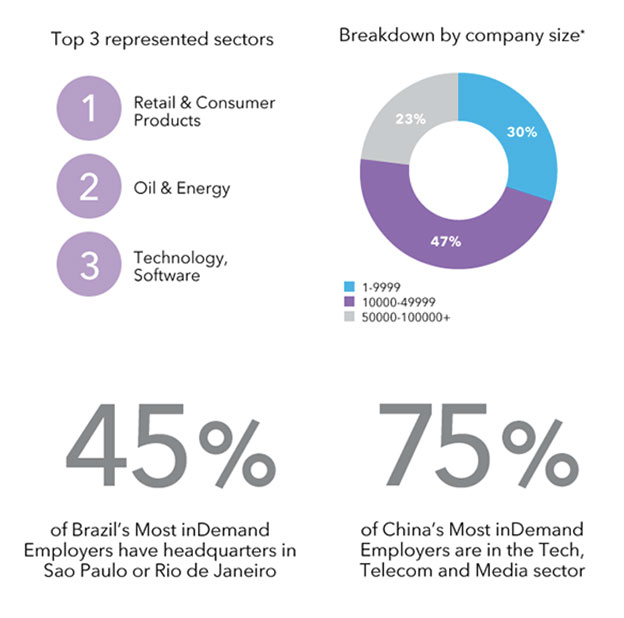