If you live and work in Silicon Valley one thing has been obvious for a long time. When you walk in to any tech company office, the male software engineers dramatically outnumber their female counterparts. Now we have the numbers to prove it - and it turns out that this trend applies worldwide, not only to the Valley.

You can see the full industry breakdown below but it’s worth noting that the numbers for high tech software and hardware companies are especially troubling – only 16% and 9%, respectively, of their software engineers are female. These two fast-growing, dynamic and arguably egalitarian sectors seem to have a hard time welcoming female software engineers into their fold (as suggested by a few recent news stories swirling in the media). 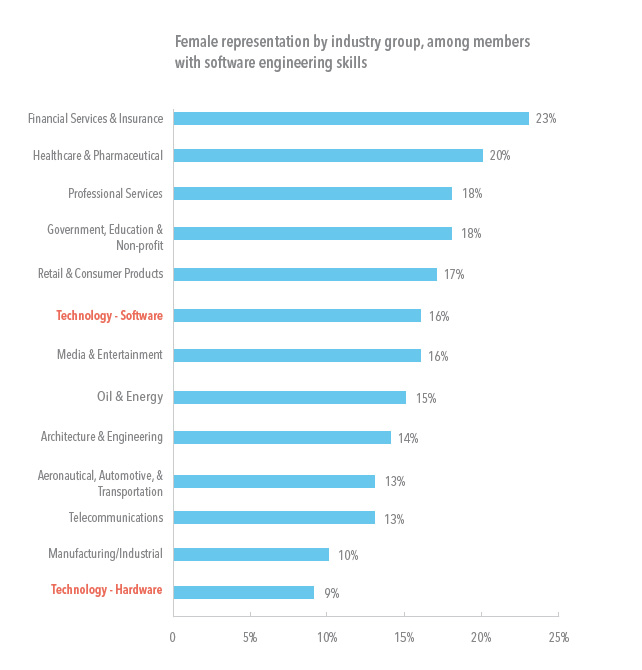 We also took a look at software engineering talent that was hired in 2013. Again, the technology sector is behind several non-tech industries when it comes to female representation in their most recent hiring class. 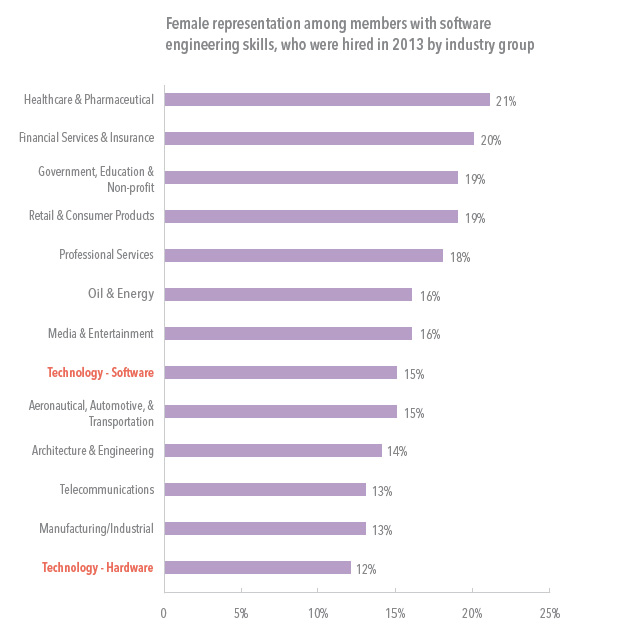 Bringing gender parity starts with addressing the gap in education, but recruiters and hiring managers can also make a significant impact by creating and empowering more female role models. It is even possible to create a virtuous cycle, where more women pursue degrees in STEM because there are more female leaders to follow.

As another step towards this goal, last week LinkedIn announced our partnership with MentorNet, a national nonprofit that provides all STEM students with access to high-quality mentoring experiences by connecting them with professionals in their field.

Bringing awareness to problems like gender inequality in the technology sector is part of our mission to share insights related to the Economic Graph. Our vision as a company is to create economic opportunity for every member of the global workforce and we believe that highlighting problems like these is be part of making this vision a reality.

Methodological details: The results of this analysis represent the world as seen through the lens of LinkedIn data. As such, it is influenced by how members chose to engage with the site, which can vary based on professional, social, and regional culture, as well as overall site availability and accessibility. These variances were not accounted for in the analysis.

Keen observers will note that there is no field for gender on the LinkedIn profile. We have inferred the gender of members included in this analysis by classifying first names. Members whose gender could not be inferred based on their first names weren’t included in the analysis.