Not all cities are created equal when it comes to recruiting recent graduates. As a matter of fact, we’ve identified the top 10 cities globally that are grad magnets. If you are looking for candidates for your entry-level jobs and internships, then you should focus your recruiting efforts there.

To come up with the list, we looked at the LinkedIn profiles of recent graduates and analyzed the geographical movements of those who started a new job between November 2012 and November 2013. Here are the top 10 destinations most popular among recent grads. Maybe you can guess some of the cities, but others are quite surprising:

One interesting destination in our top 10 is the Greater Minneapolis-St. Paul Area. As the 15th largest US metropolis with about 3.2 million people, the city a hidden gem in the heart of the Midwestern United States. It looks like the area is becoming a hub of talent by attracting grads from the many universities in the central United States. In fact, Minneapolis recently made the top 25 of the Forbes list for Best Places to Start Businesses and Careers, boasting affordable housing, job growth, and low unemployment.

Another surprise: consider the city that came in on 4th place -- Madrid. According to Statista.com, Spain’s youth unemployment rate is at 54%, almost 30 points above the average for the European Union. As we looked closer, 9 of the top 10 cities that students are leaving in order to move to Madrid are within Spain. This suggests that as they enter the job market, recent grads are first flocking to the capital in search of opportunity before searching abroad. Long-term talent loss for Spain is definitely a concern as additional LinkedIn analysis on Talent Migration identified Spain as a the country with the largest net loss of talent in 2013.

What are the jobs recent grads take?

Once recent grads move to those top 10 cities, here are the jobs they most frequently accept: 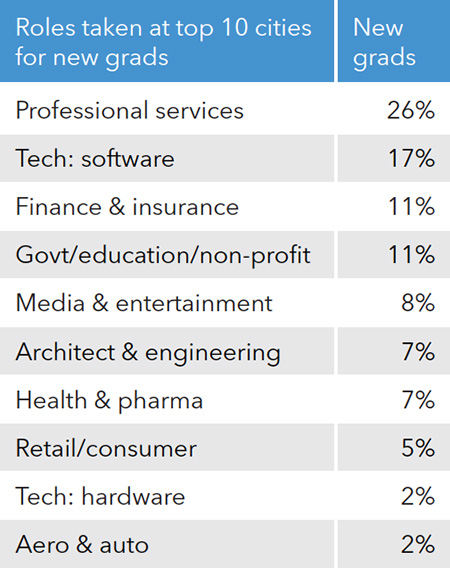 So if you’re looking to hire recent graduates, think beyond your typical go-to spots and see if you have presence in any of the markets in the top 10. You can find more information about recent grads supply and demand in our student talent pool reports.

As we continue to build the Economic Graph - a digital map of the global economy - we’ll continue our goal of matching talent with opportunity at scale. Youth unemployment is one of the most important challenges of our time, and we hope that through our research and data, we can provide meaningful solutions in the near future.

Methodological details: The results of this analysis represent the world as seen through the lens of LinkedIn data. As such, it is influenced by how members chose to use the site, which can vary based on professional, social, and regional culture, as well as overall site availability and accessibility. These variances were not accounted for in the analysis. Additionally, nationality and visa status are not fields included in the LinkedIn profile. Therefore, we cannot make any inferences on the citizenship of our members who were included in this analysis.

We determined the geographic movements of our members in the last year by looking at every new position that was added to profiles between November 2012 and November 2013, which included a regionally specific location (e.g. “Greater Los Angeles Area”) that differed from the regionally specific location of the previously held position (e.g. “Greater New York City Area”). Next, we excluded movements which did not exceed 100 miles (161 km), based on the direct distance between two geographic coordinates, generalized as the geographic center of each region. Next, we looked at all movements that included 100 or more members.

“Destination cities” were defined as those that were the terminus for more than 10 such migrations of 100 or more members, that exceeded a distances of 100 miles. We defined “recent graduates” as members who were 0 to 3 years removed from the graduation year of the last school listed in the education section of their profile.