Today it doesn’t take much time or hard labor to identify all of the passive candidates you need. However, if you want to recruit and hire any of them, you’ll need to master a few critical techniques. Here they are:

Step 1: Learn the “time is your most valuable asset” close

More than 40 years ago, about three days after starting my first management job – a financial management spot at a major F100 industrial company -- I was assigned to the corporate MBA recruiting program. Two days later I was interviewing MBA students at the University of Michigan.

During the first interview, my boss drew a chart like the one shown below. He urged students to select jobs on the far left – those that maximized career growth and learning. His point was by staying on the steep part of the learning curve (the blue line) a person could get the equivalent of 5-6 years experience in 2-3 years. He went on to say that at most companies you wouldn’t get promoted for a few years, long after the curve flattened out. However, at our company, while it would be a wild ride, you could get promoted in less than a year. It was true and I’ve been using this Career Zone curve to present “wild ride” opportunities ever since. 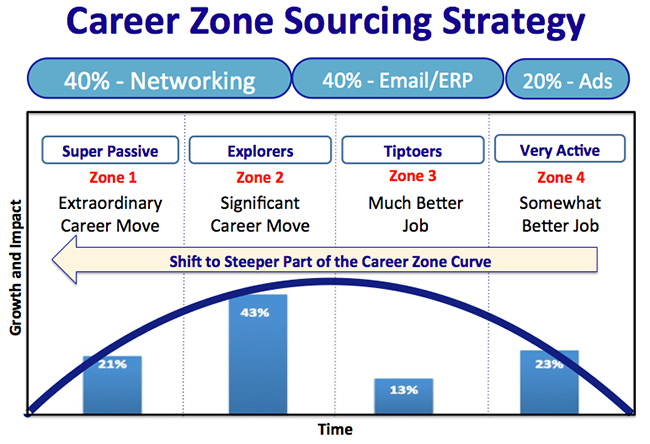 As soon as you get the candidate on the phone, ask how long she or he has been looking. This will give you the insight needed to position your candidate into one of the four Career Zones. (The blue bars with percentages represent the size of each pool based on a survey I conducted last year with LinkedIn of their fully-employed members.)

Career Zone 4: The Very Active. The best of the very active get new jobs within weeks of starting to look. So move fast if you want to hire the person. Since they’re fully-employed, the best of this group will take the job that seems to offer the best long-term career move. To win this battle you’ll need to prove your job is on a steeper part of the career curve.

Career Zone 3: The Tiptoers – Just Starting to Look. Since these people are not being rushed into making a decision, it’s important the recruiter and hiring manager clearly spell out the career opportunity using a performance-based job description. Sometimes Tiptoers cling to their current jobs too long so it’s important recruiters make the case that staying in the current job is often riskier than changing.

Career Zone 2: The Explorers – Open to Discuss Opportunities. These are the true passive candidates. They’re ready to be recruited for the right opportunity, but don’t move too fast. First find out a little about the person to determine if your job is in the ballpark. You have a chance if your job offers a far steeper career curve with a reasonable compensation increase.

Career Zone 1: The Super Passive – Open to Network. These people are highly satisfied and not open to consider a career move, at least during the first call. Despite this, most are open to network and they’re a great source of referrals. Once you’ve built the relationship, most will hear you out if you have an extraordinary opportunity. However, it’s hard to hire these people unless the career curve is much steeper and the compensation package is equally extraordinary.

Step 3: Sell the discussion, not the job

Once a passive candidate expresses some interest in talking, don’t start selling the merits of your open job. This is will cut the conversation short before it even gets started. Instead, slow down, review the person’s LinkedIn profile, find out why the person might leave and what a career move would need to look like. Even if your job fits the person’s needs, don’t rush it. Suggest another call. If this goes well, offer the possibility of an exploratory discussion with the hiring manager. It takes hours of evaluation and discovery spread over multiple meetings for a true passive candidate to decide to switch jobs. Don’t try to compress it into the first five minutes of the first call.

I recommend a balanced sourcing approach to reach the entire talent market. 40% of your efforts should be on building a pool of followers, expanding employee referrals and using Boolean search to identify possible candidates. Another 40% should be on proactively targeting referrals, using a combination of direct calls and emails to reach them. You’ll maximize your productivity by mentioning a common connection, only calling those who have been pre-qualified, and asking these people if they’d be open to discuss a possible career move. There are some very strong candidates in the Very Active pool, but no more than 20% of your sourcing efforts should be focused on job postings. However, to have any success at all, you’ll need to post compelling stories like this rather than traditional skills-infested job descriptions.

Recruiting passive candidates requires much art, a lot of science, strong selling and persuasive skills, and a big dose of psychology. To pull it off, recruiters need to orchestrate an information-sharing process that provides the candidate the information needed to make a long-term career decision. But just as time is your candidate’s most valuable asset, too many recruiters think going slower and having more discussions is a waste of theirs. In my opinion, the real waste is ignoring the 80-90% of the talent market that isn’t interested in being hustled into a lateral transfer.