5 Research Studies that Every Recruiter Should Read

In the last few years, a handful of studies have illuminated shifts in the way we hire and think about candidates.

Below are 5 of these studies. Hopefully they will inspire you and help you think ahead about some of the major trends that are affecting talent acquisition.

Google is in the top 10 of almost any “Best Employers” chart, meaning that the company could be extra picky when selecting who they hire. We have all heard stories about throwing in grueling brainteasers during interviews and seasoned executives getting asked to dig up their college GPAs.

Part of the Google DNA, however, is making decisions based on data, so their HR team decided to see if screening people based on school grades and logic puzzles produced better hires.

In 2013, Google’s senior vice president of people operations Laszlo Bock shared the results of this internal report, revealing that test scores and GPAs have almost no correlation with long-term on-the-job success for experienced hires. These findings dramatically transformed Google’s hiring strategy in at least two ways: (1) the tech giant no longer asks for GPAs and test scores from candidates who are more than a few years out of school and (2) hiring teams now focus on behavioral interviews rather than brain teasers. As of last year, the proportion of Googlers without a college degree was on the rise.

2. It’s Better to Train Rather Than Hire Stars
Source: HBR

In 2004, Harvard Business Review made the argument that it’s better to nurture rather than hire stars. Why? Strong performance is often related to the context in which the employee has worked. It may be the case that comparatively weaker performers were lacking the resources and the right environment to live up to their full career potentials. In the context of this study, strong performers were more likely to have better resources and more attentive managers.

The key takeaway from this argument? Past performance may not be the best predictor for future success — it’s important to prioritize potential above stardom for two reasons: (1) stars are few and far between and may not be able to replicate successes from past roles, and (2) companies risk overlooking candidates who are ‘stars in the making.’

This 2014 survey examines recruiters’ confidence in the economy, their hiring activity, and job acceptance rates.

According to the report, recruiters are confident in the U.S. economy and are increasing the pace at which they are sourcing and interviewing candidates. However, talent acquisition leaders are struggling to attract top performers due to (1) a perceived shortage of skills across markets and (2) a rising trend of top performers receiving multiple offers.

According to recruiters’ observations, the job market has become increasingly candidate-driven and less employer-driven over the last 3 years 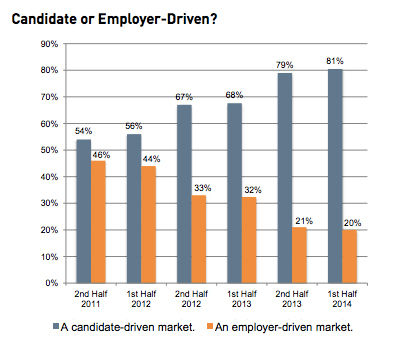 The pace of hiring is expected to increase in the latter half of 2014, creating an atmosphere of even more ambiguity for recruiters who are struggling to compete in a career marketplace that is largely talent-driven. The report concludes that: (1) employer branding is more important than ever  — a company with a disjointed talent brand will turn off candidates. (2) Salary and benefits need to be aggressive since top performers have a range of available options. (3) Employers can increase their chances of securing top hires by speeding up the hiring process.

4. Only 13% of Employees Consider Themselves Engaged at Work
Source: Gallup State of the Global Workplace Report

HR departments know that employee disengagement is a major financial drain. Not to mention, happy employees are productive employees, which is why it’s important to tackle this problem head-on. But how widespread of a problem is disengagement? 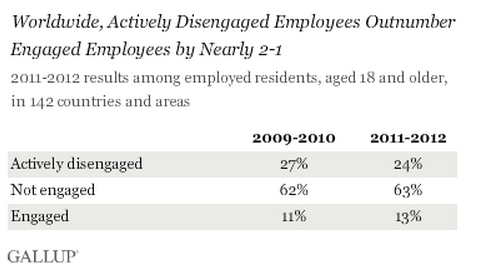 Gallup sought to answer this question in its State of the Workplace survey. The findings revealed that worldwide only 13% of employees consider themselves engaged at work -- a slight uptick from the 11% who reported feeling engaged last year. In the U.S., only 29% of workers consider themselves to be fully engaged and making a positive impact at work.

Companies need to raise the bar on workplace culture by keeping employees engaged -- through internal mobility programs, for instance.

5. 85% of the Workforce Wants to Hear from Recruiters
Source: LinkedIn Talent Trends 2014

This year we released a detailed survey of 18,000 professionals across 26 countries, asking questions ranging from how satisfied were they with their work to what would attract them to a new job.

The result we were most eager to get was what percentage of the workforce is open to discussing a new career opportunity. As you can see in the chart below, a whopping 85% of respondents would want to talk to you. That’s up from 80% back in 2010. 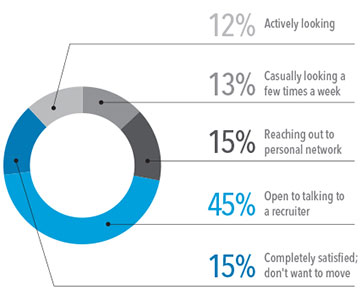 The trick is that this 85% of professionals have varying levels of interest. While some are actively looking for a new job, others are just relying on networking, and a sizeable portion is not actively looking but is open to being approached by a recruiter. This means that you can’t rely on candidates to find you – you have to warm them up through effective talent branding first. Then serve them up the right opportunity, wrapped up with a good dose of personalization and a promise for more than a later transfer.

Get to know your talent on a personal level, understand their full potential, invest in their learning and growth. Your business’s bottom line will thank you for it.