In theory, every hiring manager should know what her recruits want to get out of their job. In practice, it turns out that hiring managers today have trouble pinpointing the priorities of their youngest Millennial prospects. In some cases, the more experienced the manager is, the less they understand what a recent graduate needs.

We promise, there are numbers behind this bold statement.

In both cases, the participants were asked to choose their top five from an identical list of typical employment value propositions. Below are the results to both sets of questions: 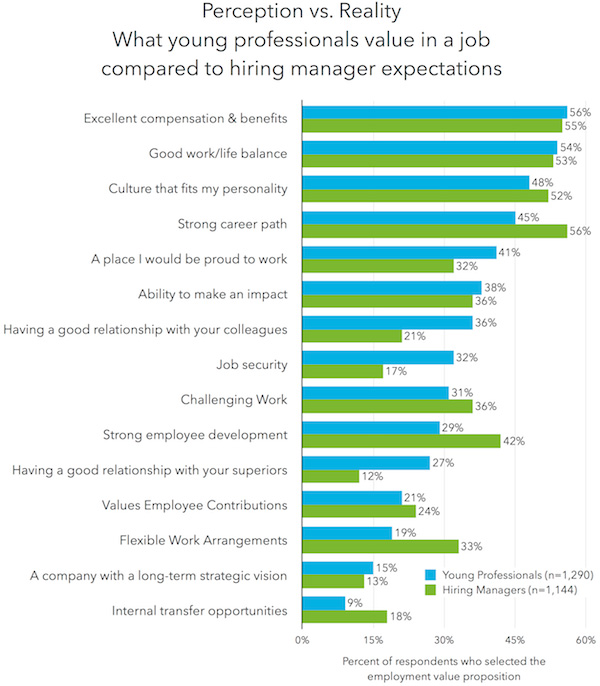 Hiring managers know that compensation and work/life balance are important, but not sure what else

Hiring managers and youth appear to be aligned on the things they say matter most: getting paid and having good work/life balance. Generally speaking, you’d be hard pressed to find anyone who puts little value in either of these things.

Compared to what their managers think, young professionals are much more likely to self-report that they value job security and having good relationships with colleagues/management. Hiring managers seem to have a perception that young professionals are risk-taking loners. Reality suggests otherwise. It seems that graduating into a crappy economy has the effect of turning go-getters into pragmatists.

Compared to what their managers think, young professionals are much less likely to self-report that they value challenging work, a strong career path, and flexible work arrangements. Again, reality doesn’t quite match perception in the eyes of hiring managers, who seem to peg young professionals as being much more professionally driven than actuality.

The younger the manager, the more likely they are to align with the needs of young professionals

We hypothesized that the age of the hiring manager may have an impact on their perceptions of young professionals. We figured younger managers would be more likely to relate to young professionals, and that their responses to our survey would be aligned. After we broke the responses down by generation, we found that our hunch was confirmed for three specific value propositions, though not necessarily in the manner we predicted...

Interestingly, we found one value prop where youth and managers in their age group were not aligned. The older the hiring manager, the less likely they were to think that youth want a strong career path. Perhaps a bit of selection bias is going on here, as younger managers may have gotten to their position at a young age because of their own emphasis on promotions and upward mobility.

How you can create a well-informed student recruiting strategy

Today we are releasing our student recruitment eBook, which offers specific strategies and insights into finding and engaging future young professionals with your company. As recruiters and hiring managers, understanding the perspective of this audience is the first step in creating an attractive talent brand and reaching your target recruiting audience.

Note: This research is part of LinkedIn's effort to build the Economic Graph, a digital map of the global economy.

Methodology: The results of this analysis come from two separate studies, the first of which was conducted between January and March of 2014, among 1,290 members who self-identified as young professionals (having 0-3 years of working experience). The second study was conducted in July 2014 among 1,144 members who stated that they currently manage at least one young professional (0-3 years of working experience).

In both studies, only members who live in the United States and work in the consumer goods, pharmaceuticals, financial services, technology, entertainment, and media industries were considered. Members who opted in to participate in research studies were contacted via email to take an online survey.

Special thanks to Afrodisia Cuevas and Allison Schnidman for their help in conducting the research.