How NOT to Measure Recruiter Performance on LinkedIn

“I don’t like to fail,” admits Melissa Thompson, Senior Director of Global Talent Acquisition at Citrix.

Most of us would say that.

What’s harder to admit is when we have actually messed up.

Luckily for you, Melissa is brave enough to do so.  Read on so you don’t make the same mistake she did.

When Melissa joined Citrix in 2010, the company was measuring recruiting success by time to fill and cost per hire. “The problem with those metrics was they neither drove recruiter behavior nor improved results,” explains Melissa. “They led to unintended consequences: recruiters were doing unnatural things to get those numbers down instead of focusing on hiring high-quality talent.”

As part of her task to build out Citrix’s talent acquisition function, Melissa developed a set of metrics to track recruiting success, both for reporting purposes and to show recruiters what achievement looked like.

She and her team crafted a scorecard with four main buckets. Recruiters could earn a bonus of up to $2,500 per quarter if they hit their targets.

Volume: how many fills per month, quarter, or year. The target is 20 per month.

Cost: “Instead of a traditional cost-per-hire metric, we use percent direct sourcing. If recruiters are direct sourcing hires, then they aren’t using a high-cost fill mechanism. The counterpart metric to that is percent agency use.” The target agency use is 5% or less and direct sourcing is 30% or more.

Quality: “At first we used an efficiency metric as a proxy for quality, i.e., how many candidates did we have to put in the funnel to get an offer acceptance. Now we do a hiring manager satisfaction survey, and are moving to net promoter score for both hiring managers and candidates next year.”

To ensure she was getting the proper ROI from her LinkedIn seats, she added Recruiter metrics to the scorecard, and made them count for 15% of the overall score.

The two LinkedIn metrics were:

When things don’t go as planned

“Recruiters gamed the system,” explains Melissa. “Since there was a bonus tied to the scorecard, people followed the letter of the law rather than the intention.”

They achieved the login metric simply by logging in every day. They didn’t do much, but they were logged in.”

“While some recruiters improved their InMail content and increased their response rates,” she adds, “Many just increased their number sent without doing a good job of crafting them,” she explains.

After looking at two quarters of data with the new metrics, Melissa and her team figured out that recruiters were manipulating the way they worked just to hit the numbers.

“Instead of tracking log-in hours, we started tracking days the recruiters were utilizing the platform’s full capabilities, such as conducting searches, saving candidates, and building projects around requisitions,” she explains.

“In addition, instead of focusing on response rate only, we started measuring accept rate as well. While a candidate response of ‘No thanks’ counts toward a response rate, a candidate who actually accepts an InMail is open to discussion.”

Melissa also made the LinkedIn metric a larger part of the overall scorecard, from 15% to 20%.

“Don’t be afraid to change the metric if it’s not doing what you want it to be doing,” advises Melissa. After all, the goal of having a metric is to influence recruiter behavior. If it’s not happening, then it’s time to re-evaluate. People will focus their time and attention on exactly what you measure and reward, so be sure to target the specific competencies you want to improve.”

Here’s a sample of the LinkedIn portion of Citrix’s recruiter scorecard:

“We started training as a group. We had a LinkedIn trainer come in as well as provided online training. In addition, head talent acquisition leaders became responsible for coaching those who fell below the targets.” 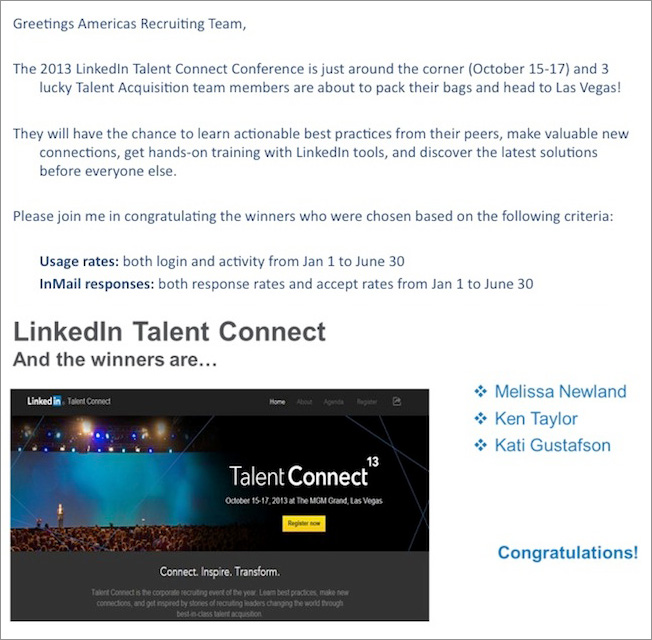 “We realized that we had some very effective old-school recruiters who would use their LinkedIn profile to recruit, but didn’t gravitate toward Recruiter.”

Everybody doesn’t have to have a seat. For some recruiters, it was their decision. For others, we’d evaluate their performance and determine if it was appropriate. We have 30 seats globally, so in the U.S. there are probably eight or nine who don’t have seats.”

5)   Tap your LinkedIn rep for intelligence.

“If I had to do it over again, I would have engaged more closely with my LinkedIn reps in order to better understand what other companies were doing to maximize their Recruiter ROI. I would have gotten to the answer much sooner, perhaps without having to learn the hard way.”

Where they are now

After the changes, Citrix recruiters started crafting better InMails and the acceptance rate is now steady at about 25%, up from 10-12%. Those recruiters with seats also started spending a greater proportion of their time using the platform productively, rather than just logging in idly.