2 Tales of Horror from the Recruiting World

It is this special time of the year when scary stories are the tastiest treat on the menu. To oblige, we selected tales from an unsuspecting candidate and a recruiter who found themselves starring in their own horror films.

I had 45 minutes to make the 8 a.m. meeting at my staffing agency and an hour left in my LA commute.

Looking in the rearview mirror, I realized glitter from the masquerade mask was still embedded in my eyebrows. The gigantic bags under my eyes would surely distract anyone from noticing. It was the day after Halloween, after all.

I walked in just as the meeting assembled. The door swung open and the SVP entered with his usual expression, a mix of disdain and a perky smirk. Stella (my boss) sat down without looking at me (or anyone).

The SVP cleared his throat and boomed, “Let’s get started.”

His sincerity told me something was wrong. He launched into a spiel about how we’d brought “ABC Staffing” into the new millennium. Then:

“They have a suite in this building, so we can expect some consolidation,” my boss added like a Vulcan, emotionless.

After four years and clawing my way to the middle, I was comfortable and happy…for the most part. I wasn’t ready for this. I just leased a big apartment and bought a car.

“We specialize in a niche GGS wants to grow. No guarantees, but we don’t have reason to be too concerned,” Stella continued.

Then: “But we all will interview for our jobs, and they will entertain external candidates.”

I began mentally drafting my resume. I was pretty decent at my job and had great references, but I was petrified.

Shortly after, Stella invited me for a walk. She tried to sound casual, but she’d call a cab to the front door if her parking spot was too far from the building. I knew we were not going for a walk.

I tried to remember what unemployment pays as I rode the elevator to my doom. But to my surprise, we headed up to the penthouse.

Stella passed the GGS receptionist with a nod, as though she been there a hundred times. I realized she helped coordinate the whole thing. I made a mental note to never play poker with Stella.

The conference-room door flew open and an unnamed manager joined us. He blinded me with a hideously rehearsed smile and said, without introducing himself: “We’re doing interviews today so we get a genuine glimpse into who you are, and if you’re the right material for GGS.”

I tamped down a wave of nausea. He produced my resume. I lost it.

“Before we launch into an interview that I’m woefully unprepared for, how about I know who you are and your role here?”

He looked at Stella, then at me. He apologized and introduced himself, explaining he thought Stella might have told me.

“You said not to say anything.” Stella said, unapologetically.

I decided to be honest but professional. Questions leveled at me like mortar fire and I rolled with it, stopping only to drink most of the 5-gallon jug from the water cooler.

As we said goodbye, he remarked, “You know you have glitter on your face?”

Eight days after the surprise interview, my phone rang. I got Stella’s job. Stella got the SVP’s. The SVP would remain as a “consultant” during the transition.

What’s the moral of the story?

I don’t know. All I know is that it was scariest November 1 this recruiter ever had.

Laura Byrne, Owner, Penguin Prose, tells of an interview that started swimmingly, but ended with her achieving near invisibility. Laura, do you see dead people?

Flash back to a decade ago: the 2000s, the naughts, the new millennium.

A recruiter for a global firm arranged an interview for me in their New York office. Thrilled, I sprang into action: the black skirt-suit got the nod, and multiple copies of my resume were produced on creamy, hefty watermarked paper (which all seems so very last century now).

I arrived 15 minutes early, feeling prepared, thinking, “Let’s do this!”

The first employee I interviewed with was lovely and professional. I left the conversation feeling reasonably good about the impression I’d made.

I was also feeling warm and fuzzy about the company. Sharp minds, I thought. A creative environment. Amazing location. I could see myself working there. It was a bit like walking through the pre-constructed room scenarios in IKEA, and imagining yourself cooking Thanksgiving dinner in one of the streamlined, Scandinavian-chic kitchens.

Next up was an interview with a vice president, the level just above my position at the time. I was told he was running late from a meeting, and could I wait? I said  -- like any sane candidate, and in the heady throes of first love with this company – of course I would.

Then the script shifted, from romance to horror.

I’m not sure what was worse - the waiting, or the sense that I’d been abandoned. Somewhere between 1½ and 2 hours later, my second interviewer arrived. Lunch in hand. Clearly not happy to see me.

I managed to extricate myself from the sofa on which I’d spent the better part of an afternoon waiting. He led me into his office, sat down behind his desk and proceeded to … multitask.

Took a bite of lunch… tapped away at his emails… and threw out the occasional question, my answers to which seemed not to interest him in the slightest. Perhaps four questions total, if I remember correctly.

He dismissed me after barely 10 minutes. I thanked the receptionist and headed home, drained and defeated.

To add insult to injury, after I dutifully sent thank-you letters and emails, I never heard from anyone in HR. No next steps, no polite decline... nothing.

While I can laugh about the horror of it now, at the time I was devastated, and felt less than respected. 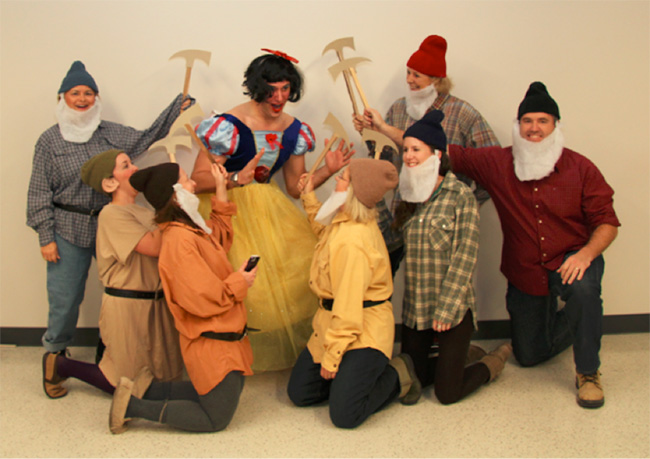