Why Did Zappos Ditch Its Job Postings, and is the Strategy Working? 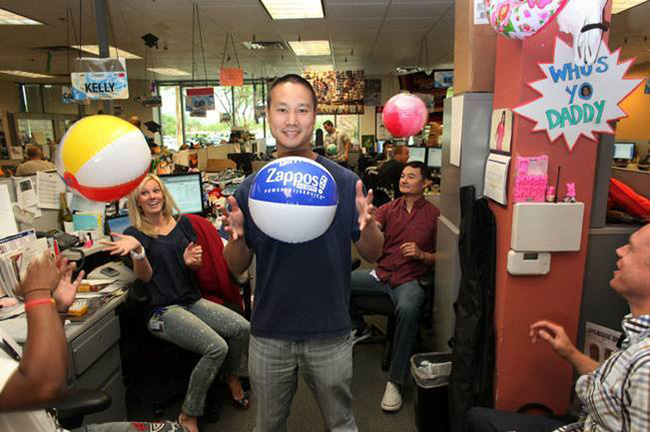 “Take a long time to hire and a short time to fire. Most companies do it the other way around.” – Tony Hsieh, Zappos CEO

You probably heard the buzz about Zappos last May when the company announced it was getting rid of job postings. Media outlets from The Wall Street Journal to The Washington Post to Harvard Business Review covered the news, and Zappos’ relationship-based Insiders program was in the spotlight overnight.

Stacy Donovan Zapar and Mike Bailen took the stage at Talent Connect San Francisco to set the record straight about why they launched the program, what it is and how it works, and most importantly and for the first time, to share results.

They have accomplished a dizzying amount over the past year. Here’s a summary of their presentation so you can think about what parts make sense for your business. You can watch the full video here.

In 2013, Zappos received 31,000 applications yet only made 350 new hires. That means they sent out 30,650 rejection letters. Big problem, says Bailen, because that resulted in:

Out with the old, in with the new

Instead of trying to fix the broken process, Zappos decided to ditch it entirely and launch the Zappos Insider program.

The new program focuses on developing long-term relationships with prospects. The intent is to keep conversations exploratory for as long as needed so that both sides get to know each other.

“Since the call-to-action is to become an Insider vs. applying for a specific opening, we capture more people with a variety of skill sets that we can pipeline for current or future openings,” says Bailen.

The company did indeed get rid of most job postings on its website. “Job postings were a distraction,” explains Zapar. “They caused people to only talk about that one specific req so that once that req was filled, those who weren’t hired ended up lost.”

The main goals of the Zappos Insider program were to have:

How to become a Zappos Insider 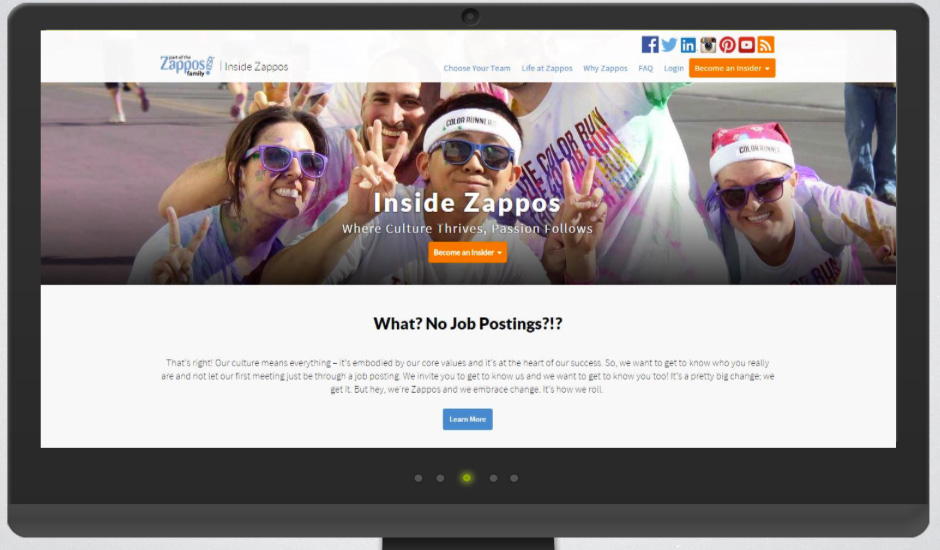 Instead they are introduced to the various teams at Zappos, and are asked to choose the one that is most applicable to their skills and interests. 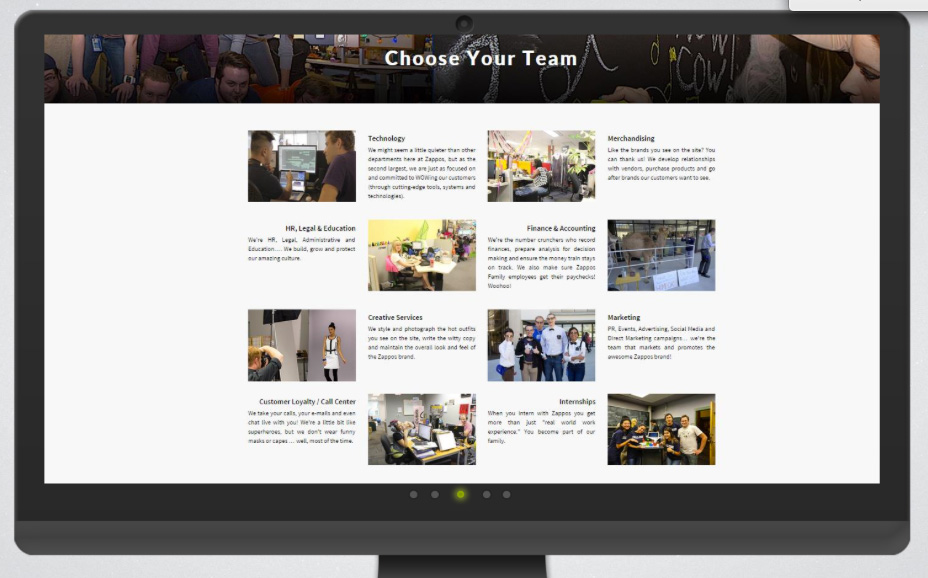 Step 2. Visitors then upload their resume or join with LinkedIn, Facebook, or an email address. 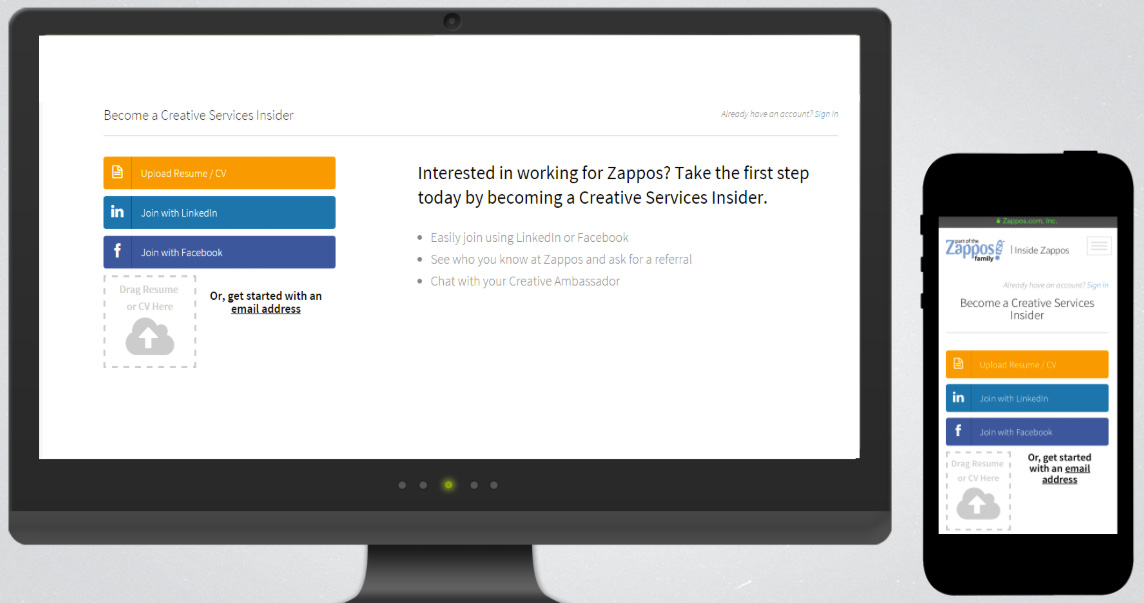 Step 3. Finally, they are asked to fill out a few questions (5-10 minutes) relating to logistics and culture. For example, one question is, “What’s something weird that makes you happy?” Every single Insider is assigned an ambassador, one of Zappos’ six recruiters. Yes, the company only has six recruiters! 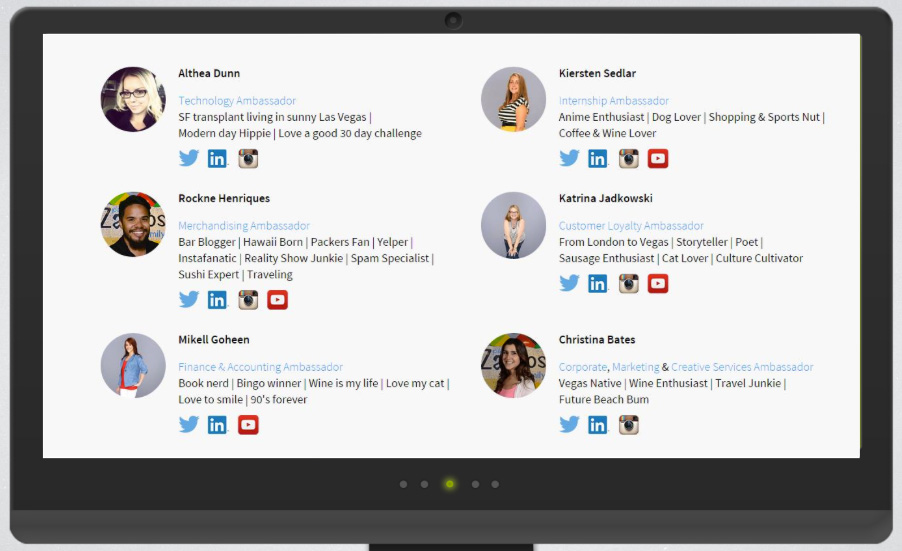 Key strategies and tactics of the Zappos Insider program

“Everything is built around the concept of engagement,” says Zapar.

“Whether or not you have a program like ours, these are all actionable, low-budget ways to build relationships with candidates,” she adds.

Here are the building blocks contributing to the program’s success:

“The #1 thing we did pre-launch was set up the social infrastructure so that we could start two-way communication with candidates, and present a cohesive Inside Zappos brand across channels. This included establishing our presence on Twitter, Facebook, Instagram, LinkedIn, Pinterest and Google+.”

“Instead of hiring a social media guru, each recruiter runs Inside Zappos for a week at a time,” explains Zapar. “Recruiting coordinators and even interns are included in the rotation. No one pre-approves the content: we let them have their own voice and represent Zappos in a unique way.”

“Some people even share when they are having a bad day,” adds Bailen. “It’s not just the good stuff; we’re real,” he says.

Recruiters have started telling their stories on the Zappos blog. This helps candidates get to know them before reaching out. 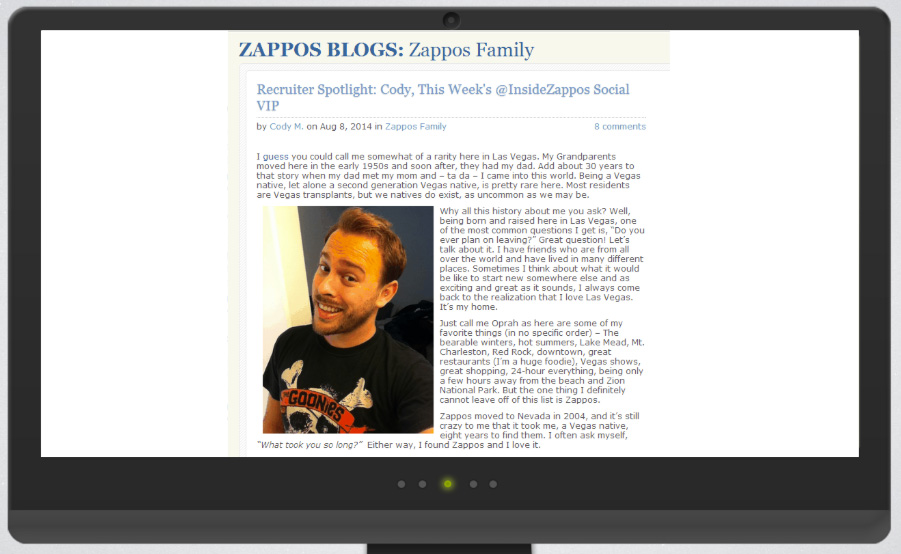 Biweekly  #InsideZappos Tweetchats are held on Thursdays at 1pm ET / 10am PT. It’s a great way to meet Zappos employees around the company (not just recruiters) and gain insights and personal impressions about life at Zappos. Insiders can ask questions and share their thoughts.

These are like video conference calls, targeted to specific audiences such as technical talent. For example, recently several tech managers joined the tech recruiter to answer questions about life at Zappos from a techie point of view. 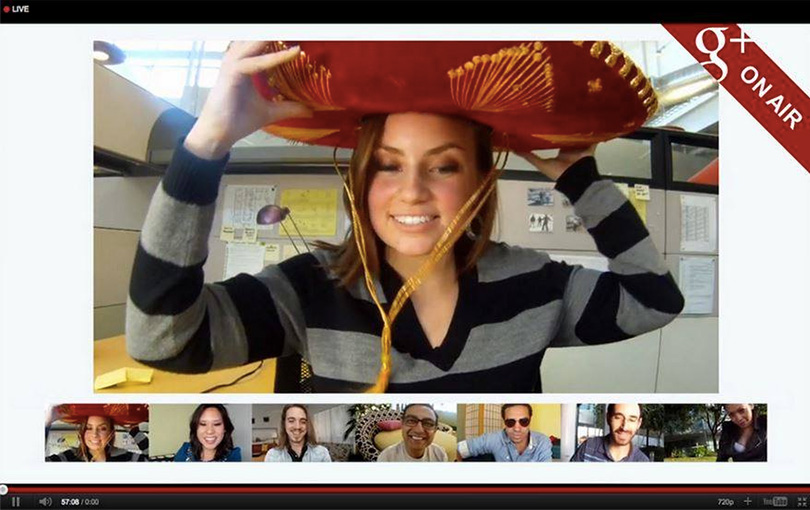 In order to reach candidates with very specific skill sets, Zappos invests in targeted ads on Facebook, LinkedIn and Twitter.

The tool is Ascendify, where recruiters do things such as engage talent, tag profiles, and watch video cover letters. It’s important to note the company still has reqs, job descriptions and an ATS on the back end. 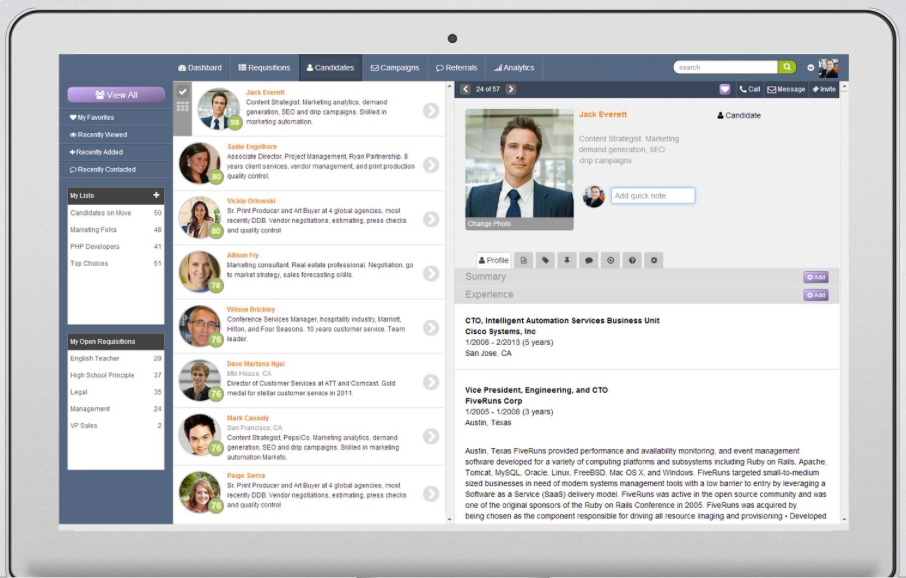 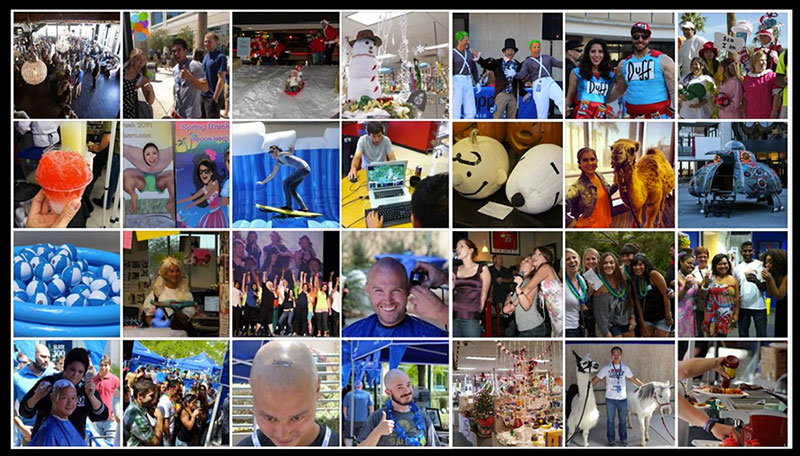 Zappos helps Insiders build skills by hosting webinars on such topics as networking and job searching. A recent one covered “Five things job-seekers need to know about LinkedIn” and the next one is “How to write a video cover letter.”

The company hosted an ice cream social for 350 Insiders at its Vegas headquarters. It was a low-budget way to get to know one another in a casual and fun environment. 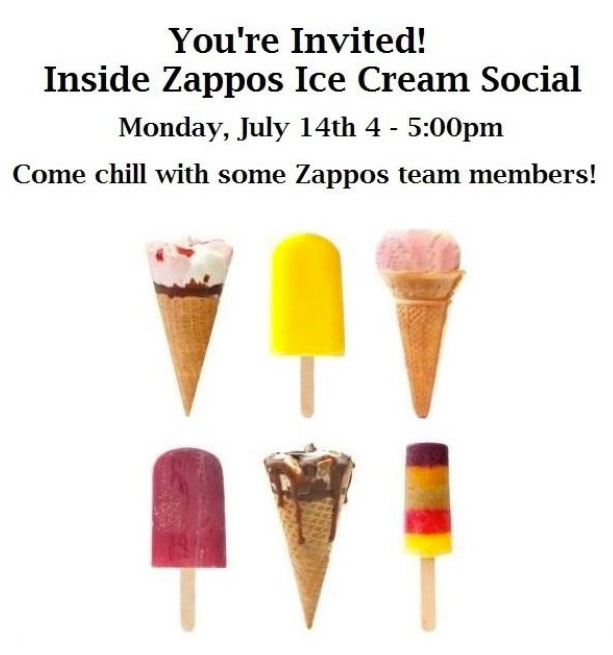 Zappos hosted an internal recruiting event to drive awareness among employees about the program, helping to develop more brand ambassadors. 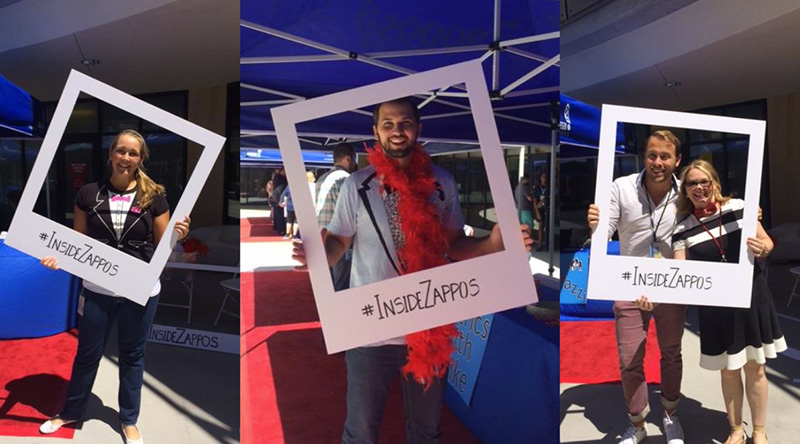 Insiders can’t communicate with other Insiders on the platform, so it’s not a talent community per se. But through social channels there has been a great deal of relationship building amongst Insiders, such as organizing meetups via Twitter.

“All of our results are trending as good or better than anticipated,” reports Bailen.

In addition to the quantifiable results:

You don’t have to get rid of job postings to see Zappos-like results. Think about which of the company’s many tactics could work for your organization.

“At the end of the day, it’s about candidate engagement,” says Zapar. “Try something new. Take risks. You might just be surprised at what you’ll achieve.”