The 25 Hottest Professional Skills of 2014

It’s almost a wrap for 2014 and it’s safe to say that it’s been a busy year for both recruiters and candidates. Hiring has been so hot that unemployment is hovering down at pre-recession levels.

The best part of ending a year, of course, is sitting down to think through what has happened and how it will reflect on the upcoming 2015.

In that spirit, we thought it would be interesting for both recruiters and candidates to see what were the hottest professional skills on LinkedIn in 2014 – or put in other words, what skills got people hired and kept recruiters searching this past year.

After analyzing the data in over 330 million LinkedIn member profiles, here are the 25 hottest skills globally: 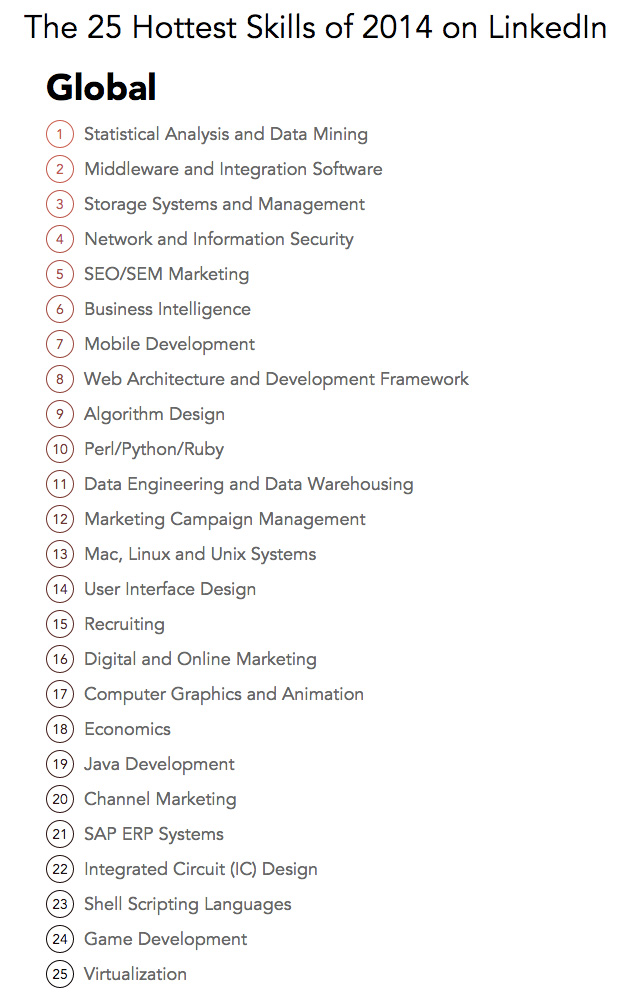 And here is the country-by-country breakdown:

The 25 Hottest Skills of 2014 on Linkedin from LinkedIn

When we looked at the data, a few trends emerged:

This data is part of our effort to map out the Economic Graph, a digital representation of the global economy.

Thanks to Sohan Murthy, Peter Rigano, and Skye Riley for gathering, analyzing and visualizing the data.

Methodological details: The results of this analysis represent the world seen through the lens of LinkedIn data. As such, it is influenced by how members choose to use the site, which can vary based on professional, social, and regional culture, as well as overall site availability and accessibility. These variances were not accounted for in the analysis.
Because there are thousands of individual skills (and growing!) that members can put on their profile, our first step was to group these skills into several dozen categories. For example, skills like “Android” and “iOS” would fit under the “Mobile Development” category. From there, we looked at all of the hiring and recruiting activity that happened on LinkedIn in the past year (January 1 to December 1, 2014), and identified the skill categories that belonged to members who were more likely to start new jobs and receive interest from recruiters.