If you respect resilience, then take a moment to admire the current oil & energy job market.

Workers in oil & energy seem justified in bracing for a difficult 2015. The spot price of oil has been declining since summer 2014. In January, it dropped below $50/barrel for the first time since 2009.

LinkedIn hosts over 4 million professionals in the oil & energy industry worldwide. As you can imagine, we wondered if their job activity would reflect the sour mood of the markets. What we found instead are several signs of a strong stand against sliding prices:

LinkedIn data shows that oil & energy employment grew by 0.6% in 2014, meaning slightly more people joined the industry than left it over the course of the year. Growth continued even between October 2014 and January 2015, the period when declining oil prices became daily news. However, fourth quarter growth was not evenly distributed across the globe. Employment increased in North America and the Middle East, but declined in most of Europe.

We found that when the going gets tough, the tough…well, apparently, they stay put. The proportion of oil & energy professionals on LinkedIn who viewed jobs did not change significantly over the last year. More job viewers applied to jobs, but oil & energy was consistently the most popular industry among applicants.

This popularity only shifted in January 2015, when slightly more applicants favored jobs in energy consulting rather than working directly in oil & energy companies. 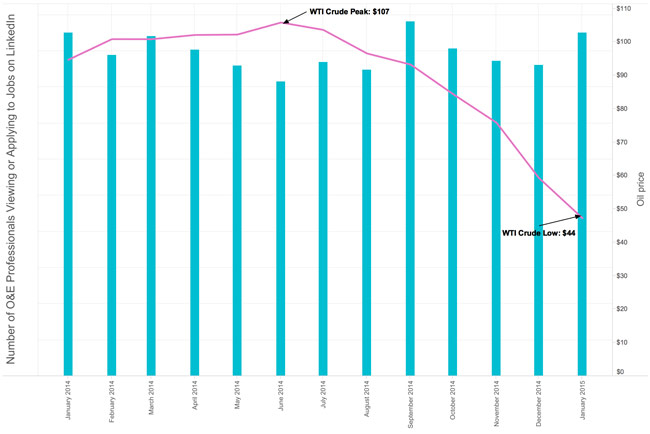 Oil & energy employers are maintaining a positive outlook for 2015

After a brief decline in recruiting activity in November and December - a slow recruiting season across most sectors - oil & energy recruiters had a busy start to the year. In fact, recruiters reached out to as many potential candidates in January 2015 as they did in June, when oil prices were at their 2014 peak.

Why the hustle? This past month saw an average of 21,000 oil & energy jobs open on LinkedIn each day, most of them in management, engineering and sales.

While there is no consensus on if and when oil will return to triple digit figures, there's good reason to believe that oil & energy companies are well equipped to ride out the price slump this year.

Methodological disclaimer: The results of this analysis represent the world seen through the lens of LinkedIn data. As such, it is influenced by how members choose to use the site, which can vary based on professional, social, and regional culture, as well as overall site availability and accessibility. These variances were not accounted for in the analysis.

*Image by Kool Cats Photography over