How Ogilvy & Mather Made a Clutch Hire in 45 Minutes

It was Thursday afternoon. Nando Rodriguez, Head of Employment Branding for North America at Ogilvy & Mather Advertising, got a phone call from a hiring manager who headed up social media in New York. Her request: his help filling a job by Monday.

After recovering from the shock of the tight deadline, Rodriguez got to work. First off, he posted a job description on their site. He then tweeted: “New Social Strategist role at #Ogilvy – send @NandoRecruit your LinkedIn profile ASAP! #OgilvyCareers,” and included a link to the job.

Next, he asked the hiring manager, who happened to be one of his influencers (someone at Ogilvy who has social leverage and is willing to help share content) to retweet him right away. 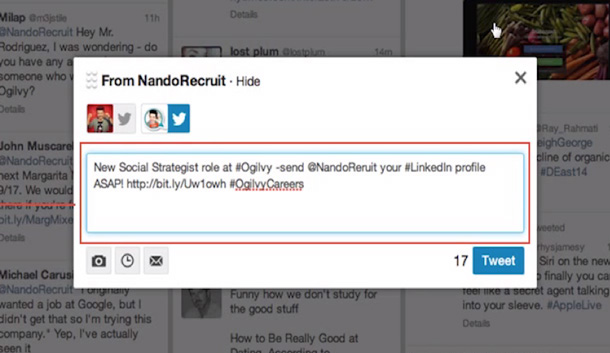 The result? Twenty applicants within ten minutes. By 5 p.m., they had spoken to five and narrowed the field to three. Friday morning, they made the hire.

According to Rodriquez, this improbable scenario was made highly possible thanks to their investment in company - as well as their own – social media presence and engagement. By following his five steps below,  Rodriquez insists that you can make this happen at your company too.

Using visuals to communicate your employer brand on either your company or personal social channels will help capture people’s attention and build engagement, Rodriguez says.

For example, Ogilvy employees treasure their “Ogilvyisms” – quotes from their founder that have become ingrained in their company culture – like, “if you hire people that are bigger than you, we shall become a company of giants.” So, Rodriguez worked with a copywriter to create a colorful job description featuring a huge green arm, inviting prospects to “activate their inner giant.” 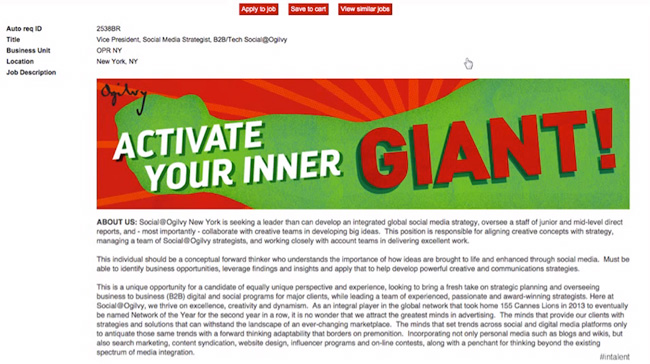 Rodriguez has creative talent at his disposal at Ogilvy, but that doesn’t mean other recruiters can’t do the same thing. Tap into the creativity in your company, he says. If you ask, you can find people who are into Photoshop, for example, or who know something about design.

Rodriguez created another visual piece using some Ogilvyisms and images of their employees, as research indicates that if a candidate can see him- or herself at the job, they’ll apply, he says. 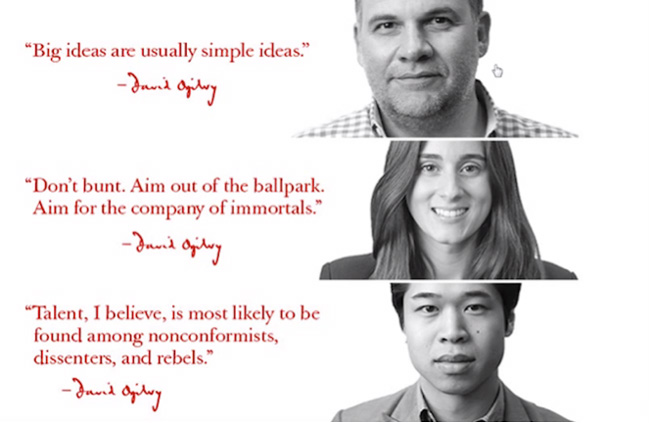 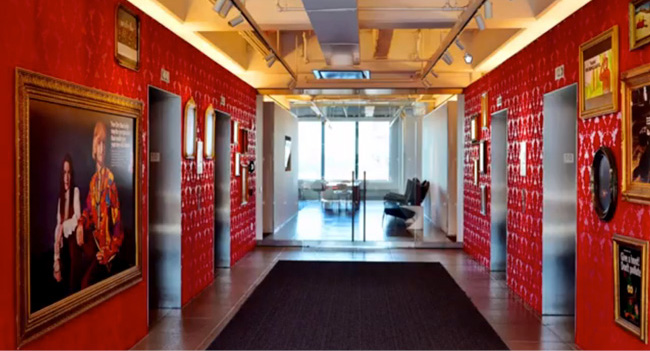 In the end, Rodriguez says, it’s about finding what would motivate people to click and want to come work for you.

2. Use social media to engage, not to make announcements.

Rodriguez adheres to a 4:1 ratio on Twitter: for every four tweets commenting on the weather or sharing other people’s content, he gets to tweet out a job description from @NandoRecruit.

“If you become that noisy person on Twitter, you’re going to get tuned out,” he warns. The same goes for your company Twitter handle and other social outlets.

But, if you or some of the other recruiters on the team aren’t comfortable with social media, he says, don’t push it. Find someone who is, then start creating content and have them help push it out to ensure success.

3. Include a social call to action in your company’s job posts.

Small things can have a big impact. Rodriguez recommends including a hyperlinked call to action at the bottom of your job descriptions, like, “please contact Jessica on LinkedIn once you’ve applied and let her know you’re interested.” 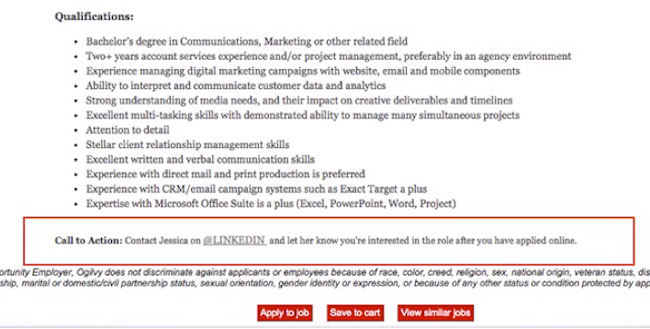 This basic step connects the dots to help candidates maneuver through the process. Doing just this one thing increased Rodriguez’s social engagement by 43%, he says, and was a big factor in their ability to make that 45-minute hire happen.

4. Stay top of mind by liking, posting, and sharing on social.

Another way to raise your equity on social, Rodriguez says, is to become an authority in whatever field you’re recruiting in and start sharing content on your personal and/or company channels. This could be things like relevant articles from trade or business publications or a favorite blog.

Why? Because when you do, it rises to the top of your contacts’ social feeds. That means that when they log on, they’ll be more likely to see your content and start veiwing you as a expert in the field.

5. Leverage your social influencers at your company.

Remember, when it comes to social media, you don’t have to go it alone. Take advantage of the influential people at your company, Rodriguez advises, like the manager who requested the quick-turnaround hire.

During staff meetings, or when you meet with hiring managers, ask who the top influencers are. When you incorporate influencers into your recruiting process, Rodriguez says, you’ll quickly find they’re key to pushing out content.