The Best Recruiting Lines of All Time

Based on a Quora thread: What are the greatest recruiting lines ever?

First off, we have no doubt that any line you use when you call up a prospect is the best recruiting line of all time. However, every now and again brilliant leaders manage to sell the opportunity of working for them in a way that lights a fire in the hearts and minds of recruits.

Here are few of the best:

“Don’t be an idiot. Get on a rocket ship. When companies are growing quickly and they are having a lot of impact, careers take care of themselves. And when companies aren’t growing quickly or their missions don’t matter as much, that’s when stagnation and politics come in. If you’re offered a seat on a rocket ship, don’t ask what seat. Just get on.”

2. Ernest Shackleton's 1907 ad in the London's Times, recruiting a crew to sail with him on his exploration of the South Pole:

And here is what the job ad looked like: 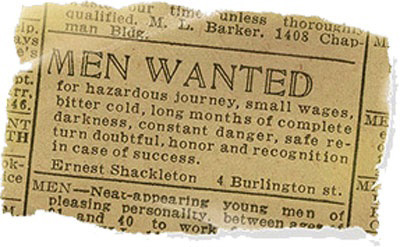 3. CEO of Motive Communications to an engineer who turned down a job offer:

A hot-shot engineer from Dallas turned down an offer at Austin-based Motive Communications. When the CEO Mike Maples heard that he personally called the candidate to find out why. The conversation went something like this:

"Do you live closer to Dallas-Fort Worth or Love Field? Because I need to fly up and apologize to you.

"You see, we have something amazing going on here and clearly we didn't communicate the amount of awesome we are going to unleash on the world in the near future ... so I want to apologize to you for that.

"Also, only rock stars get offers from us, so you must be a rock star. I don't ever want another rock star to turn us down, so I need to understand how we failed to explain to you what is going on here.

"I can’t offer you money, position or fame. The first two you have; the last, from the place you now occupy, you will no doubt achieve.  These things I now ask you to give up, I offer you in their place: work—hard, hard work—the task of bringing a people from degradation, poverty, and waste to full manhood."

5. The Marines at a high school assembly:

A Marine recruiter took the stage in front of a high school assembly after the other service recruiters had given long-winded speeches about why the students should join their respective branches.

The Marine recruiter simply looked out over the audience for a few seconds and said:

"I don't think I see anyone in this room that has what it takes to be a United States Marine. But if any of you think you can prove me wrong, I'll be at that table over there."

The Marines got more recruits that day than all other branches combined.

6. Marc Zuckerberg to his recruits in the early days of Facebook, as told by the New York Times:

"When Facebook was headquartered in Palo Alto, Mr. Zuckerberg often took high-level new recruits on hikes along the wooded trails near his offices.

Several people who were hired this way say the strolls usually meandered along the trail — with Mr. Zuckerberg asking questions of the new recruit along the way — and ended atop a lookout. There, Mr. Zuckerberg would explain the terrain in front of them and his vision for the future.

“He pointed out Apple’s headquarters, then Hewlett-Packard and a number of other big tech companies,” one person who was recruited by Mr. Zuckerberg told The New York Times last year. “Then he pointed to Facebook and said that it would eventually be bigger than all of the companies he had just mentioned, and that if I joined the company, I could be a part of it all.”

"Do you want to sell sugared water for the rest of your life? Or do you want to come with me and change the world?"

What have you got up your sleeve?