One Startup’s Approach To Fixing The Women-in-Tech Gap: Discouraging the Word “Guys”

It’s hard to deny that tech has a gender problem. Leading companies like Google, Apple and, yes, even LinkedIn have far more men working in tech jobs than women, a phenomenon that persists throughout the industry.

Researchers have determined this is largely because women pursue careers in computer science at a far lower rate than men. Some argue that’s because the alleged male-centric atmosphere within the tech community discourages females. 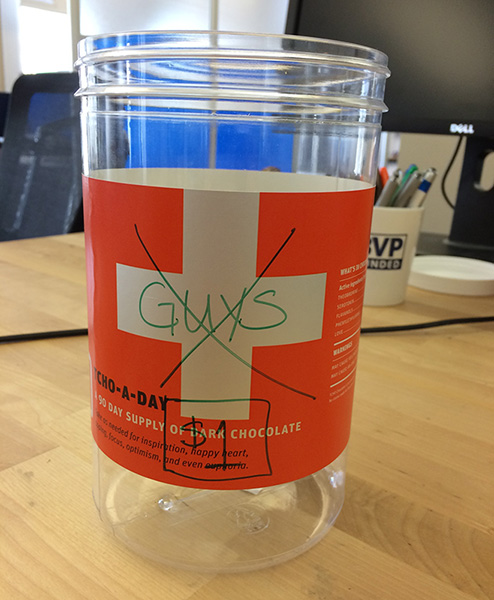 Well, tech startup npm is looking to change all that by discouraging one word, at least in some contexts – “guys.” On the company’s blog, npm co-founder Laurie Voss said if anyone at the company uses the word “guys” when referring to a group of both men and women, they can – if they choose – put money into the “Guys Jar”.

“But the idea is: if you believe that using the word ‘guys’ to describe a mixed-gender group of individuals is creeping sexism, and are trying to eliminate that word from your casual use, you put a dollar in the jar every time you do it accidentally,” Voss wrote. “At npm participation in the Guys Jar is totally voluntary, but a lot of us do it, and we tend to put a dollar in whenever we accidentally gender something gender-neutral or misgender somebody.”

Once the money in the Guys Jar totals $50, it gets donated to a charity, the first being Girls Who Code. Voss writes he didn’t come up with the idea, just that he thinks it’s a good one.

Who did come up with the idea? Apparently, it’s been floating around since at least 2002, as evident by this paper by UNC professor Sherryl Kleiman. And here’s a 2012 interview with Alice Walker, author of The Color Purple, talking about this very issue:

Since announcing his decision, media outlet Vox came out in support of the decision. Additionally, Voss has continued to point out other examples of “creeping sexism” on his Twitter page, as seen here:

One of the best engineers I know mentioned this week that she can't dress the way she wants because male devs wouldn't take her seriously.

Does npm’s stance make sense and do you think it will help them recruit women software engineers? Or does it go to far? Tweet us your opinion at @HireOnLinkedIn.

* images by Fe Ilya and npm