Op-ed: Money is Important, and 3 Other Things Your Mom Tried to Tell You

LinkedIn released their annual 2015 Talent Trends report recently and one thing that jumped off the report is a finding about what candidates believe to be the most important reason they, ultimately, decide to accept a job. Guess what it is? Betcha can’t!

The LinkedIn survey showed that 49% of candidates said that ‘better’ compensation is the number one reason they would accept a new job. This more than doubles the second and third place reasons of Culture (21%) and More Influence (14%). 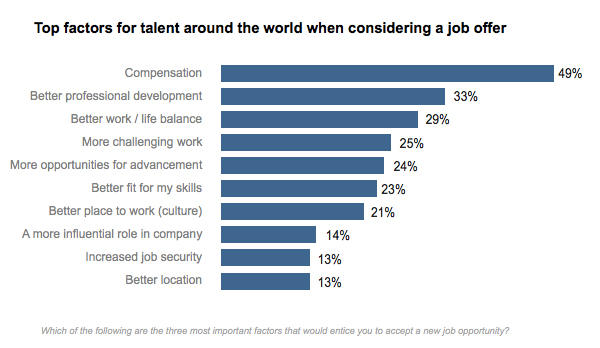 But, wait! Haven’t we been told for about a hundred years that people don’t care about money when looking for new job? It’s way down on the list. Especially, for all those new millennials who are taking over. They don’t even want to be paid! So, why now? Why is money now so important?

I would argue that money always has been the reason people would accept a new position. I’m a firm believer in everyone has a price. Everyone. I could get President Obama to quit the White House if I just had enough budget.

I’ll also argue that an entire generation of millennials grew up during a major recession. Having money is better than not having money. Recessions suck. Recessions also create an environment where money becomes important.

What else did the LinkedIn survey teach us, that our mothers probably taught us as well, but we didn’t want to listen to at the time?

What can you learn from all this?

The recession changed a ton of stuff. Much of what we thought about millennials during the recession is quickly changing as they get fully entrenched in the workforce.

We can’t attract and ‘manage’ talent today like we did ten years ago, it doesn’t work. Candidates want information quickly, and if you hold out, they’ll just move on. We need to communicate with candidates like they want to communicate, not like we’d like to communicate.

If you’re still only recruiting for your current open positions, you are failing at recruiting. We need to be able to recruit just-in-time candidates, but we also, simultaneously, need to be recruiting candidates we will be hiring a year from now.

Check out the report it has some great data.

*Image from The Wolf of Wallstreet