It’s a been a sad deterioration for the two pop icons’ relationship from best friends to frenemies to outright enemies, marked by Perry’s cataclysmic tweet comparing Swift to the most hated character in the movie Mean Girls:

Watch out for the Regina George in sheep's clothing...

Whoa, the Regina George bomb. Hard to recover from that.

So what’s the cause of all this? Did Swift wear the same thing Perry wore? (Unlikely). Is it over a boy? (Sort of, but not fully.) The fact of the matter is, the driving force of the breakup is talent acquisition, or in Swift’s case, perhaps lack thereof.

Believe it or not, Perry and Swift used to be friends. Here’s the photo evidence from the 2010 Grammys: 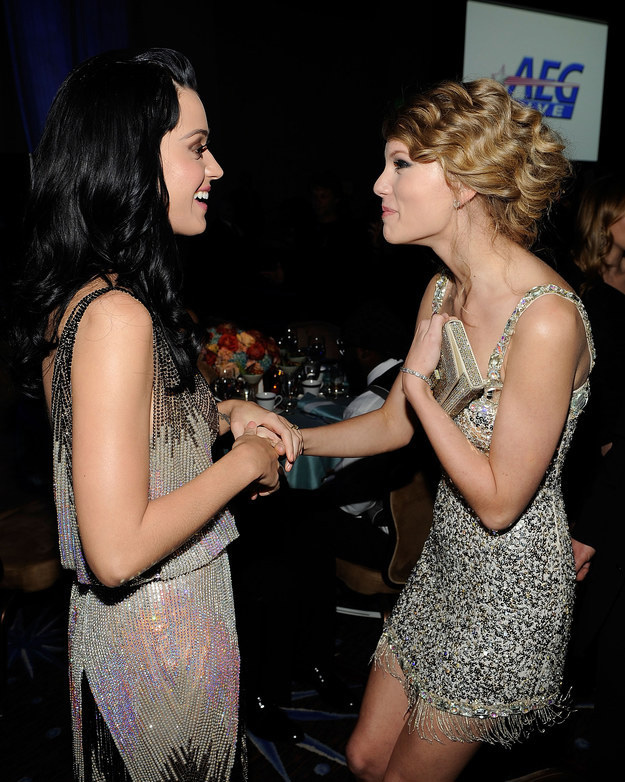 They even threw bouquets to each other on Twitter:

@taylorswift13 You're as sweet as pie! Let's write a song together about the subject we know best... for my new record. It'll be brilliant~

Seems like nothing could destroy this perfect relationship between two beautiful and talented pop icons, right? Well, nothing but recruiting (helped by some lackluster attention to company culture).

How it all fell apart

Okay, I’d be remiss not to mention that Perry began dating singer John Mayer in 2012, who previously had dated Swift. While I’m sure that didn’t help their relationship, it wasn’t what tore it apart.

No, when it really fell apart is when Perry implemented a classic hire-to-hurt strategy in 2013 by hiring away three of Swift’s backup dancers – in the middle of one of Swift’s tours! In a 2014 interview with Rolling Stone, Swift said a female pop star she didn’t want to name (ahem Perry cough cough) “crossed the line” the previous year with her shady business moves.

“She basically tried to sabotage an entire arena tour,” Swift told Rolling Stone. “She tried to hire a bunch of people out from under me. And I'm surprisingly non-confrontational – you would not believe how much I hate conflict. So now I have to avoid her. It's awkward, and I don't like it.”

What’s interesting is why the backup dancers left Swift’s tour for Perry’s. Lockhart Brownlie, one of the dancers who left, told The Examiner that Swift was “untouchable,” “a lot more protected than Katy” and didn’t give them a chance to shine.

“We weren’t really dancing in Taylor’s tour anyway so I got a little bored and I really wanted to do (Perry’s) promo tour,” Brownlie told The Examiner.

Since, the feud has only intensified, with the singers exchanging a barrage of veiled and not-so-veiled shots at each other. And all because of Perry’s recruiting tactics.

The lesson for talent acquisition/HR

As ridiculous as the whole story is, there are some actual lessons for talent acquisition and HR professionals here. First and foremost, it’s that top talent isn’t going to be happy if the company’s leader barely interacts with them or gives them little to do.

Brownlie, for example, felt unappreciated as Swift’s backup dancer and was eager to return to Perry, who he felt showcased his talents more. And he was right, as Brownlie briefly made international headlines as one of Perry’s dancing sharks at the 2015 Super Bowl.

Secondly, Perry’s move puts a spotlight on the “hire-to-hurt” philosophy, i.e. the concept that you hire your rival’s best people not only to help you but to hurt them. It’s a philosophy William Randolph Hearst – the famed newspaper baron – made famous, when he hired away the three top editors from rival Joseph Pulitzer’s newspaper during the height of Yellow Journalism in the late 1800s.

Is hire-to-hurt a good idea? Debatable, it has its short-term benefits I suppose, but it probably isn’t the best karma.

What if another company does it to you and steals some of your best people? Your best move is looking at your own company’s culture to see how you can improve that.

Oh, and whatever you do, don’t get angry. Just shake it off.