Workers have so much competition today, and not just from an ever-increasing talent pool in today’s global economy. There’s also the very real threat their jobs might be replaced by a machine.

So what are the jobs that are least likely to be replaced by new technologies in the next twenty years, and what are the most? Well, The Economist recently published a study that looked into that exact issue, and here’s what it found (hint: it’s good news for dentists and recreational therapists, and bad news for telemarketers): 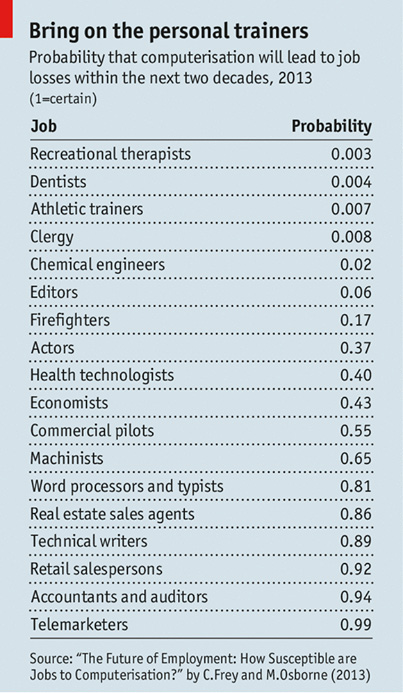 This is valuable information, particularly for recruiters. After all, if you are recruiting for telemarketers, and there’s almost a 100 percent chance that job won’t exist anymore in twenty years, than it’s time to start thinking about the next jobs you’ll be recruiting for.

Bigger picture, it’s just a reminder to recruit for not just the skills a position requires today, but the skills it’ll require in the future. After all, if you are only bringing on people who can do roles that will eventually go away, there’s a good chance your position will go away, too.