From Order-Taker to Talent Expert: How Talent Connect Transformed a Recruiting Leader’s Career

In the past year, Equinix has seen a more than 50 percent increase in career page views and 84 percent more applicants. They are beginning to see positive results in decreasing time-to-hire as well. The company’s investments into its talent brand have shown an 80 percent larger ROI.

And, finally, they on track to spend about $2 million less on third-party recruiting agencies this year, when compared to last. Why?

Well, if you ask Equinix Vice President of Global Talent Management Larry McAlister, it really comes down to two words: Talent Connect. Two years ago, he attended the conference for the first time in Las Vegas, and it forever changed the way he did business.

“It gave me this ‘a-ha’ moment to completely change the way I approach recruiting,” McAlister said. “It meant death to the recruiter as an order taker. Death to starting every job with a job description. And even eliminating the word recruiting all-together and replacing it with talent acquisition expert.”

He illustrated his realization with an apt metaphor – fishing. Before he went to the conference, he saw recruiters as in a boat, alone in the water, trying to catch whatever fish the hiring manager shouted to them from the shore, no matter how unrealistic.

Since, he’s moved to the recruiter and the hiring manager both in the boat, working together to find the best fish possible. The next step, he said, is to get the fish to actually jump in the boat themselves.

“That’s the end goal,” McAlister said in an interview with LinkedIn. “We aren’t there yet, but we are getting closer.”

Going from recruiter to talent partner and marketer

In the ten years before he went to Talent Connect, McAlister saw all the innovations in talent acquisition as just a way for recruiters to become more efficient at meeting the demands of hiring managers. ATSs made organizing easier, email made contacting talent easier, job boards made sourcing talent easier; but it was all just making the same system faster.

“We were just getting better at that one core function,” he said.

But two years ago, when he attended Talent Connect in Las Vegas, he saw a new way to do business. Speakers there were talking about things like building up an employer brand, so great talent comes to you, and working with hiring managers – instead of for them – using talent pool analytics.

“It was new to me,” McAlister said. “It was a completely different way of looking at things.”

Fortunately, McAlister brought most of his recruiters to the conference, so the team learned this new approach together. When they got back to their jobs three days later, they began to do things differently.

When he saw Talent Connect in Las Vegas, McAlister was working for Glu Mobile, a cell phone gaming company. A little over a year ago, he switched to his current job at Equinix, and took his lessons from Talent Connect with him.

He dedicated specific resources to building Equinix’s first talent brand team, in order to begin promoting the company’s employer brand. This included building a strong partnership with Marketing to begin weaving talent-focused content in with company updates and news on the Equinix LinkedIn Careers Page:

The talent brand team also partnered with Marketing to share and promote videos highlighting some of their workers. Here’s one about one of Equinix’s longest-tenured employees, Jay Jones:

Largely because of all this brand building, Equinix has gone from chasing prospects to prospects coming to them. In the past year, more than 3,300 people applied for 395 jobs at the company, an 84 percent increase from the year before, McAlister said.

Still, for some harder-to-fill engineering positions, passive recruiting is still required. Again, by using a lesson he learned at Talent Connect – going after people who have a connection to the company – and all that brand building, it’s gotten easier, McAlister said.

“Now, the prospects are a lot warmer when we contact them,” McAlister said. “Instead of having to spend five minutes explaining who we are to a prospect, they know who we are, and we are having more meaningful conversations with them.”

The next stage is to get employees to start becoming more active on social media, and work as de facto talent ambassadors, he said. He’s even planning on holding a contest to see who can rack up the most profile views on LinkedIn.

“What we are trying to do is get more people to create their own organic content, and that’s how you build awareness exponentially,” McAlister said.

One of the biggest lessons McAlister learned at Talent Connect was to stop seeing himself and his team as order takers for hiring managers. Instead, they should see themselves as talent experts, who partner with hiring managers and use data to advise on the talent landscape and make informed recommendations accordingly. Specifically, that means each recruiter meeting with the hiring manager at the beginning of each search and using LinkedIn’s talent pool analytics to agree on a realistic target.

So, say a hiring manager wants to hire a software engineer. Before, he might have said he wanted someone locally, with 10 years experience and a master’s degree and send the recruiter on his way.

Now, the recruiter can pull up the talent pool via a LinkedIn Boolean search, and show the hiring manager that there are a very limited number of people in the area who meet those requirements, and they are all employed at prestigious organizations. From there, the hiring manager would be able to say that he wants to remove one of the required skills or open the position up to relocation in order to identify a truly amazing candidate.

Or, he could adjust the level of the position or specific education requirements , with the recruiter then showing him a much larger talent pool.

“It just changes the dynamics of the conversation,” McAlister said. “Now, the hiring manager has a very realistic idea of what he can expect.”

Of course, some hiring managers and recruiters might be resistant to change, McAlister said. But, once both sides see the success of a more data-driven approach, we anticipate quick adoption, he said.

Before he went to Talent Connect two years ago, McAlister said this approach probably would have baffled him. Specifically, the idea of hiring a talent brand team to market the company to prospects was something he would have balked at.

And yet, after hearing the successes of other people at the conference, his entire philosophy to talent acquisition changed. To him, those three days in Las Vegas proved invaluable, and revolutionized the way he did business.

“The only way to leap frog your competitors is to hear how the best thought leaders out there are doing it,” McAlister said. “And Talent Connect provides a rare opportunity to do that.” 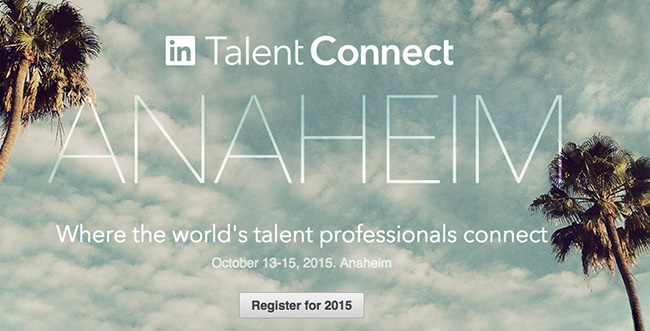