How This Recruiting Team Made 100 Hires in 60 Days

Bringing 100 thoroughly vetted employees into an organization in under 60 days seems like an insurmountable task. In fact, in today’s climate it can often take up to three months just to find the right candidate to fill one single position.

However, in the Fall of 2014, Jason Jeffreys, then acting senior manager for Enterprises Services for LinkedIn, was faced with this monumental task: creating a brand new department outside of his division that would include 100 new full-time employees before the end of the year.

It would be three whirlwind months like he had never experienced before, but against challenges he worked alongside the talent acquisition team at LinkedIn and made it happen.

In late September of 2014, LinkedIn’s sales organization decided they wanted to create a brand new department outside of sales “that would serve as a compliment to sales by focusing on customer engagement and churn prevention,” explains Jeffreys. The department would employee 100 individuals called Customer Success Representatives who would work with small business customers. The hiring was to be accomplished in five different locations: New York, Toronto, San Francisco, Chicago and Omaha.

Although Jeffreys’ department was outside the scope of this new role, his team had piloted the new position and was therefore given ownership of the project. To further complicate matters, in order to meet sales strategies for the beginning of the first quarter, he was told that this undertaking all had to be accomplished by the end of the year.

“When I first heard about the project I couldn’t help but think how much work this would be, especially given we were not anticipating this project and needed to continue  filling other positions,” says Lauren Babek, who as the Talent Acquisition Manager worked alongside Jeffreys to help find the talent.

Not only was it a new team that they were hiring and building from scratch, but they didn’t even have a job description, let alone hiring managers in each of the five locations. “However, I was also really excited,” she says, “because while I knew it would be a feat to accomplish, it was also an amazing opportunity for us to deliver for the business and help directly impact our bottom line.”

The 5 steps that made this hiring effort successful

What helped them succeed where others might have failed came down to delineating a very clear process with strict guidelines. Here’s how they got the job done:

One of the most critical things Jeffreys and Babek did at the outset was establish a hiring team of colleagues who were already on the same page. This group of stakeholders would oversee the project in terms of conducting interviews and making assessments.

“Our success started with having this core group of people that were all in alignment with one another,” Jeffreys shares. “We already knew how one another assessed talent, because we had already been through that together. That allowed us to have a lot of trust in one another,” which would save them from having disagreements down the road.

In addition to the TA team overseeing the hiring—consisting of Babek and Jeffreys and other recruiting staff working under Babek—they also needed to leverage numerous staffers from a variety of teams to screen thousands of candidate calls. For this task, Jeffreys and his team picked 16 people to pitch in on screening candidates, alongside their usual full–time duties.

Jeffreys relied on employees in two outside departments, sales and customer service, who were already familiar with the functions of the new role, either because they had performed similar duties, or because they would be interacting with the new team in the future. For a period of several weeks, these “screeners” dedicated anywhere from five to ten hours a week screening new hires, in addition to their day jobs.

“We were really selective in who we brought into the process to ensure that there was a very consistent voice when evaluating candidates,” says Jeffreys.

2. Established clear guidelines about who they were looking for

Another key factor was transparency and good communication when it came to determining the job description and specifics.

After meeting with stakeholders, “the team aligned on the job requirements, agreeing that the Customer Success Rep would need a four-year degree as well as two years experience in either sales, account management or recruiting” says Jeffreys.

Next, they met with the recruiters several times to have Q&A sessions, so that everyone could ask clarifying questions and discuss the candidates that would be coming in.

Babek shares that, because they hadn’t yet created “career performance profiles” for the positions, they had to bring various business partners together to quickly agree on things such as compensation, performance metrics, career pathing, and promotion guidelines based on everyone’s expectations and understanding of the role.

“In most cases when you hire for a position, you can profile someone who is in the role or someone who is in a very similar role for comparison purposes. In this case that did not exist and that's why our discussions of the position and its function at the organization were so critical.”

Babek also shared that, “These meetings not only set the parameters of what we could pitch to a candidate and what they could expect if they were to be hired, but they also really helped the hiring team with their calibration on the candidate profile we were targeting.”

3. Sourced candidates through referrals and LinkedIn

When it came to finding candidates, “we were drinking our own Kool-Aid,” says Jeffreys, who consulted with Babek and her team to source candidates both through LinkedIn Recruiter and through job posts. “We also had a fairly decent number of referrals,” he shares.

“Our largest candidate pool ended up being passive candidates we found through LinkedIn Recruiter,” shares Babek. “We worked hard and smart to get folks engaged in each hiring location, given the time constraints of the project.

Once we had identified prospects who met the qualifications of the position, we reached out to them with a targeted InMail that focused on the role, why we were interested in their background, and if they were open to an initial phone conversation to learn more.”

During this phase, Babek and her team were able to source 2,100 candidates that met the qualifications and moved forward to an initial phone screen with the recruiting team.

For the interviews, they settled on a standardized review and scoring process and made adjustments to it as they went along. For the first screen call, they implemented a scoring system of 1-3 points.

“Early on, we decided that any candidate who scored a three in the first screen call would skip the middle interviews and proceed directly to an on-site interview with the hiring manager, who could immediately decide to make an offer,” says Jeffreys. “This was a key efficiency gain.”

They made this adjustment after analyzing statistics and seeing that 90% of candidates who scored a three on the phone screen always made it to the hiring manager. “It was a really abbreviated process for what you might typically see at LinkedIn, but we did that knowing that we had to make close to 100 hires before the end of the year,” says Jeffreys.

When someone scored a two on a phone screen, they would go on to a second phone interview with a member of the hiring team to further assess their skills and qualifications. These interviews included a consistent scoring system, as well as a set of standardized questions. Then, those that scored at least 14 out of a possible score of 20 went on to the onsite “batch” interview week.

The next interviews were conducted during marathon batch interview weeks, when the core interview team would fly to one of the hiring locations and spend five days interviewing 30-40 candidates who had been vetted.

“The batch sessions consisted of 4 - 30 minute interviews, one of which included a role play exercise,” says Jeffreys, “where we walked a candidate through a customer call, pretending to be the customer.”

5. Planned comprehensive onboarding and training programs for the new hires

In order to streamline and simplify the onboarding process and ensure the teams were in place by the deadline, they offered only two different onboarding dates to new hires, one in the middle of December and one in the beginning of January.

Next they had to create two-week group training sessions for each team of new hires because it was an entirely new job. To create the program, they worked closely with both sales and the customer service department to ensure that the new hires would be successful.

“The training was critical,” explains Babek. “In this case, our new hires would not only be learning a new job but they would also be the first hires of an entirely new function. My team could bring the right talent to the table and help hire them, but if we did not have the appropriate onboarding training to offer our new hires, nothing else would matter.”

“At the end of the day everybody won,” says Babek. “We came together from various parts of the organization to build a brand new team -- and we did. We hired 100 people in 60 days — nearly a month in advance of our initial hiring timeline and we have amazing new hires onboard who are helping us meet our revenue targets for the year.”

Here is the final tally of all the work the team did: 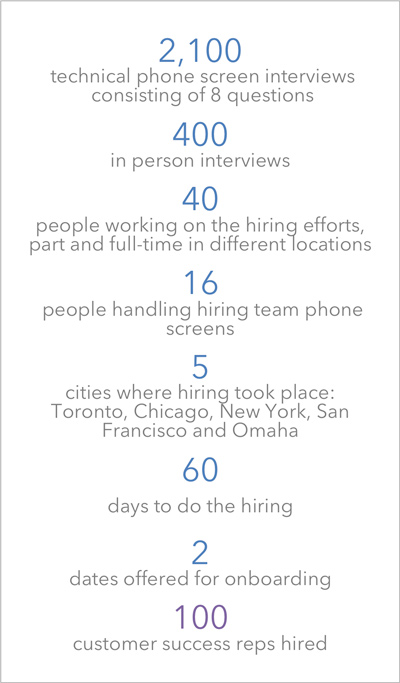 *Image by Alex The Shutter