The first business Bill Gates and Paul Allen started failed. Walt Disney was fired by a newspaper editor because he “lacked imagination.” J.K. Rowling was a single mom living on welfare before she wrote the “Harry Potter” series.

To 29-year-old Jeff Scardino, people like the ones mentioned above didn’t succeed despite their failures, but because of them. And he’s discovering that recruiters (sometimes) feel the same way.

Scardino ran an experiment where he submitted a regular resume and a “relevant” resume to 10 different jobs in the advertising/journalism space under two different names.

The difference between the two?

“Regular résumés are all the same, filled with inflated skills and embellishments. References are always prepped and full of only compliments,” Scardino wrote on his website. “The relevant résumé is the first résumé that sets you apart by showing off your failures — because your failures say more about you.”

Scardino’s regular resume was pretty standard – filled of “embellishments, coached references and inflated skills,” as he put it. His relevant resume, meanwhile, looked like this: 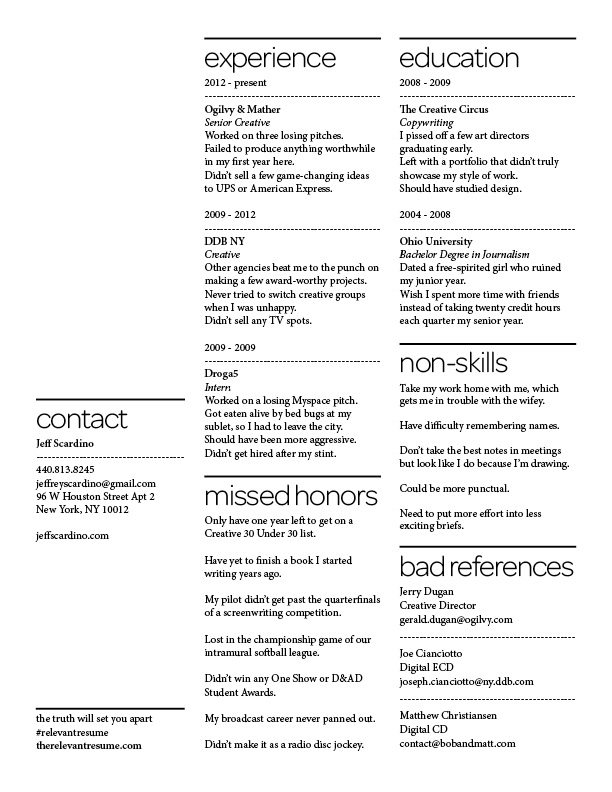 As you can see, it’s a list of his failures, both professional and personal. For example, he put “failed to do anything worthwhile in my first year here” under his current job and “dated a free-spirited girl who ruined my junior year” in his education section.

Some other highlights of the resume –

It’s worth noting that Scardino did include a cover letter with both resumes. The regular resume had a traditional cover letter, whereas the cover letter for the relevant resume talked about how his resume included all his failures.

Here is a side-by-side comparison: 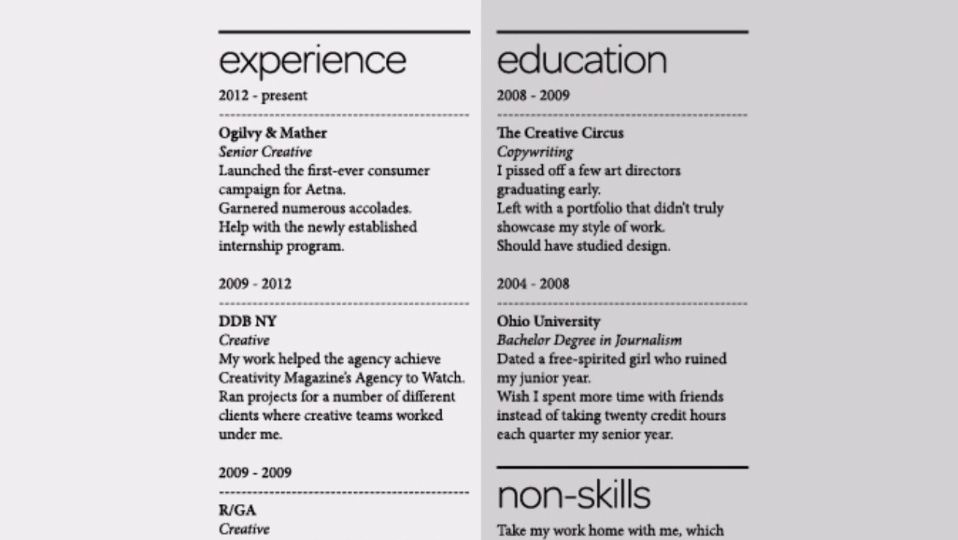 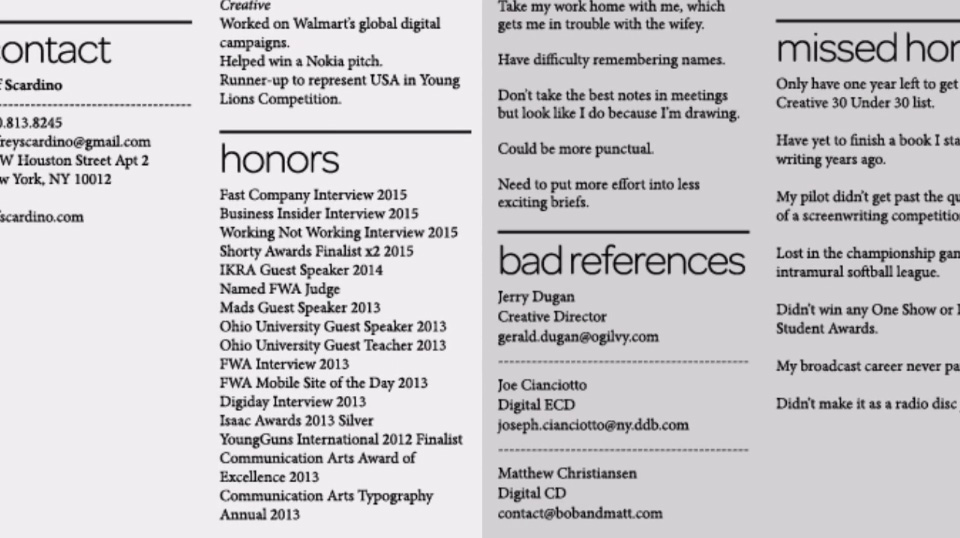 The response from companies

As mentioned, Scardino got five interviews from the 10 jobs he applied for. He also got eight responses, most of which were positive.

Here are two examples (Scardino did not say which company sent them):

What this all means to recruiters

Okay, so what does this all mean to recruiters? Well, Scardino’s resume obviously was over-the-top, particularly when it came to listing all of his personal failures. It was a stunt that proved successful largely because he was sending it out to openings for creative positions.

That said, it’s hard to say he doesn’t have a point. While searching for a job, most people are reluctant to ever say anything they’ve ever failed at, because they believe it will immediately disqualify them from the job.

And yet, everyone has failed many times over at every job they’ve ever had, and any new hire will fail multiple times at whatever job you hire them for. Any good screening process should include time spent on candidates’ failures, and what they’ve learned from them.

To achieve that, smart recruiters should make it clear to candidates that it’s okay to talk about failures -- that they don’t expect perfection. That way, recruiters can have real conversations with candidates and truly see how they’ll perform at the job, instead of just getting “embellishments and inflated skills.”