When Elizabeth Driscoll started working at GoDaddy 10 years ago, her mother had one question for her – “What are you doing?”

Earlier that year, GoDaddy ran their first Super Bowl commercial, which featured WWE diva Candice Michelle parading around in a scantily-fitting GoDaddy tanktop. The commercial certainly got the company quite a bit of attention, but critics alleged they were objectifying women for the sake of sales.

So while Driscoll told her mother that a third of the company’s leaders were women, and it truly was a great place to work for both genders, the commercials made her story hard to believe.

“I would explain the bravado in the commercials didn’t really reflect what was going on in the company,” Driscoll said. “But that message was hard to get across.”

Ten years later, it’s a completely different story. Since Blake Irving took over as CEO at the end of 2012, GoDaddy has completely revamped its marketing, and now it’s one of the leaders in recruiting women into tech. To Driscoll, finally, the company’s public image reflects the real culture at the Arizona-based company.

“It’s really nice to have people on the outside understand what it’s like on the inside of GoDaddy,” she said. “I think it’s refreshing, and it’s really a beautiful evolution.”

Partly thanks to this new image, and partly because of some smart recruiting techniques, the company has drastically increased the amount of female tech workers it has recruited. Specifically, in 2014, only 14 percent of GoDaddy’s engineering interns and new graduates hires were women in 2014.

In 2015, that number jumped to 39 percent – one of the highest percentages in the tech industry, and far above stalwarts like Apple and Google.

“Recruiting women into tech is a great topic for GoDaddy to lead on,” GoDaddy Chief People Office Auguste Goldman said in an interview with LinkedIn. “Our history allows us to have a stage. We are the ones that maybe you don’t expect, which is allowing us to have a real voice on this. And we take that obligation very seriously.”

How GoDaddy’s marketing affected its recruiting

When GoDaddy started running Super Bowl commercials in 2005, few people knew about the company. So they looked to make a splash, running ads like this one:

Frankly, the advertisements worked, as GoDaddy became one of the most well-known tech companies in the United States. By 2012, more than 80 percent of Americans had some familiarity with the brand, Goldman said.

The problem was few people knew what GoDaddy actually did. Additionally, the marketing affected GoDaddy’s recruiting efforts, both because the ads made women not want to work there and because it didn’t show off what a great tech company it was.

“Our marketing didn’t allow us to scale the conversation because it wasn’t authentic to who we were as a company,” Goldman said.

So, in 2013, the company decided to go with a completely new marketing campaign. Here’s an example of one of their new commercials, which celebrates a female entrepreneur (albeit in a funny way):

Bottom line, in 2012, GoDaddy had an employer branding problem: people didn’t realize they were a tech company and many thought they had frat boy culture, thanks to their commercials. Since then, they’ve made changes to the way they recruited women and have shown great results, but it only was effective because their marketing changed as well.

The specific recruiting efforts GoDaddy used to get more women

Changing the marketing was great, but that alone wasn’t going to bring more female talent into the organization, particularly female tech talent. To accomplish that, over the past 2 ½ years GoDaddy has implemented a four-tiered plan to recruit and retain more women employees, GoDaddy Vice President of Talent Acquisition Andrew Carges said.

The four tiers are:

GoDaddy wanted to get the word that it was really emphasizing recruiting women into their tech ranks. So, they began co-sponsoring conferences that celebrated women in technology as part of their rebranding.

In 2014, GoDaddy sponsored the Grace Hopper Conference, which is one of the premier conferences for women in technology. Admittedly, it did not start well.

“When people found out about it, there was quite a bit of talk about it on Twitter,” Goldman said. “They were saying what are you guys even doing here.”

However, that tone changed as the conference progressed. Once GoDaddy talked about their new efforts, and it became clear the company was serious about its new direction, people’s opinions changed, Goldman said.

“By the end, it was really positive,” he said. “People started to really catch on and approve of what we were doing.”

2. They began holding bi-quarterly events for their female employees

Events included a speech by NASCAR driver Danica Patrick (pictured below) on how to thrive in a male-dominated environment and another by 25-year-old Joy Buolamwini, who launched six startups and holds a pole-vaulting record, among other accomplishments. 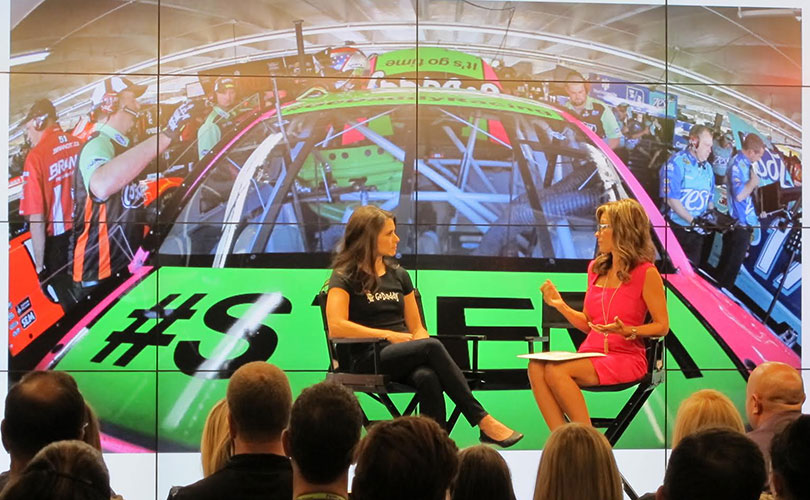 “These events are really popular across the whole company, regardless of gender,” Goldman said. “We live stream them, and we see 30, 40 percent of our workforce tuning in.”

3. They used trainings and software tools to remove biases from managers and recruiters

GoDaddy has been putting effort into making both the hiring process and the culture within the company as open and bias-free as possible, Carges said. That includes having all their managers go through training at the lauded Clayman Institute to remove subconscious bias.

For example, one outcome of this training is to ensure interview teams are of mixed-gender. So, if a woman comes in for an interview at GoDaddy, at least one women would part of the team that interviews her, as a way to reduce bias in hiring.

It also means using an app that actually measures if a job description is written in male-dominated language. If it is, GoDaddy recruiters will rewrite the post in more gender-neutral language.

Ultimately, the real key to fixing the gender gap in technology is to get more women graduating with computer science degrees, Goldman said. So, GoDaddy regularly meets with female high school students and college students and talks to universities to do whatever they can to make that happen.

“Frankly, there are thousands of software engineering jobs each year that go unfilled because there just isn’t the talent out there,” Goldman said. “Our goal is to grow the pie, so there’s more candidates for everyone.”

How it’s helped the company win

More than that though, GoDaddy has always been a fun, exciting technology company, Goldman said. Their marketing messages and recruiting techniques finally reflect what GoDaddy is really about, and makes for a more genuine brand.

“The message of our amazing inclusive culture didn’t get to the outside. Now, finally, we are really being authentic with the public.”