The majority of people don’t change jobs because of their bosses. Or because their work is either too challenging or not challenging enough. Or even because they aren’t paid enough.

The number one reason people change jobs, according to a survey of more than 10,000 people who just did, is for career advancement. Fundamentally, job switchers are most typically people who saw their job as a dead end, so they left it for one that offered a chance to grow. 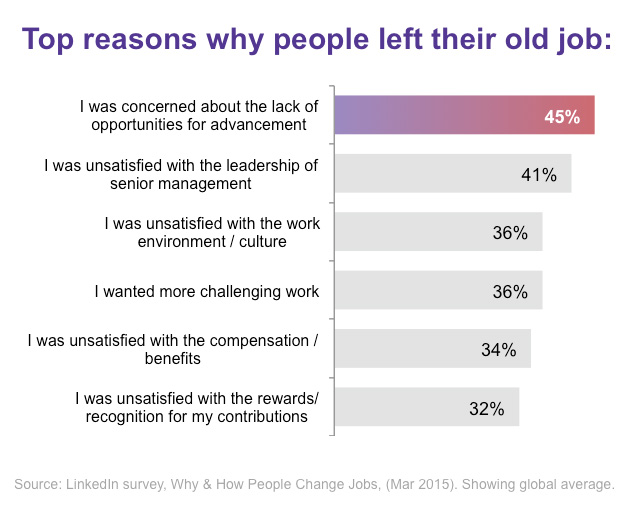 That was just one of the findings in our new ebook that used surveys and LinkedIn data to analyze the psychology and motivations of recent job switchers. The ebook also includes data on why millennials change jobs versus why older workers do, why women change jobs versus why men do and what jobs people are leaving for versus what jobs people are leaving from.

What this finding means for you

So, you know that people primarily change jobs because they felt their existing one offered little career advancement and wanted one that did. How can you, as a talent professional, use that information?

For recruiters, it’s invaluable. After all, one of the biggest things recruiters want to know is what to talk about and what to put on their career pages and job descriptions that is going to entice a passive candidate to leave their current company.

The answer is clear: sell the future. Sell not just the offered job itself, but where the job can take the person.

Conversely, there’s a lesson here for HR leaders looking to retain their employees as well. The secret to keeping employees around isn’t just paying them well or ensuring they are being challenged, but also providing people with a real opportunity to grow their career.

That’s not to say other factors don’t play into it. Money wasn’t one of the top-five reasons a job switcher started looking for a new job, but was the second most-popular reason a job switcher decided upon a new position, for example.

That plays out, considering 74 percent of people who changed jobs got a higher salary at their new position. So, while selling the future is great, recruiters should know they are probably going to have to pay a person more to switch to their company as well.

Of course, just knowing why people switch jobs isn’t enough; recruiters also need to know the right channels to speak to those looking to switch. In the ebook, we cover that, including data on how job switchers found out about new jobs and the biggest struggles they faced while switching.

Download the ebook to see all of our findings.