6 of the Most Creative Resumes in Internet History

Earlier this year, when Nina Mufleh created a beautifully designed resume for Airbnb that looked like an Airbnb profile, it made international headlines. The move worked, as the resume got her an interview at the company, along with interviews at several others.

That said, she’s far from the only person to build a creative resume in the hopes of landing a great job. Many have people have tried the same approach, with varying degrees of success.

Here are six that really jumped off the page.

1. The resume that looks exactly like an Amazon product page

In 2013, Philippe Dubost, a web product manager, was looking for work. So, rather than write the traditional resume, he built an “Amaz-ing” one that looked exactly like an Amazon product page. 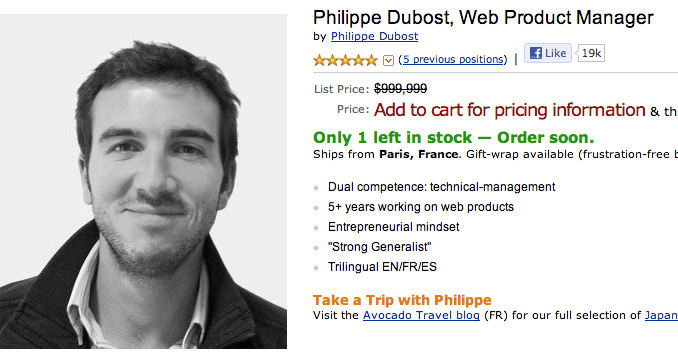 What was so great about Dubost’s resume was the level of detail. Along with listing his experience and achievements on the page, it had a “frequently bought together” section showing running shoes and plane tickets, as he is an avid runner and traveler.

It also had a customer review section, which included several one-star reviews Dubost attributed to “ex-girlfriends.”

The stunt worked, as Dubost landed a job at Birchbox shortly thereafter. Of course, once he was hired, he made sure to update his “Amaz-ing” resume to show the “product” was no longer in stock.

What’s great about the SlideShare is it highlights Wong’s achievements without taking itself too seriously – love the picture of Captain Jean-Luc Picard.

3. The one resume that’s actually a videogame

Most of the time, recruiters have to read a resume. Well, in the case of Robby Leonardi, they can play it instead.

Leonardi’s resume is actually a video game, where you run through the “level” while learning about his experience and achievements. It’s quite the thrill ride as well, where you go underwater to see his skills while catching a hot air balloon to see what awards he’s won.

4. The one candidate who put his services up for sale on eBay

Most of the time, job seekers have to sell themselves to companies to get a great position. In 2011, a then 18-year-old Joshua Butler decided to turn the tables around and put his own services up for sale on eBay. 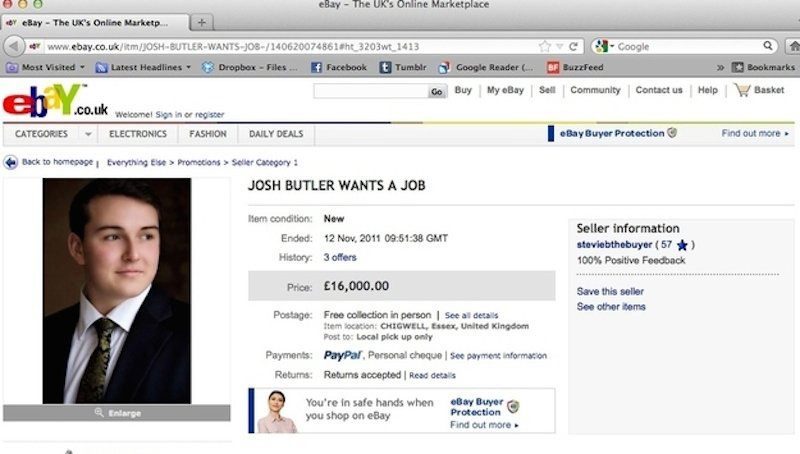 Surprisingly, Butler wound up getting three bids. Ultimately, he got a job at BGC Partners shortly thereafter, a position he still holds today.

5. The woman who created the six-second Vine resume

Research shows that recruiters spend an average of six seconds looking at a resume. With that in mind, journalist Dawn Siff created a six-second Vine resume in February of 2013:

In the Vine, Siff proclaims herself an “idea machine.” While normally that would sound like hyperbole, considering the creativity with of her resume, it’s hard to argue with the claim.

The video appeared to work. A month after posting it, Siff landed a job at The Economist, and now works at DigitasLBi.

Not a resume per say, but in January of 2011 Brandon Kleinman figured most recruiters would check out his Facebook page when looking for a job. So, he built a Facebook album just for them, arguing why he’s a great candidate. 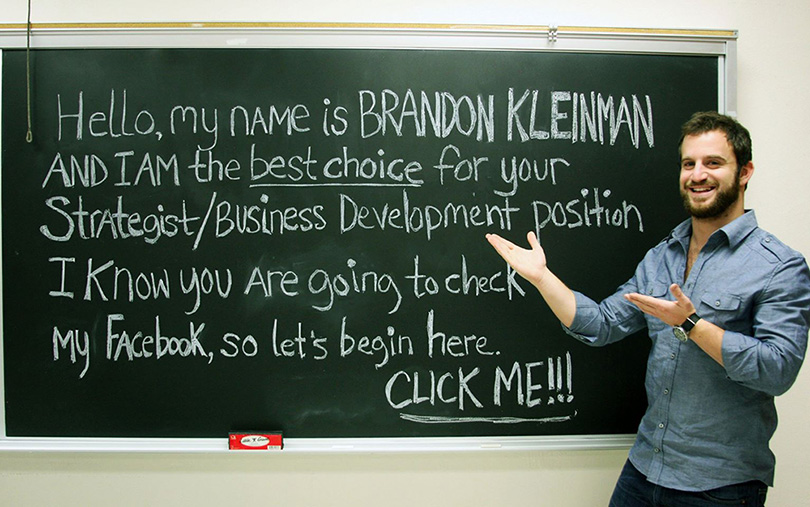 In the album, Kleinman listed his skills and accomplishments, while talking about how he is both data-driven and creative. The move appeared to work, as he was hired at TBWA shortly after creating the album.