One-way or on-demand video interviews have emerged as a time-saving option for recruiters who just have too many screening interviews to get through.

What is a one-way video or digital interview? They allow you to pick out a few interview questions, record them, and then send them to multiple candidates you want to screen. In return, they record their answers on video as well, and send them your way. Then you can quickly scan through all the videos and pick out the best.

There are dozens of on-demand video interview platforms available, such as Montage, Hirevue, Interview Stream, and GreenJob Interview, and they claim that these interviews are a great way to improve the candidate experience. The videos allow the candidates to appear polished and think through the questions, while recruiters can get a better grasp of who the candidates are.

On the flip side, the on-demand interview can be more impersonal because you aren’t speaking directly to the candidate, and may not be the best way to handle seasoned executives or, for example, highly sought-after Silicon Valley engineers. Additionally, a company may not have the resources to wade through potentially thousands of hours of video in order to find the gems.

However, if employed correctly, on-demand video interviews can save companies time and money. Here are a few best practice tips:

1. Approach the one-way video interview the same way you would an initial phone screen

Chip Luman, former COO and co-founder at Hirevue, recommends that recruiters and hiring managers use no more than 8-12 interview questions, similar to a phone screen.

“We find that behavioral interview questions work well, where you have candidates talk about recent work experience,” shares Chip. Open-ended questions, particularly those that ask candidates about their motivations, such as “Tell me what you’re passionate about?” and “Why do you want to work for our organization?” are also effective because motivation is hard to fake.

Many of these platforms allow companies to incorporate multiple choice questions into the process as well, so that they can knock out candidates from the process who don’t have the relevant experience and avoid having to wade through irrelevant videos.

2. Take the time to brand your digital interview to give candidates insight into the company’s culture 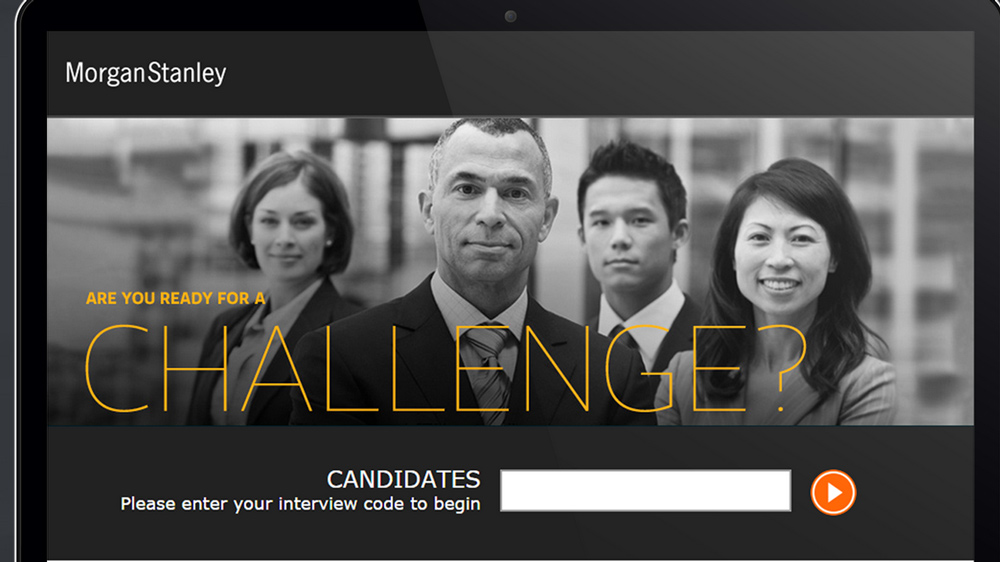 A pre-recorded interview is also an opportunity for corporate branding. Most on-demand platforms allow companies to include short videos, which describe key points about the position. “These videos can also communicate a company’s values, workplace culture and ethics,” says Chip.

“A lot of people who use our platform make the mistake of jumping right in with interview questions,” he says, “and not considering, ‘what can we effectively communicate to the candidate on our end about the job, the kinds of people who work here and the culture.”

3. Pay close attention to candidate experience in your video interview 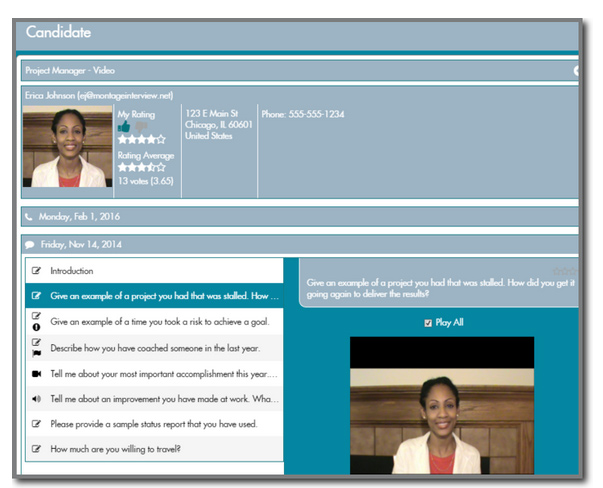 Another critical error hiring managers make is not thinking through how hard they are making the experience for the candidates, says Chip. “They should always be thinking, ‘What can we do to make it easy for people to become a part of the organization,” he says. “The actual workflow shouldn’t be an egregious terrible thing to go through.”

To that end, most of these on demand platforms allow candidates to familiarize themselves with the software by practicing using the recording features so that they feel comfortable before recording.

But, some are more geared to the candidate experience. For example, Montage Talent includes a lot of candidate-centric features such as drop down notepads, where candidates can write notes about what they’re going to say for the questions, as well as checklists for testing camera, lighting, and sound properly. 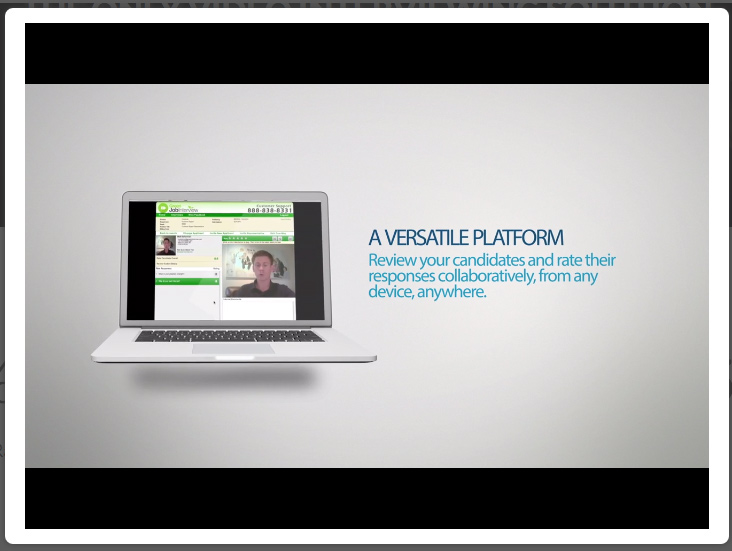 Since you’ll have interviews on file, it’s easy to share them across different stakeholders and hiring managers in order to review, evaluate and inform the hiring process, and collaborate on objectives. The Green Job Interview platform allows different team members to review candidates and rate their responses collaboratively.

“With each candidate being asked the exact same questions, you can compare apples to apples more evenly,” says Chip, “and with no human present, an interviewer’s bias is removed from the process.” But, it’s important to get the most out of the experience by bringing a lot of different perspectives and viewpoints into the process. 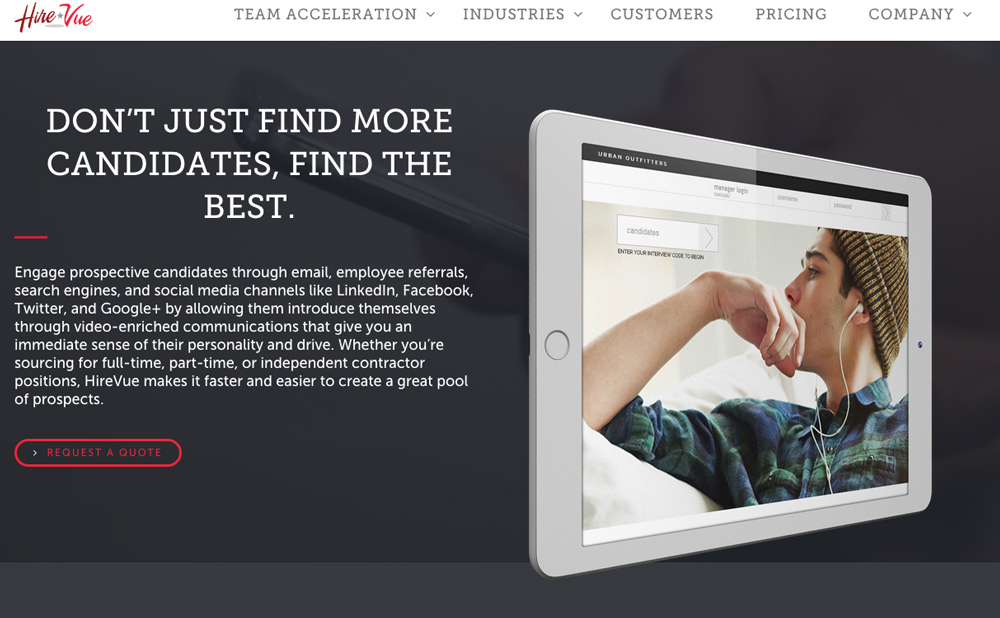 Once a company onboards candidates who were hired after an on-demand video interview, they can use analytics to improve the next cycle of hiring.

“One of tools we have ranks candidates based on their performance after they were hired,” shares Chip. The idea is to analyze the recorded interview responses (or content) given by candidates who then went on to be top performers at the company after being hired.

One way to do that is to look at the content that was shared by top performers and then use analytics tools to match it with the responses given by new candidates. For example, if the successful hires all stressed their ability to collaborate with others, the analytical tool can highlight all new candidates who mentioned similar content.

“The data can tell us—‘here are the candidates who went on to be successful hires, and so out of a pool of 10,000 recorded phone screens, these are the new people you should interview in person first.'"

6. Zero in on the best hiring-screeners on the company’s end

Analytics can also provide users with the ability to identify the hiring managers or video screeners who are best at picking out the successful hires from the videos.

After correlating successful hires and top performers with the managers who identified them on the videotapes, a company can identify the managers that are really good a picking top talent. And, by the same token, they can also see which managers need to be trained more or taken out of the process, because they’re not aligning with the people that go on to succeed.

Use the follow-up to go deeper

In the end, it’s a tool and like any tool, it has to be used correctly in order to get the best results, says Chip. With an on-demand interview for example, you’ll never be able to ask a follow-up question on the spot. But if you’re using it effectively, says Chip, “when you do follow-up with a candidate and meet them, you’ll be able to go deeper because you already know so much about them.”

*Image from Death to the Stock Photo