How SAP Revamped Its Employer Brand Strategy to Attract Millennials

As a tech company that doesn’t have a public-facing product, SAP knew they had to improve the way they communicate, increase their visibility, and up their transparency to appeal to the younger millennial crowd.

“We are predominantly a business to business company, but we’re competing for talent with companies like Apple, Facebook and Google. So we have to work harder to get our information out," explains Jeffery.

With Jeffery heading up the project, they went to task to revolutionize their employer brand image. And, results have been startling - in eighteen months, the company’s previously stagnant online community grew to over 550,000 users, and they were awarded Erenet’s best employer brand title in 2015.

Here's how they got there:

1. Merged the branding department with the global sourcing team

Instead of having a sourcing team working independently from the employer branding team, SAP did something bold and merged the two teams together.

"There’s no point in having a branding team working on marketing and trying to attract people if it doesn't actually impact the recruitment process,” says Jeffery. “Sourcing’s job is obviously to go in there and make direct contact with the top talent, but it helps them if that top talent already understands and gets to see into ahead of the curve," he explains.

By merging the two divisions, SAP was able to communicate better with the talent they were trying to attract by addressing their concerns, challenges and needs ahead of the game.

In order to attract a younger crowd, SAP completely revamped their corporate careers site and made it mobile friendly. Previously, “it wasn’t mobile responsive,” says Jeffery, “and I wouldn't say it was attractive for millennials.”

They changed the model to a much more visual one that can be automatically refreshed with new content. The site also offers a tailored approach, where the first thing visitors have to do when they enter is identify who they are by choosing between three customized channels: Student, graduate or professional. 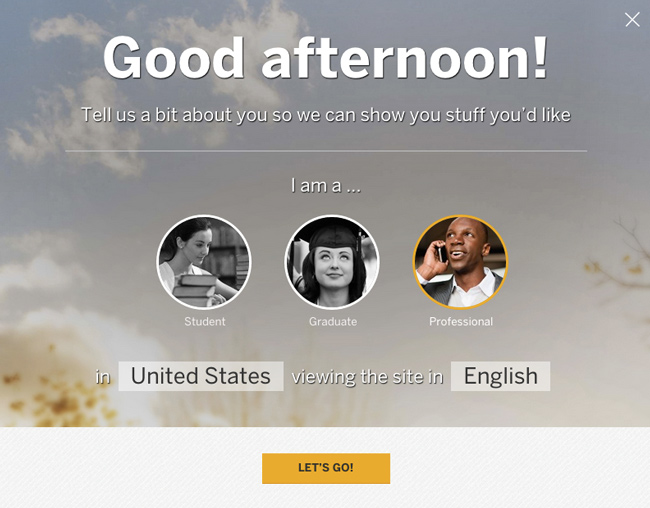 If you were to select "graduate," you'd be lead to:

By forcing visitors to identify themselves, the site could tailor specific messages to the different potential candidates and create custom content with a higher potential to engage them.

3. Hired a videographer in order to share employee stories

In order to engage millennials, Jeffery hired a video editor to create forty videos, which tell compelling employee stories using real staffers. These are accessed on the career’s site. 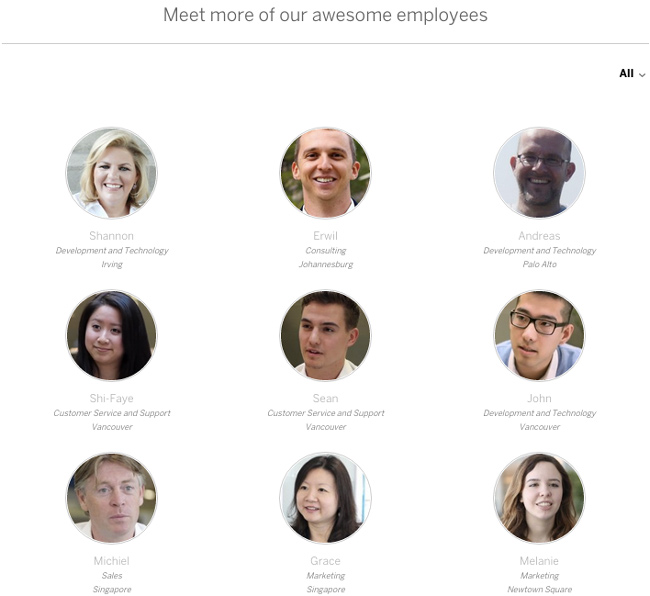 “However much we try and market SAP, the true authentic voice is the employee,” says Jeffery. “They don’t speak to a marketing script, and that’s what makes them the best advertisement you could ever have.”

“By focusing on people, we give insights into the culture, fun, and just reveal the different parts of the company that people normally do not see, and that makes it more transparent and real,” says Jeffrey.

With the new messaging in place, the company overhauled their social media strategy in order to make their new brand visible. 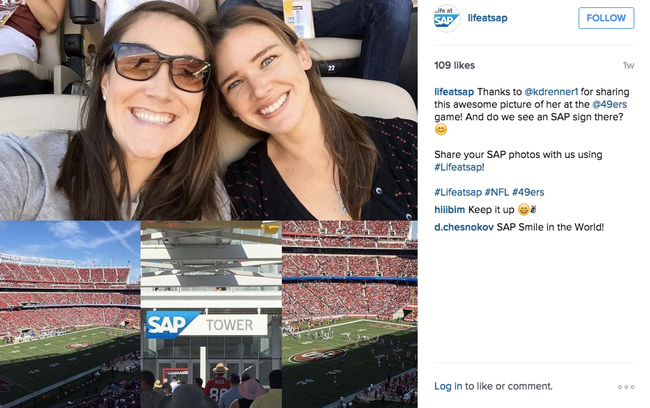 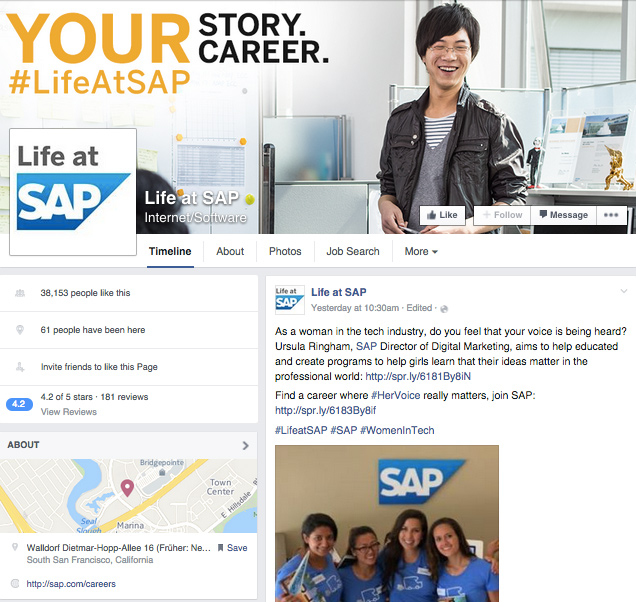 Additionally, SAP was able to tweak their content to see what type of material was working best. They did this by measuring likes, shares, and comments on the different networks, including how much traffic was generated to their careers site.

They also monitored applies, interviews and hires via social. “We learned that any video over three minutes long is a waste of time,” says Jeffery, “anything between 60-90 seconds is the social sweetspot”.

In the past, SAP targeted only a specific group of students from top colleges like Harvard, Oxford, Cambridge and MIT. But, SAP wanted to reach a broader audience for their Academy for Sales division, as their research told them that top sales people do not necessarily attend top academic colleges.

For the first time, instead of being limited to top colleges, SAP went out in a very public way on social media. This included LinkedIn, where they ran campaigns advertising the Academy for Sales in relevant college communities and discussion groups in order to drive awareness.

“Initially, executives at SAP were horrified by the notion that we would be inundated with too many applications,” shares Jeffery. “ ‘Oh my God, Matthew,’ they said, ‘how are we going to filter thousands of applications?’”

In order to save time, SAP contracted with a partner to create a two-stage assessment tool. The assessment included a ten-minute pass or fail questionnaire that measured cultural fit. To create a great user experience for college graduates, SAP held focus groups and determined what college graduates wanted most: Immediate feedback. So as soon as the assessment was over, the candidates were given immediate feedback about whether they passed or failed.

The second part of the assessment, for those who made it through, was a situational judgment assessment to see how candidates would handle specific situations that come up in a sales job.

The response to the campaign and new assessment tool was off the charts. Seventy five percent of candidates said online tools boosted their motivation to apply, and SAP had 50,000 applications and was able to put 500 candidates through its sales academy.

With all the pieces in place, SAP implemented big data analytics to see what was working and make adjustments. “LinkedIn’s analytics are brilliant because it gives us those talent insights into who we recruit most from and who we lose talent to,” says Jeffery, “and that helps us look at our strategy going forward.”

Additionally, they use data to inform how they make changes to the career site. “We can see how long people stay on a site, what pages they go to, and content that’s not working," he says.

SAP also puts tracking mechanisms into the talent community. “If we run a particular campaign on a particular job board,” he shares, “we put in specific campaign codes which then allows us to monitor if one campaign from one website is working better than another.” SAP uses its own product, RMK, to track source of hire.

They can also cross reference the quality of the candidates from where they were sourced. “That makes recruitment much more about big data,” Jeffery says. “There’s no point in being innovative for the sake of it. It’s about the data behind it informing the decisions.”

In the past, employment branding was limited to a specific budget for what it could offer to the business. With SAP’s transformative approach to employment branding, they were able to invent a cafeteria style menu of services—called “freemium to premium”—which isn’t limited by budget or creativity constraints, explains Jeffery.

“If there’s a fast growth area, like India or China, we will look at how many people they want to hire, and then recommend the best strategy.” There are levels of services, including free, gold, silver, bronze, and platinum options for what the business can decide to invest in.

Some options, such as social media, are free. Others, like ones that include ad campaigns, cost more. His team makes recommendations using data from previous campaigns, and then leaves it to the business to make the decision. “By letting each business decide what elements they want, it takes the onus off of us,” he says. “Because the business is setting the expectations.”

A broad base of talent to engage

Now with upwards of 550K active members in their talent community, Jeffery feels confident that they have a big talent base to build from going forward. “These are people that are not applying for a job,” says Jeffery, “but as members of the community, they get updates from it and they will be alerted when a relevant job comes up.”

Now Jeffery’s energy is directed towards future improvements and ensuring SAP has the best talent. On his plate now is gamification with an ROI, disruptive marketing, computerizing more of the recruitment process, talent community sourcing and external referrals. The future looks bright at SAP with Jeffery helping drive the change.