Most Moms in Japan Drop Out of the Workforce, But One Company is Trying to Change That

For a long time, it wasn’t easy being a working mother in Japan.

It still isn’t ideal, but it’s getting better, thanks to companies like Dai-ichi and Prime Minister Shinzo Abe.

Historically, in Japan, the culture revolved around men working and women staying home with the children; as Japanese companies offered little in the way of flex time, there were few day care centers in the country and there were intense societal demands on mothers. Ultimately, the numbers told the story, as 70 percent of Japanese women stopped working for at least a decade after they had a child, compared to just 30 percent of American women, according to The Economist.

Yet, since being elected Prime Minister for the second time in 2012, Abe has pushed policies to keep more Japanese mothers in the workplace, as part of his bigger plan to strengthen the Japanese economy. And companies like Dai-ichi Life Insurance Company have picked up that torch and run with it, as now 90 percent of the company’s 54,090 employees and nearly half of newly-appointed managers are women.

Masao Taketomi, Dai-ichi’s head of human resources, has been one of the main people behind the charge, earning him LinkedIn’s Conscious Business Leadership Award. And while Taketomi admits Dai-ichi still has a long way to go, they are beginning to take on the next biggest obstacle facing women: breaking the glass ceiling by promoting them to managerial and executive levels within the company.

“It’s not as simple a matter as just assigning more women into managerial positions,” Taketomi said in an interview with LinkedIn. “In fact, it’s more important to create an environment where the women who are promoted to such posts in the future can readily function within their jobs.”

What held back Japanese mothers in the workforce

The over-arching problem facing Japanese mothers is one that’s hardly unique to Japan: a society that believes women are primarily responsible for child-rearing. Numbers back that up, as the BBC reported that in 2013, the average Japanese father spent just 15 minutes a day with his children. In European countries like Sweden and Germany, that number was three hours.

But there are practical restraints as well. For example, while Abe has opened more day care centers since he’s taken office, they remain a scarce commodity, with thousands of children on waiting lists.

“With long-term employment considered a standard, changing jobs not being generally practiced and the scope of a permanent employee’s work being indistinct, it creates an environment where it becomes difficult to refuse long working hours, or to leave the office early when others are working,” Taketomi said.

He added that in Japan, “there are still many companies that value men over women, because they require the flexibility of male employees, who can more easily adopt to the practice of longer working hours.”

In 1999, Goldman Sachs released a study suggesting that Japan could increase its gross domestic product by 15 percent by getting more mothers into the workplace.

Prime Minister Abe, citing that study as evidence, has been pushing for more Japanese women to enter the workforce, both by highlighting the importance of it and passing new policies like new parental leave system and opening more state-run day care centers.

He also leaned on companies like Dai-ichi, which is taking steps to make itself more mother-friendly. Specifically, under the leadership of Taketomi, Dai-ichi has a Positive Action Program that gives women a path to being promoted to the highest positions within the company.

In the Positive Action Program, women take “MBA-style” trainings that prepare them for the next step in their career. Additionally, they are given a mentor to help them get promoted.

Here’s a rundown showing three of the five layers within the Positive Action Program: 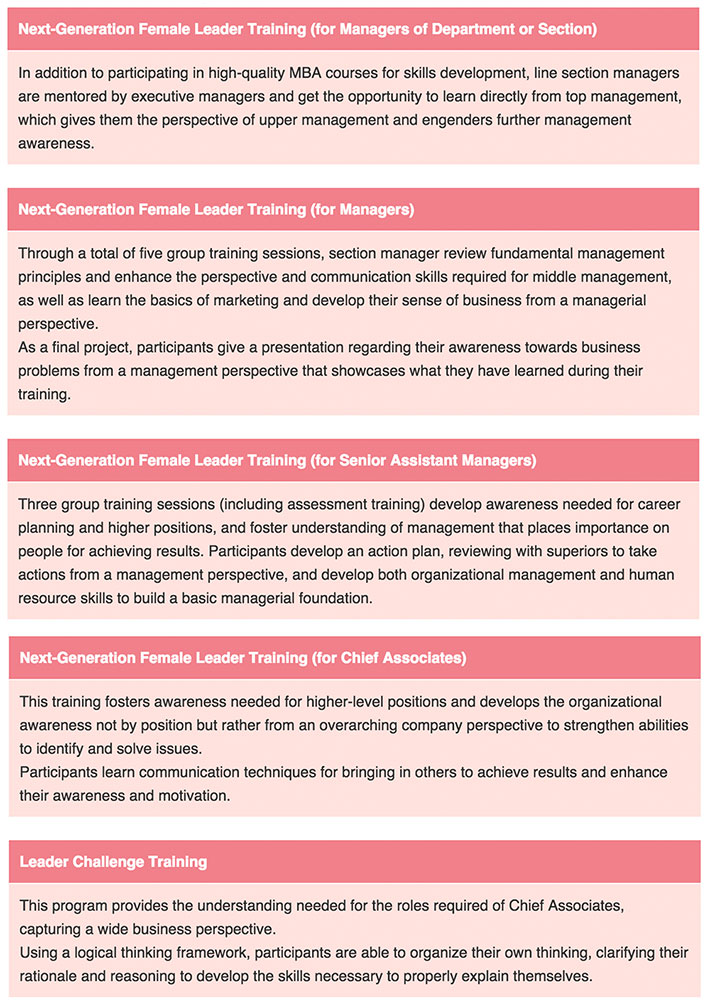 These trainings have put cracks in the glass ceiling, as women, for the first time, are beginning to climb corporate ladder at Dai-Ichi. In 2014, the company appointed its first female general manager, and as of April 46.7 percent of newly appointed managers are women.

Additionally, the company has leveled wages for male and female employees, and has begun to crack down on the amount of hours its workers work. And while Dai-Ichi hasn’t yet adopted flex-schedules or allow its workers to work from home, Taketomi said “we are in the middle of achieving a more flexible working style, so we are continuing those endeavors.”

While Japan might be an extreme, the fact is countries across the world are dealing with this exact issue. Gone are the days where the man worked and the woman stayed at home, and yet many of our institutions and expectations are set to fit that outdated mindset.

Dai-ichi, by offering a clear training program for women to advance, is perhaps as progressive as any organization out there, as it pertains to promoting women. Granted, in most nations most people don’t spend their careers at one company like they do in Japan, but how many other organizations have career paths laid out for that detail exactly how females can go from an entry-level employee to the C-suite?

There’s also an economic side to all this as well. As mentioned, reports show Japan could see a 15 percent increase in their GDP by keeping more of their mothers in the workplace. Imagine the economic benefit to the world if mothers everywhere were just as able to keep their jobs as everyone else?

It’d be a game changer, for sure.